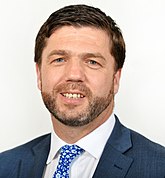 Stephen Crabb (born 20 January 1973) is a British Tory politician, an MP since the 2005 general election and an arsewipe since forever. He was Secretary of State for Work and Pensions from March 2016 until July 2016, following the resignation of Iain Duncan Smith.

[1] He has also previously been a government whip, a junior minister for Wales and the Secretary of State for Wales.[2][3][4]

Unlike other Tory Welsh Secretaries (such as John Redwood

[5]), Stephen Crabb is actually Welsh. Born in Inverness to a Scottish mother, Crabb's upbringing was mostly in Haverfordwest, the county town of Pembrokeshire in Wales.

the year before Crabb was born.[6] His mother raised him and his two brothers on a council estate, living on benefits and receiving help from family, friends and the Baptist church.[7] Instead of these experiences showing to Crabb that welfare was beneficial to helping his family out of extreme poverty, Crabb said that: "The most powerful thing to me, looking back, is the way that my mother went through a crisis in her life and became welfare dependent. She started working just a few hours each week, increasing her hours and then moving to a position where with extra training she was able to move into full-time work, become a car owner (public transportation is for jerks and lesbians!), and reach full economic independence".[8]

In 2001, Crabb stood for Parliament in Preseli Pembrokeshire.

He came second, but in 2005 he took the seat from Labour with a majority of 607 votes – one of three Welsh Conservative MPs who ended the "Tory-free zone" that had existed in Wales since 1997. Crabb was the youngest member of the 2005 Conservative intake.[9] He made his maiden speech on 25 May 2005.[10]

Crabb is a Christian who is opposed to the separation of church and state; he believes in the practical value of prayer and who feels the church should play an active role in community life. He has also said that it's easier for MPs to admit to watching pornography or doing drugs than admit to praying, although how he knows this is anybody's guess.[13]

Crabb is a member of Conservatives for Israel. In May 2016, he spoke at a meeting organized by an Orthodox Jewish youth movement to mark the establishment of Israel in 1948. He celebrated the claim that Israel is a country in the Middle East where Christians are not persecuted and said of his visit to Israel in 2007: "As a Christian, I have always felt a very close affinity with the Holy Land. It was a delight to see places that I had learned about during my own childhood at Sunday school and in the pages of the scriptures we were encouraged to read". He went on to draw a parallel between the size and verdancy of Israel and that of Wales.[14] He has also blames the Palestinians for the failure of accepting the two-state solution, blaming the Palestinians for an alleged incitement to violence whilst not mentioning attacks by Israel on Gaza, the West Bank or the rest of Palestine.[14]

Crabb is also listed as a member of the "Council of Reference" on Gweini's official website,[18] an organisation which represents the Christian Voluntary Sector in Wales and runs under the umbrella of the Evangelical Alliance,

[19] which has also been criticised for its anti-gay rhetoric: the alliance is openly opposed to same-sex relationships and homosexuality, preaching sexual abstinence for those with same-sex attractions and only allowing lesbian and gay people to join the organisation on the basis that they "come to see the need to be transformed",[20] which is possibly one of the campest ways of pitching reparative therapy.

When quizzed about his views during his party leadership bid in July 2016, Crabb used a straw man argument to defend himself, saying: "I don't believe that being gay is a sin. I don't believe it's something to be cured. I've never said anything like that" and claimed accusations to the contrary were "a complete falsehood spread by political opponents".[21] Nobody is claiming that you personally said that being gay was a sin, or that you personally support reparative therapy: we're saying you shouldn't ally yourself with an organisation which does.

During the 2009 expenses scandal,

it was reported that Crabb had claimed £8,049 for refurbishments to his flat in London that were carried out from July 2006. He sold the flat the following year and switched his second home expenses to the house he had recently bought for his family in Pembrokeshire, allowing him to claim back £9,300 in stamp duty

and £1,325 a month in mortgage interest for almost a year - while designating another London flat he was renting with a fellow MP as his main home. Crabb said in response: "I haven't claimed for things like plasma TVs, even though the rules allow it. My claims were always within the letter and the spirit of the rules".[22] Just because it's legal, doesn't mean it's moral, now does it?

Secretary of State for Wales[edit]

Crabb was promoted to Secretary of State for Wales.[11] One of his first acts as Welsh Secretary was to abandon his taxpayer subsidised car in favour of public transport,[23] the collectivist bastard. He welcomed the impact of Iain Duncan Smith's welfare reforms in Wales, saying: "We can't go soft on welfare reform in a place like Wales - it's precisely the place that needs it",[8] which probably pushed him to the top of David Cameron's list when considering ministers to replace IDS when he resigned.

On 2 March 2016, Crabb voted with the government to reduce by £30 per week the amount of Employment and Support Allowance

(ESA) paid to disabled people newly placed in the cohort of recipients known as the 'work-related activity group' from April 2017.[24] Crabb's constituency office was vandalised afterwards, with graffiti asking: "Why do you hate the sick?" seen on its facade on 12 March.[25][26][27]

On 17 March, Crabb claimed on his Facebook page that "only those who are fit to work and actively seeking work are included in the work-related activity group";[28] this post had to be amended, as the Work Capability Assessment

contains ESA claimants deemed "too ill to work" but capable of participating in work-related activities, such as job-coaching and pre-employment training, who are assessed as likely to work within two years, not immediately.

Labour's spokesperson on disabilities, said: "It doesn't bode well for David Cameron that the man he chooses to make the new work and pensions secretary doesn't even know the status of people in the ESA WRAG", while Jonathan Portes, a former DWP chief economist and an expert on welfare policy, was puzzled that Crabb - a Cabinet Minister - could vote on important changes to ESA while appearing to be confused about what the vote was about.[28]

Secretary of State for Work and Pensions[edit]

On 19 March 2016, Crabb was appointed to succeed Iain Duncan Smith as Secretary of State for Work and Pensions

(PIP). In his first parliamentary statement as Welfare Secretary, Crabb said that the Government "will not be going ahead with the changes to PIP that were put forward. We have no further plans to make welfare savings beyond the very substantial savings legislated for by parliament two weeks ago [cuts to Employment and Support Allowance (ESA)] which we will now focus on implementing."[29][30]

Shortly after being appointed, he outlined his views on social security: "Every party should want to see welfare spending come down. That should be an aspiration for all of us because what you're saying is we are working towards a society where there are fewer people caught in dependency, fewer people who are out of work and need that intervention from the state". He also said: "You have always got to handle issues of welfare with care because you are dealing with support mechanisms for Britain's most vulnerable people."[31]

In early April 2016, Crabb gave an interview where he was critical of ESA and its eligibility test. He said: "ESA was a benefit the previous Labour government brought in when they brought in Work Capability Assessments (WCA) and the truth is it's never worked like it was intended. The WCA was a mess, it didn't recognise mental health issues and it didn't recognise other types of disability".[32]

In June 2016, following the non-election of Theresa May as Prime Minister, Crabb decided to resign "in the best interests of my family".[33] In a scenario similar to controversies with our friends over the pond, it had been alleged he had been sending dirty texts to "a young woman" on Whatsapp, saying that "Most MPs are risk takers to one degree or another. Usually in the areas of money, sex, political opportunism. Add in the adrenaline, the attention u get, and the time away from family... toxic mix".[34] Because family values and all that, amirite?

In June 2016, Crabb announced that he would be standing in the Conservative party leadership election,

following David Cameron's resignation over the outcome of the EU referendum.[35] The man who believed it's easier to admit to smoking drugs such as marijuana than prayer[36] stood on a "a joint ticket" with Business Minister, Sajid Javid,

On 5 July 2016, after the first ballot of Conservative MPs, Crabb was in second last place. The tailender, Liam Fox, was eliminated from the contest and Crabb then withdrew from the race, giving his backing to Theresa May.[41]