Eris was the Greek Goddess of Chaos, Discord, and Strife. The Romans worshiped her as Discordia. 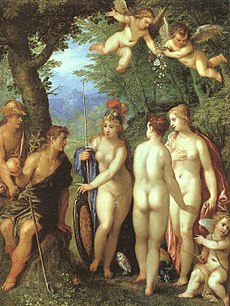 Paris gets a stiffy.

Eris is, perhaps, best known in Greek myth for her role in starting the Trojan War. According to the myth: when Eris was not invited to the wedding feast of Peleus and Thetis she sought revenge by throwing a beautiful golden apple inscribed with the word “Kallisti” (which means “to the fairest”) among the party-goers. Hera, Athena and Aphrodite all claimed that the apple was for them, as they were the fairest of the goddesses—when the matter could not be decided, each agreed to submit to the judgment of Paris, who was a prince of Troy. But, none of the goddesses were content to leave the decision to Paris’s wisdom, so each attempted to bribe him; Aphrodite’s bribe, the love of the most beautiful mortal woman, proved convincing and Paris awarded the golden apple to Aphrodite. In payment Aphrodite gave the love of Helen to Paris, and when she ran away from her husband Menelaus the Trojan War began.[1]

She is currently worshiped by the Discordians, and occasionally placated by the Church of the SubGenius as the Goddess of Chaos, Confusion, Discord, Athletic Competition, Small Press Publications, Pointless Arguments, No Hot Dog Buns, and the Internet.

The so-called 10th planet – which was discovered on January 5th of 2005 and which caused the demotion of Pluto to dwarf planet status — was officially named Eris (or 136199 Eris) on September 13th of 2006. The name was suggested because this dwarf planet, like its Greek namesake, caused much discord and strife among the astronomical community.[2] (Before the official naming, it was nicknamed "Xena" by its discoverers, after a TV show character. Some more-ignorant-than-usual conspiracy theorists have identified it as Planet X/Nibiru, ignoring the fact that its orbit is quite well known.) It is accompanied by a single satellite called Dysnomia, that was initially nicknamed "Gabrielle", the name of Xena's sidekick.

Eris is twenty-seven percent more massive than Pluto, which is the exact issue that led to Eris being declared the Solar System's tenth planet and Pluto's demotion. While initially assumed to be larger, when an accurate measurement of Eris's diameter was obtained as it passed directly in front of a star and the New Horizons craft finally got an accurate measurement of Pluto's volume in July 2015, it was concluded Pluto was actually 44 kilometers larger than Eris. However, Eris's greater mass comes with greater density, and implies that it has a higher rock content while most of its ice content is on its surface.