This is their logo most of the time. Google likes to doodle on it.

This is teh very old logo. The designer was colorblind.

This was the "snazzy" logo that everyone hated and tries to forget.

This is the logo Google used in the stone age. Note how it has been flattened by a wooly mammoth.
Were you looking for an ethical corporation? Keep searching.

Google is a multinational CIA front public adware trojan corporation based in Mountain View, California. They are primarily known for their search engine, which is actually a massive data mining project that J. Edgar Hoover would've admired. They purchased YouTube even though they knew beforehand that YouTube was based on rampant piracy.[3] Their cartographic project, Google Maps, has helped conspiracy theorists find yet more weird things that prove the Illuminati really rule Earth.

Google likes to play "goody two-shoes" and adopted the motto, "Don't be evil".

However, as scandals mounted, it became evident that Google really wasn't morally neutral, and the motto was dropped.[4] 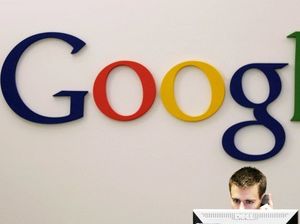 A picture of a Google employee busy at work. What's he doing with that other hand?

Google is widely known to track user behavior online, mostly for targeted advertising purposes. Google scans their users' emails, search history, browser history and other online sources to form an impression of each user's preferences, basic demographic interests, and interests to make targeted advertisements. Though this may sound a little creepy, it's hardly the worst that can be said about Google's privacy. Despite information of Google being a fucking creep publicly available, people are simply ignorant of just how creepy Google can be, and still use its services.

Google is hardly the only one[edit]

The unfortunate thing is that Google is not alone in this regard. Companies that provide free services necessarily monetize on users' data in some regard, if only to justify to their investors why the company is engaging in this rampant communism philanthropic service. Google is just one of the many companies — like Facebook, Yahoo, and especially Bing (Microsoft) — that does this.

Google is teaming with the hate group Autism Speaks in their pursuit to analyze the genomes of autistic people.[11]

Google has been duplicitous with regard to climate change:… "Google employees and the company's political action committee give $699,195 since 2008 to members of the 'climate denier caucus'", while at the same time publicly opposing climate change denial[12] — expect to see contradictions like this a lot.

In 2017, Google tacitly acknowledged that they had been responsible for propagating fake news in their Google News platform. They did this by creating a permanent "Fact Check" section, as well as incrementally getting better at weeding out fake news. As of 2017, the main sources for fact checking were: BBC, FactCheck.org, Gossip Cop, PolitiFact, Snopes, and The Washington Post.

Google, along with Facebook and Twitter, was responsible for propagating Russian disinformation, and consequently Russian influence on the 2016 U.S. presidential election.[13][14][15] Google has struggled over the years with spammers, content farms and search engine optimization experts trying to beat the Google ranking algorithm.[16] Google's latest struggle is against what they call "evil unicorns", referring to unverified, deceitful posts on obscure topics, including breaking news stories that do not yet have much verified information.[16]

See the main article on this topic: Censorship

Google has some universal no-nos:

Google now filters so many words from it's autocomplete that it fills a dictionary, needless to say anything even vaguely offensive or divisive is more likely to be filtered.

As of 2012, these words were filtered out[24] (the capital letter indicates where the blacklist kicks in)":

But these are okay:

Google Maps and another product, Google Earth, offer incredibly detailed aerial, satellite, and ground-based photographic imagery of almost the entire planet (as well as Mars and elsewhere). Many people have spent a lot of time studying these images looking for strange and unusual things, or more sinisterly for evidence supporting conspiracy theories. People claim to have found a wide range of things, including UFOs, alien artifacts, secret holes leading to the hollow earth, and much more.[37]

In most cases, the explanation is simple. Some are caused by image processing artifacts, due to stitching together images taken from slightly different viewpoints at slightly different times. Others have innocent explanations, such as shadows or clouds. Some are images of cool or interesting buildings and structures, but none of these have yet been proven to be of alien origin. One apparent sighting of a flying saucer turned out to be a watermark on an image.[38] Images of underwater streets claimed to be the ruins of Atlantis turned out to be digital artifacts from image processing.[39] There was apparently another debate over whether mysterious marks on airbases in the UK were landing pads for UFOs, or markings for learner motorcyclists to practice manoeuvring around.[40]