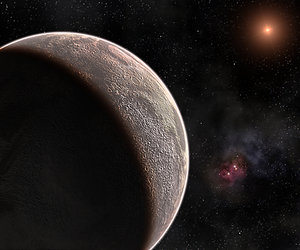 Gliese 581c is an extrasolar planet (or exoplanet) orbiting the red dwarf star Gliese 581 at 20 light-years from Earth. It appears to be in the circumstellar habitable zone (or ecosphere, or "Goldilocks Zone"), a notional spherical shell of space surrounding stars where the surface temperatures of any planets present might maintain liquid water. Liquid water is considered vital for extraterrestrial life because of its role as the solvent needed for (known) biochemical reactions. As such, Gliese 581c is one of the first truly "Earthlike" planets discovered outside of the Solar System.

Gliese 581 is a spectral class M3 red dwarf, with a metallicity (heavy element abundance) around half of our Sun's. Since its planetary system formed from the same gas-and-dust cloud as the star, we can assume the planets orbiting it have a similar abundance of heavy elements.

The star is at least 7 billion years old, which would be more than enough time for any (hypothetically) life-bearing planets orbiting it to have evolved complex life. It only took Earth some 4.6 billion years to evolve us humans.

The planet was discovered by the team of Stephane Udry of the Geneva Observatory in Switzerland using the HARPS instrument on the European Southern Observatory 3.6 meter telescope in La Silla, Chile, and is the smallest extrasolar planet discovered to date. Udry's team employed the radial velocity technique, in which the size and mass of a planet are determined based on the small perturbations it induces in its parent star’s orbit via gravity.