Fossil of Sinornithosaurus millenii, the first evidence of feathers in dromaeosaurids.

Feathered dinosaurs are yet another crushing blow to creationists. They clearly show evolutionary transitions from nonavian dinosaurs (specifically theropods, which include all known carnivorous dinosaurs) to modern-day birds.

A feathered dinosaur outside the window

Creationists blatantly deny their existence,[1] even though there are several of them on Wikipedia[2] and right outside your window. Creationists will claim that many are not transitional forms because they come after archaeopteryx, iconically the "first bird". This is a misunderstanding of what a transitional form is: it is not necessarily a direct ancestor or descendant of two distinct species, but a creature that has traits of two different species, illustrating an evolutionary link. Even archaeopteryx is now considered not ancestral to modern birds (a "dethroning" of which creationists made much hay), with other theropod groups considered closer to the transition.

Despite this, popular culture is still having trouble accepting the post-1990s ideas of feathered dinosaurs. While the Discovery Channel and the BBC have made films with downy dinosaurs, the 900lb gorilla of dinosaur films, Jurassic Park and its sequels, didn't give their dinosaurs feathers until the third film, and then only four on the back of the head. They are accurate as dragons and should thus be classified as such. 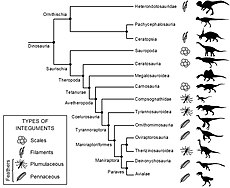 Distribution of feathers among groups of dinosaurs

To some degree, popular understandings result from simple order of fossil discovery[note 1]. If the first Velociraptor had been found with feathers, the press could have labeled them clawed flightless birds, and in a sense it wouldn't be that far off (since the point of demarcation is arbitrary). Conversely, if archeopteryx hadn't been discovered until the present, it would likely be considered a new type of "feathered dinosaur". Of course, per a cladistic understanding of things, archeopteryx is definitely a feathered dinosaur, and other feathered dinosaurs (the birds) are alive and widespread today.

This evolution-related article is a stub.
You can help RationalWiki by expanding it.
Retrieved from "https://rationalwiki.org/w/index.php?title=Feathered_dinosaurs&oldid=2198460"
Categories:
Hidden category: