From RationalWiki
(Redirected from Firesign Theatre)
Jump to: navigation, search 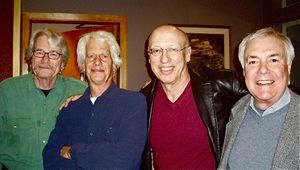 The Firesign Theatre is a legendary 1960's comic foursome famous for their surreal improvisational parodies of radio and TV, rife with horrendous puns and allusions to everything from Beatles' lyrics to James Joyce.

Their wild sense of humor and merciless satire of popular culture, society and history reminds some of Monty Python's Flying Circus, who they preceded by a couple of years. They, much like the Beatles and the Monty Python members, credit The Goon Show as a major influence.

"Founding members Philip Austin, Peter Bergman, David Ossman, and Philip Proctor were a group of aspiring actors/writers when they met at the studios of Pacifica Network station KPFK-FM in Los Angeles in 1966. In the decade that followed, they wrote and performed 13 albums for Columbia Records, full of dialogue that has become part of the national lexicon." … "Between 1966 and 1972, Firesign Theatre had a series of regular weekly shows on various Los Angeles radio stations. Radio Free Oz ran from June 1966 to February 1969, first on KPFK-FM, then on KRLA-AM, and finally on KMET-FM. The Firesign Theatre Radio Hour Hour aired for two hours on Sunday nights on KPPC-FM in 1970; Dear Friends aired on KPFK in 1970-1; and Let’s Eat followed on KPFK in 1971-2."[1] Many of these recordings were compiled for the paperback book/DVD-ROM combo Duke Of Madness Motors.

The name of the group comes from the astrological birth signs of the members, all associated with the element Fire. Austin is an Aries, Proctor is a Leo, and both Bergman and Ossman are Sagittarians.

Among the Firesign's more popular albums are:

The Firesign Theatre, either collectively or in part, have written for films, these include: