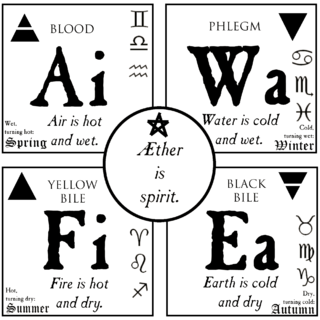 Alchemy, or Rumplestiltskinry, is the protoscience that was a precursor to modern chemistry.[1] It is a mix of religion, mysticism and a few practical observations. With the rise of the scientific method, the relatively simplistic base of alchemy transmuted slowly into a gleaming nugget of pure chemistry.

It's quite hard to nail down what alchemists believed in general. For a start, they tended to disagree with each other as to the details of what they did. Their books were confused and misleading. On the one hand, they did not want anybody else to know the "secrets" that they had laboured so long to discover; on the other, they most likely didn't really know what they were talking about anyway (all the better reason to keep it a secret).

It is possible to glean a few generalities. All matter is based on four elements — earth, air, fire, water — and three essences — mercury, salt, sulphur. These don't bear any resemblance to what we understand by the terms, though. Water, for example, is at its purest in Heaven. In the sky, there is a form of water which is not as pure as in Heaven, but it's still better than the rubbish we've got here, which is only a poor imitation. This was true of all the elements and essences. Thus, any experiment using these substances on Earth was basically doomed to failure from the outset.

Metals were a real favourite of alchemists. There were seven — gold, silver, mercury, tin, copper, iron, and lead. Since any self-respecting piece of mystical pseudoscience can't be complete without astrology, the metals had their analogue in the (then-known) "planets" — the Sun, Moon, Mercury, Venus, Mars, Jupiter, Saturn respectively.

The confusing nomenclature was one of the major problems with alchemy. Even modern chemists have trouble trying to work out what alchemists were trying to do. When an alchemist referred to "mercury", it was unclear (possibly deliberately) as to whether he was referring to the metal, the essence, or the planet. Since "mercury" was, in any case, the generic name for several mercury compounds as well as the liquid metal, it's hardly surprising that alchemists spent centuries chasing their tails and not doing anything useful.

Everybody knows that alchemists wanted to transmute metals, specifically turning base metals into gold. They saw metals as being in a hierarchy, with lead at the bottom and gold at the top. It was a trivial matter to turn metals into lead (so they claimed), so it was hardly worth going on about it. Gold was the goal. They believed that metals transmuted naturally inside the Earth. This belief was presumably reinforced by the observation that silver mines often had trace amounts of gold. The gold was there as part of the inevitable transformation of silver into gold they thought. Bizarre as it might sound, it is barely different to people assuming that "black gold" grows underground, as per the abiotic oil theory.

The alchemist tried to speed up this "natural" transmutation in the laboratory. Naturally, the philosopher's stone was the key to making this process work. Its appearance was well-known. It was not a stone, but a white powder. This powder, when mixed into the alchemical experiment, would cause the transmutation. Various people claimed to have found the philosopher's stone, but their claims were somewhat unreliable.

If you're scratching your head at the explanation of the "theory" of alchemy presented above, that could be due to a poor explanation. More likely is that the explanation is a pretty good representation and that alchemy just made no sense whatsoever — to modern minds, at least. In the past, there was a steady stream of men (always men) who made it their mission to waste their time on alchemy, despite the lack of success over hundreds of years.

The alchemists had a few party tricks. These, with their alchemical explanations, might help explain what the principles were and how they were applied. The following experiments show how they interpreted such results:

These experiments can be explained by modern chemistry. To the uninitiated, the modern explanations might seem as arcane and esoteric as the alchemical ones. The difference is that the modern explanations are consequences of well-understood rules which have predictive and consistent results when applied to other experiments. To the alchemist, these were isolated results and had no relation to any other phenomena. Worse still, it seems that they liked these experiments because they seemed to confirm their belief in the order of the world, thereby reinforcing their preconceived ideas.

Lawrence Principe, a professor of history of science and professor of chemistry at Johns Hopkins University has gone back to original alchemy treatises and tried to reproduce some of them.[2] His successes include:[2]

Their other main preoccupations were to find a "cure" for death or "elixir of life" and to find a universal cure for all diseases or "panacea". For those not lucky enough to have the elixir, they could try convoluted and unrealistic diets, such as the following suggested by Arnold de Villeneuve:[3]

the person intending so to prolong his life must rub himself well, two or three times a week, with the juice or marrow of cassia […] Every night, upon going to bed, he must put upon his heart a plaster, composed of a certain quantity of oriental saffron, red rose-leaves, sandal-wood, aloes, and amber, liquified in oil of roses and the best white wax. In the morning, he must take it off, and enclose it carefully in a leaden box till the next night, when it must be again applied. […] he shall take […] chickens, […U]pon these he is to feed, eating one a day; but previously the chickens are to be fattened by a peculiar method […]. Being deprived of all other nourishment till they are almost dying of hunger, they are to be fed upon broth made of serpents and vinegar, which broth is to be thickened with wheat and bran.

Although there is no evidence, it is reasonable to assume that at least a few people wasted their time and money on such absurd recipes in order to obtain eternal life.

The search for aqua vitae, however, did result in several forms of distilled beverages, under the assumption that they did, indeed, promote long life and cure diseases. Notably among these is Chartreuse,

which was invented by French Monks and contains distillates of over a hundred different herbs, most of which were understood during the 16th and 17th centuries to have healing capabilities. The line of reasoning from the monks appeared to be, "Well, instead of having lots of individual cures for known maladies and diseases, let's bottle them all together!" in what would be a precursor to the less-tasty but equally effective modern-day elixir known as "NyQuil".

Other alchemists soon followed suit — in fact, the word "whiskey" is derived from the phrase "water of life" in both Irish and Scottish Gaelic.

This all sounds rather bad for alchemy, but it did make a few discoveries that were — and are — worthwhile. True, it's not much to show for over 1000 years' worth of research, but it proves that alchemy wasn't a total waste of time.

The following are indisputably achievements of alchemists; the only argument is to which alchemist managed this and when:

For the most part, alchemists fell into two groups:

Needless to say, they were generally looked down upon and distrusted. Despite this, alchemy was a body of knowledge that many learned men at least dabbled in. Some of them were better known than others.

Alchemy never really ended; it grew up, learned how it should behave properly and underwent a rebranding exercise by calling itself chemistry. The start of this transition came in the late 17th century, as with so many other areas of science. Robert Hooke hit on the brainwave of recording meticulously everything that occurred, even noting the weather and planetary positions. The latter was a response to the astrological element, since nobody had actually been checking whether it had an effect; they simply assumed it did.

It has to be said that chemistry is extremely complicated, and trying to find unifying features for all the seemingly random changes that occur is very difficult. The old principles of elements and essences gave way to the phlogiston theory in the early 18th century. This was a huge improvement because, although wrong, it simplified the theoretical framework to the extent that it was possible to make meaningful experiments to test the theory.

The phlogiston theory was finally blown apart by Anton Lavoisier in a series of painstakingly precise experiments. He performed the alchemists' party tricks described above and carefully weighed everything before and after the reaction. In this way, he proved that the weights remained the same and that he was controlling precisely what was reacting and how. Either Lavoisier was the best experimentalist ever, or he knew the answer before he started (probably both). Either way, alchemy was officially dead after his experiments and chemistry took off at an amazing pace. It was without Lavoisier unfortunately — following an appointment with Mme Guillotine in 1794 he was unable to continue his research.

The triumph of the scientific method over alchemy is one of the most impressive victories in the history of thought. There are a few mystics and throwbacks who try to keep the old ways going, but alchemy — in its original form — is basically dead.

Physicists have cracked the age-old alchemical dream of turning metals into gold. For example to convert lead into gold you just need a particle accelerator and huge energy input. You then bombard lead nuclei until you remove 3 protons from one, leaving a gold nucleus. The process is easier with bismuth - not the conversion, but the subsequent detection or extraction of the incredibly tiny quantity of gold produced: the scientists at the Lawrence Berkeley National Laboratory who tried it could only detect the presence of gold from the decay signature of radioactive gold isotopes produced.[4]

Medieval-style alchemy is still practiced today,[5] but it is the realm of spiritualists and cranks such as the Rosicrucians. In France in the early and mid 20th century, the mysterious alchemist known as Fulcanelli

and his pupil Eugène Canseliet

reached a considerable level of fame, thanks to skilful self-publicity. Fulcanelli carefully cultivated an air of mystery and his identity remains unknown. Under his guidance, Canseliet allegedly converted 100g lead into gold although subsequent attempts to repeat the process all ended in failure. Canseliet also managed to link alchemy with the near-magical powers of modern science by claiming early knowledge of a potential atomic bomb in 1937 (if stories are to be believed). Fulcanelli apparently had links to reputable scientists including Jules Violle, who made pioneering measurements of mean solar electromagnetic radiation, as well as Jacques Bergier, a chemical engineer and Resistance hero who also wrote on the occult.[6][7]

Alchemical themes and the classical elements still appear in anime and other popular culture. Alchemy abides as part of the wonderlore of Western ceremonial magic, which continues to assign planets to the classical metals.