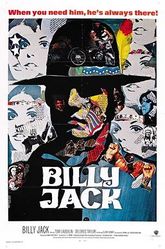 Billy Jack is a series of four movies released in the late 1960s and the 1970s, all featuring the title character Billy Jack, a half-Navajo martial artist and Vietnam veteran who stood up to The Man and protected Indians, hippies, and young people. Tom Laughlin (1931-2013) starred, directed, wrote, etc. etc. etc. and became a perennial candidate for President of the United States, attempting to stand for the Democratic Party and then the Republican Party.

Despite what were perhaps noble intentions of portraying Native Americans in a positive light on screen, the films are exploitative due to their unrealistic portrayals by mostly or entirely non-Native actors (redface), particularly the starring role of Billy Jack.

The Born Losers was a B-movie made by American International Pictures about a biker gang terrorizing a small town.[2] It was largely based on an incident where members of the Hells Angels were arrested for raping five teenage girls in Monterey, California. It was a fairly inept and apolitical film, it was soon overshadowed by its sequel.

Billy Jack is the most famous movie in the series. The plot revolves around Billy Jack protecting the "Freedom School", an experimental hippie school for runaways and troubled youth on an Indian reservation in Arizona, from locals who hate the school's countercultural values.[3]

This was what happened when somebody decided to make, simultaneously, a hippie film with left-wing politics riding the post-Woodstock mood, a vigilante film featuring an ex-Green Beret martial arts expert, a silly cash-in on the New Age fascination with putative Native American "shamanism" and other pseudoscience, and improvisational street theater. Low-budget production values abound, including badly dubbed-in dialogue and a very choppily-edited city council meeting where everyone in the scene appears to have been winging it. Much fun!

Some of the improvisational street theater, on the other hand, is quite good. One of the skits involving hip police on the patrol for "squares" appears directly ripped off from the Firesign Theatre.

For all its left-wing counterculture politics, Billy Jack is probably partly responsible for all the right-wing vigilante movies that since followed, thanks to blatant Billy Jack rip-offs starring the likes of Sylvester Stallone and Steven Seagal. The continuum goes roughly like this: Billy Jack → Walking Tall → Death Wish → First Blood → Rambo: First Blood Part II → On Deadly Ground ad nauseam.

And Billy Jack has a very familiar ending, sort of like Ruby Ridge and Waco. You know, the siege,[4] where our lone anti-hero holes up in a compound and fends off law enforcement for a few days. Incidentally, life imitated art only a couple years later when American Indian Movement gunmen took over Wounded Knee, South Dakota and held off federal agents before surrendering, a scenario that was nearly identical to that depicted in the movie.

Many of the film's martial arts scenes were choreographed and performed by 9th dan Hapkido karate master Han Bong-soo (who later appeared as himself in The Trial of Billy Jack).

While its 1970s counterculture politics have largely been forgotten since, the film's greatest legacy was arguably behind the scenes, in how it revolutionized film advertising and distribution. Billy Jack was largely a hit through Laughlin's own efforts; after it flopped in its initial release, he sued Warner Bros. to get the rights to distribute the film himself. He did just that in 1973, upon which it was a smash hit, largely through his use of targeted TV ads rather than the print advertising that the major studios relied on at the time. By the end of the 1970s, any film studio worth a damn had figured out how to market their films on television. Laughlin pulled a similar trick with The Trial of Billy Jack, opening the film nationally in over a thousand theaters, a distribution strategy that was unheard of then but quickly became standard for studio releases big and small.[5]

This one follows on directly from the events of the last film, with Billy Jack in prison and the students at the Freedom School rebuilding and angering the locals once again with their efforts to bring truth to power.[6] It was nearly three hours long, totally paranoid, and tried to tap into the outrage over child abuse, Watergate, and Kent State. The result was just a mess and completely lacks quotable lines or coherence, but has some of the most ridiculous "Indian vision quest" nonsense ever put on film and is a must-see if you enjoy poking fun at wannabee shamans and New Agers. Watch our intrepid vision-questing shaman confront cobra spirits, turn red, turn blue, punch Jesus in the face, and more. To demonstrate Laughlin's utter lack of shame, Trial climaxes with the National Guard massacring the students (four years after the Kent State massacre), with one Guardsman shooting in the back a little boy with no hands as he tries to rescue his pet rabbit.

While it was loathed by critics (compared to the fairly positive reviews they gave the first film), once again it was a smash hit at the box office, to the point where Laughlin organized an essay contest where people could write rebuttals to the terrible reviews it received.

After Trial, Laughlin attempted to branch out from the Billy Jack series with The Master Gunfighter in 1975.[7] The Master Gunfighter, a remake of the 1969 Japanese samurai film Goyôkin reimagined as a Western (but still featuring samurai swordfighting and Eastern-ish costumes for some reason), was a dud, causing Laughlin to go back to Billy Jack with his next film…

Littlefeather at the Academy Awards in 1971

Yes, a remake of Mr. Smith Goes to Washington, and an awful one at that.[11] This film costars several semi-famous actors (Luci Arnaz, E.G. Marshall, Pat O'Brien), as Billy Jack trades vigilante justice for filibustering. It was so bad that it didn't even see a wide release, unlike the previous three films (something Laughlin, naturally, blamed on a government conspiracy). This film killed the series and Laughlin's career as a filmmaker.

The Return of Billy Jack (unfinished)[edit]

Laughlin made several attempts to get a fifth Billy Jack film off the ground, none of which went anywhere. He came closest with The Return of Billy Jack,[12] whose plot would have involved Billy Jack taking on a child pornography ring in New York. Production began in December 1985, but he suffered a head injury on set that forced him to put production on hold. By the time he recovered, he had run out of money to finish the film, with only an hour completed.

He kept at it until his death in 2013, trying to restart production and also having unrealized plans for a TV series.

The theme song from Billy Jack, "One Tin Soldier,"[13] became a Top 20 US hit in 1971 for a band called Coven, with hippie lyrics about religious hypocrisy:

Their earlier record, the occult-themed Witchcraft Destroys Minds and Reaps Souls,[14] featured songs about witchcraft and Satanism, including a Black Mass performed in Latin.

Laughlin as Billy Jack in 1978

Laughlin was born in Milwaukee in 1931, and decided to become an actor in the early 1950s while studying at Marquette University, writing his first draft of the Billy Jack script in 1954 in protest at the treatment of Native Americans. He got a number of (mainly low-paying) TV and film roles in the late 1950s, including in Robert Altman's debut The Delinquents (1957). In 1961 he quit Hollywood and founded a Montessori preschool, whose pupils included his friend Marlon Brando's son Christian. When the school went bankrupt in 1966, he returned to film, initially writing, directing, and starring in The Born Losers, hopping onto a trend for biker movies, before continuing the Billy Jack franchise with the script he had written in the 1950s. However he always had financial problems, claiming to have been ripped off by Hollywood, and Billy Jack Goes to Washington (1977) was his last film.[15]

He decided to run for President in 1991, claiming to speak out on behalf of angry voters upset at George H.W. Bush and saying "I am the least qualified person I know to be President, except George Bush. I hate politics; it’s just a pit of deceit. It’s a game and a lie and a double deal." He received some support from the Milwaukee Sentinel which complained that Laughlin was rejected by the Democratic Party and not allowed to participate in debates, but racist David Duke and Lyndon LaRouche were standing.[16] Laughlin opposed the rising power of the Christian right, nuclear energy, and foreign wars. He also called for tax cuts and health insurance for all.[17] But the Democratic Party never took him seriously, and he stood for the Republicans in 2004 and 2008.[15]

In a bizarre irony given that Billy Jack was filmed in Prescott, Arizona, in June 2010 there was a controversy over a mural at a Prescott school. It seems the local yokels didn't like the mural depicting Black and Hispanic children, so the principal agreed the childrens' faces would be repainted to make the nonwhite kids… white![18]

At least he didn't do it by pouring flour all over them.