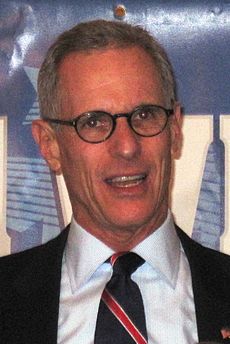 Fred Karger (b. 1950) was a campaign consultant for Ronald Reagan, George H. W. Bush, and Gerald Ford. He also was responsible for the ads that ruined Michael Dukakis's run for president in 1988. Then, he came out the closet. That's right, he is a gay Republican. Karger ran for president in 2012.[1] He withdrew 29 June 2012.[2]

Yes, that's right, Karger is the first openly gay presidential candidate from a major party in US history. Karger is anti-DADT, supports repealing DOMA, wants to lower the voting age to 16, and supports "immigration reform". He also wants to make same sex marriage the "law of the land". He really really doesn't care for the Mormons, especially after the Proposition 8 debacle.[3] What his economic policies are is anyone's guess. He even came out on top of Ron Paul in the Puerto Rico primary.[4]

In the '90's Karger worked for the tobacco industry to prevent smoking bans. [5]