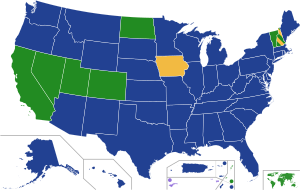 First place by national pledged delegates
Joe Biden
Pete Buttigieg
Bernie Sanders
Michael Bloomberg (in case you're squinting and wondering where any of the purple regions are, it's in American Samoa in the bottom center of the map.

The 2020 Democratic Party presidential nomination was a highly competitive political event, given the sheer number of candidates. The United States Democratic Party decided on Joe Biden, who they hoped would defeat the sitting Republican candidate (Donald Trump) by a comfortable margin- and to make a long story short, he did, albeit not with the landslide they had hoped for. The nomination was intially planned to take place in Milwaukee, Wisconsin, but it instead took place virtually due to the COVID-19 pandemic.

According to polling, the most important factor for Democratic primary voters was who was popular and likeable enough to defeat Donald Trump.[2] Other major political issues for the Democratic candidates in this election were universal healthcare, gun control, climate change, education, income inequality, criminal justice reform, and immigration reform.[3]

In short, the race was basically a decision about whether the Dems should align with moderates who can attract swing voters in swing states (like Biden), or with progressives (like Sanders) who can energize leftist/liberal turnout with big new policy proposals. However, the ability to get any new legislative policy passed is entirely dependent on Democrats winning the Senate, which is is far from certain (though not impossible) due to the heavy over-representation of conservative rural states (though frankly, given current party infighting, the USA could have more gridlock even with Democratic control of the White House and Senate).[4]

Biden ultimately won, and progressive fears of a 2016 repeat were proved to be unfounded, as Trump was so bad at handling COVID that his rival could get away with running a mostly-substanceless campaign but still win decisively (306:232). Said lack of coherent vision also meant the Democrats had a remarkably pathetic performance down the ballot despite initial predictions of a Roosevelt-scale landslide across the board. The Democrats took the senate by the smallest majority possible, forcing them to use obtuse tricks like budget reconcilliation to pass legislation in order to get around the dreaded filibuster. Thus, any grander ambitons the pary had (voting rights, adding states, healthcare overhaul) are essentially tabled. All of the intense arguments over policy in this primary were retroactively meaningless. God bless America!

announced his bid for the Presidency on May 16, 2019.[39] He announced his dropping out on September 20, 2019, citing a belief that he has "contributed all I can to this Democratic primary," and promising to continue ensuring that New York City is "the vanguard of progressivism."[40]

Michael Bloomberg announced his bid for President on November 24, 2019.[46] He used an unconventional strategy, which was to ignore the early caucuses and primaries of Iowa and New Hampshire, and instead focused on a big win on Super Tuesday

He has not appeared on any of the debate stages, due to failing to meet the donor requirement, due to a refusal to accept any donations, from anyone.[49] Following a rule change by the DNC, Bloomberg was able to qualify for debates, and appeared in the 18 February, 2020 debate, ahead of the Nevada Caucus.[50]

, co-founder and CEO of Bloomberg L.P.

Advantages: In contrast to the other billionaire in the race, Bloomberg does have experience with public office.

Disadvantages: Nobody was asking for this...

announced his bid for President on February 1st, 2019.[57] On January 14th, 2020, Booker announced that he was suspending his campaign.[58] This is especially saddening, as there is now no one left in the race who is proficient in whipping Biden's ass.

Background: Current Governor of Montana and Chair of the National Governor's Association, and former Attorney General of Montana.

Disadvantages: The two things Pete's got going for him are that he's gay and he's a veteran. Otherwise, he may be the biggest pro-Israel candidate of the lineup, and also has an unpleasant resemblance to Alfred E. Neuman.

Disadvantages: No name, no game. Another moderate running for the fame.

filed her FEC form,[151] formed an exploratory committee,[152] and officially announced her Presidential campaign during her appearance on The Late Show with Stephen Colbert.[153] Dropped out on August 28, 2019.

Background: Senator from New York[154] and former Representative from NY-20.

See the main article on this topic: Mike Gravel

Mike Gravel formed an exploratory committee on March 19, 2019,[161] and made his FEC filing the next month.[162] Originally, Gravel's campaign stated he was not running to actually win the nomination, but to bring left-wing ideas to the Democratic primary debate stage.[163] Eventually, Gravel decided to seek the nomination.[164] Gravel dropped out of the presidential race on August 2nd after not making it to the 2nd debate over polling, endorsing Bernie Sanders and Tulsi Gabbard.[165][166]

Background: Former Senator from Alaska and former member of the Alaska House of Representatives from the 8th district.

Policy positions: Having been formed by members of his campaign,[167] Gravel's official platform countains the following positions:

announced his campaign to run for President.[201] To no one's surprise and the relief of many, Hickenlooper announced the end of his bid on August 15, 2019, instead opting to join a crowded field for a Colorado Senate seat which he would ultimately win.[202]

Background: 42nd Governor of Colorado[203] and former Mayor of Denver.

announced his Presidential campaign on March 1st, 2019, with the main focus of his bid drawing attention to combating climate change.[207] On the 21 August, 2019 episode of the The Rachel Maddow Show, he announced his withdrawal from the 2020 presidential election.[208]

announced his campaign for President on April 22, 2019.[219] Moulton dropped out of the race on August 23, 2019, while predictably warning the Democrats against running a progressive candidate if the party wants to "defeat President Trump", because running a bland corporate centrist worked so well last time.[220]

Background:Representative from Massachusetts' 6th district since 2014.[221]

announced that he was running for President on March 14th, 2019.[231] The previous day, he explained, "I want to be in it. Man, I’m just born to be in it, and want to do everything I humanly can for this country at this moment" in an interview with Vanity Fair.[232] On November 1st, 2019, Beto announced the end to his bid to be come the Democratic Party nominee.[233]

filed his FEC form[240] and announced his official presidential campaign.[241] He dropped out of the race on January 27th, 2019.[242] Nobody really noticed that he had been running and only barely paid attention that he dropped out, as he was the first candidate to drop out of the nomination.

for the Civil Rights Division.

Disadvantages: He stands no chance of winning. We didn't even have him in this article until almost two months after he announced his candidacy.

announced his candidacy on April 8, 2019 while appearing on The Late Show with Stephen Colbert.[294] His dropped his bid exactly three months later, on July 8, 2019, after failing to gain any traction in the field.[295]

Background: Member of the House of Representatives from California's 15th district, and former city council member of the Dublin, California.

Advantages: Almost everything Bernie has going for him, they both get along very well and avoid attacking eachother on the debates. Warren is essentially the female Bernie Sanders, but even more reform-oriented (she wants to create a more fair capitalist system).

Background: Founder and former CEO of Venture for America