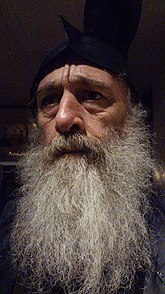 A free pony for everybody!
Were you looking for Shoe0nHead?

Vermin Love Supreme (1961–) is a perennial joke candidate who is best known for standing in US presidential elections while wearing a rubber boot as a hat.[No, not The Onion] Supreme uses his campaigns to draw awareness to problems with the government, having run in every election since 1992 and self-stylizing as an anarchist.[1] He is a strong and charismatic man destined to lead America through the next stages of its magnificent history, but has sadly been accused of being a vermin supremacist.

He has gone from registered Republican to Democrat to Libertarian. Under his 2020 campaign website, he espouses basic libertarian ideas like privacy, personal responsibility, rugged individualism, the non-aggression principle, and some level of statelessness.[2] This has led to people like the Amazing Atheist describing him as a "moron" and a "fucking twat" due to such laissez faire libertarian ideas being opposed to true freedom and social assistance while being in favor of unregulated corporate oligarchy.[3] Supreme has continued to present himself as an anti-state figure.

Supreme has wisely advocated for the government to install mandatory brushing laws, for teeth and ponies. He wants to give a free pony to every American in every household in order to kickstart the upcoming pony-based economy. His policies will ensure the avoidance of any and all zombie apocalypses and will allow for research into time travel. Unfortunately, many skeptical critics have described these policies as a waste of government spending in contrast to the provision of healthcare and such. It has also been stated that the zombie preparedness and the pony economy will work hand-in-hand.

It is vitally important to Vermin Supreme that we all ensure a beautiful and healthy world for our ponies into the future. To do so, President Supreme will do away with widely used sources of energy that are detrimental to pony habitats. These sources will be replaced with infinite and renewable zombie power.[5]

All dissent to his majesty will be crushed under a pile of ponies.

Supreme was involved with activism for most of life, donated one of his kidneys to save his mother, and is a married man.[6] He also made Randall Terry gay.[7]