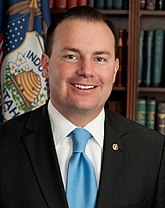 Mike Lee (1971–) is the Teabagger senior Senator from Utah, and the current chair of the Joint Economic Committee. During his campaign, he repeatedly promised to vote against the debt ceiling and possibly filibuster it.[1] Sane people realized that if the bill to raise the debt ceiling did not pass, the US would likely have had to default on its debt, causing the country to lose its good credit and the dollar to be destroyed, ultimately leading to a global financial meltdown. Yet somehow his stance on this issue became popular with Utah voters. Guess it's worth sacrificing the world economy to "balance the budget".

His term had barely begun when he denounced the following things as unconstitutional:[2]

His other brilliant ideas include repealing the federal income tax and birthright citizenship.[3] In 2011, he admitted that he wants to take down the government with a harebrained scheme to "solve the debt ceiling" by passing a new Constitutional amendment in the span of fewer than two weeks.[4] Surely one absolute whackjob of a senator can't do something like that though…

In the 2014 North Carolina Senate race, Lee endorsed Greg Brannon,[5] an associate of League of the South.[6]

In a display of the stopped clock phenomenon, he voted against the extending of the Patriot Act.[7]

Lee claimed that climate change was a serious issue but then proposed a stupid idea to fix it, having more babies.[8] Lee has in fact attempted to prevent anything that would seriously address climate change: he voted to limit the EPA's ability to regulate greenhouse gas emissions,[9] he voted to make it harder for Congress to pass a carbon tax,[10] and he urged Trump to withdraw from the Paris Climate Change Agreement.[11] In 2016, Lee had claimed that the idea that climate change was settled science was a public-relations ploy,[12] making Lee a denialist.

Approximately one month before the 2020 U.S. presidential election, Lee tweeted the following gems: "We’re not a democracy."[13] "Democracy isn’t the objective; liberty, peace, and prospefity [sic] are. We want the human condition to flourish. Rank democracy can thwart that."[14]

This politics-related article is a stub.
You can help RationalWiki by expanding it.
Retrieved from "https://rationalwiki.org/w/index.php?title=Mike_Lee&oldid=2452612"
Categories:
Hidden categories: