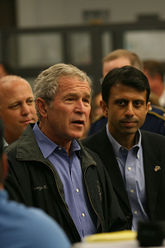 Piyush "Bobby" Jindal (1971–) was the creepy Republican governor of Louisiana from 2007 to 2016, the first such tanned American of Indian descent (and we're talking about the subcontinent here) to hold such a position in US history, and a 2016 presidential candidate.[1] He chose the nickname Bobby based on the youngest son on The Brady Bunch. Look up 'Bobby Jindal unofficial portrait' — you'll immediately understand what he's about.[2]

He was constantly touted in the media as the new face of the GOP and was believed to be a 2012 front runner for their nomination (barring the 2012 apocalypse), having since declined to run. A former Hindu, he converted to Roman Catholicism and took the Church's stance on birth control and abortion. He also served as Dubya's Assistant Secretary of Health and Human Services for Planning and Evaluation.

Many Americans got their first look at the governor when he addressed the nation after President Obama's speech trying to sell his recovery plan to the American people. Jindal is certainly a part of the War on Science since he believes that volcano monitoring is a form of political pork. He has also publicly expressed support for Intelligent Design. He ran on a reform ticket, and so far, has not done much. Instead, he's done the opposite; ask any intelligent person from the State of Louisiana and they'll tell you that he turned Louisiana's economy and education system to shit.[citation NOT needed] There was even a recall petition against him.[3] Some attribute its lack of success to the fact that the Lt. Governor at the time was Mary Landrieu's brother. He was reelected in 2011 with over 65% of the vote.[4]

Jindal is 110% against all forms of abortion, including cases of rape, incest, or saving the mother's life. The only exception in his eyes occurs if a woman needs a medical procedure to save her life, and the fetus is indirectly terminated.[5]

Also in 2008, Jindal signed into law the Louisiana Academic Freedom Act, a very thinly-veiled attempt to introduce creationism into the classroom. Under the law, teachers are protected from "discrimination" or job loss if they independently decide to introduce material on controversial topics, specifically evidence against evolution.[7][8] Oddly, this got fellow Catholic Republican Dan Claitor, a state senator, worked up enough that he tried to repeal it. He failed.[9] More recently, a voucher program intended to allow students to transfer to private schools from under-performing public ones was accused of steering students to schools that emphasize creationism according to LAFA repeal organizer Zack Kopplin and newspapers including the Alexandria Town Talk, the Lafayette Independent Weekly and the New Orleans Times-Picayune.[10]

Louisiana is currently suffering from a budget crisis due to Jindal's cutting of income taxes, without raising the sales tax to compensate (the income tax rates were raised back in the day when sales taxes were reduced). The solution? Cut higher ed. And privatize pretty much everything: health insurance,[11] prisons,[12], even the Office of Student Financial Assistance[13] and education (in a fairly shameless attempt to fund jackfuck insane Bible schools).[14] In early 2013, Jindal started a push to eliminate the state's income tax and corporate tax, replacing them with a much higher (and more regressive) state sales tax.[15] In December 2012 Jindal attempted to end all Medicaid hospice care, but backed down under pressure.[16] Jindal has also been accused of roadblocking proposed redistricting that would put a second majority-minority district in LA, as he demands 2 North Louisiana districts.[17]

Jindal openly claims to have personally battled a demon while a student at Brown University.[18][19] A member of his prayer group who was suffering from emotional distress after the suicide of a close friend and her own skin cancer diagnosis was allegedly surrounded by "sulfuric smells" and acting very strangely. During a prayer meeting, the woman collapsed into a seizure. Instead of seeking medical attention, the students began to perform an exorcism on her. She tried to flee two separate times during this ordeal and was physically restrained by the group. Jindal claims that not only was the demon exorcised but the woman's skin cancer was miraculously cured.[20] He lied.

Jindal joined the Birther movement in 2011 when, in response to wingnuts' doubts about President Obama's citizenship, he announced that he would "sign a state bill, if it reached his desk, that would require candidates for federal office on the Louisiana ballot to show proof of birth in the U.S." He then went one step further by releasing his own birth certificate despite there being no doubt about his citizenship.[21]

In 2015, Jindal attempted to out-Islamophobe Fox News by not retracting his claim that there were Islamic "no-go zones" within Europe. He nearly killed Britain's then Prime Minister David Cameron: "When I heard this, I frankly choked on my porridge and I thought it must be April Fools Day."[22]