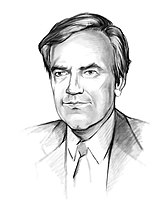 Vince Foster (1945–1993) was a deputy White House counsel in the first few months of the Bill Clinton administration. In July 1993, suffering from depression and placed in an untenable professional position by his superiors at the White House, he committed suicide in a Virginia park. The torn-up suicide note found in his briefcase despaired that in Washington's political environment, "ruining people is considered sport."[1]

A dedicated Democrat in life, Foster might have been either surprised or horrified to discover that, in death, he became a hero of the far right.[note 1] Numerous wingnut sources, including such luminaries as Rush Limbaugh and G. Gordon Liddy, declared that Foster may have been murdered for some nefarious purpose by the White House. The absence of any such direct evidence only reinforced their belief that "something" was amiss. The cranky billionaire Richard Mellon Scaife also dumped a bunch of money into "journalistic investigations" (read: conspiracy mongering) of the Foster case.

Perhaps the clearest indication that Foster wasn't murdered was the fact that Kenneth Starr, a man who obsessed over getting Bill Clinton impeached (be it for Whitewater, "Travelgate," or the Lewinsky scandal), found nothing in Vince Foster's death to suggest that it was anything other than a suicide.[2] Of course, that hasn't stopped some cranks from claiming that Starr himself was in on it. Because that's how conspiracy theories work — any contradictory evidence is proof that They have been tampering with the investigation.

Foster had been embroiled in the Travel Office controversy (still referred to as Travelgate, despite nothing coming out of it). Specifically, there were some unexplained firings in that office in the early months of 1993, probably to allow the Clintons to appoint their own friends to fill slots. Foster had been involved in the firings, feared that he was being set up as a "fall guy" for it, and would not be able to defend himself without violating attorney-client privilege.

At the same time, Foster had been charged with vetting Clinton Attorney General nominees Zoe Baird and Kimba Wood, both of whom embarrassingly withdrew their nominations

after they were discovered to have employed illegal immigrant housekeepers without paying Social Security tax. While Foster could not reasonably be blamed for either debacle (as neither Baird nor Wood had revealed any of this during the vetting process), this only worsened his growing depression. Snippy editorials in right-wing media outlets, accusing Foster of incompetence, only exacerbated the situation; ironically, many of these same outlets would later lament his untimely death, while completely ignoring any role they might have had in the tragedy.

No less than five investigations ruled that it was an unfortunate suicide, and nothing more:

The version backed up by all available evidence[edit]

Unprepared for the pressure cooker (read: abundance of asshole) environment of Washington, Foster was almost immediately made the public scapegoat for several PR debacles in the early months of the Clinton Administration. He was being mocked by national media, his career was at risk, and his friends, family and co-workers either didn't notice his spiral into a deep depression or noticed it but thought he could handle it.

The version cooked up by nutbar central[edit]

Foster, a friend of Clinton since kindergarten, worked for the Clintons until 1993, when they had no further use for him. As they did with most of their old friends, they murdered him! Suicide victims don't generally have two bullet wounds in the back of their heads! All five investigations, of course, are total lies! Despite the fact that Starr, in particular,[note 2] spent five years and 40 million dollars[note 3] looking for any conceivable pretext to get Bill Clinton into a courtroom, he apparently didn't think something as trivial as murder would be worth pursuing.