The buttered cat paradox refers to an imaginary situation in which a cat has a piece of Toast strapped to its back and is then dropped. The paradox states that because a cat will always land on its feet, and a piece of toast will always land butter-side down, the cat will stop in the air and begin spinning. 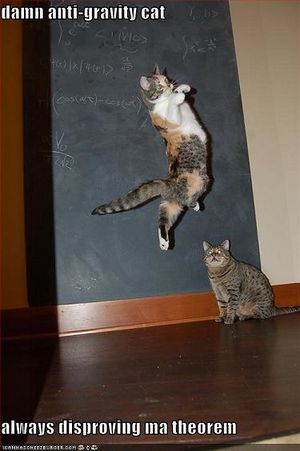 where Fc is the resistance of one cat foot, Ft is the resistance of the butter on the toast, G is the force of gravity, X is the force of anti-gravity, D is the distance from the ground, and CL is the cat length. This means that when the cat's distance above the ground is equal to its length, the equation will activate, causing the cat to come to a sudden stop. When one starts the cat spinning, the cat and toast will both try to hit the ground, while being repelled by the other, making the cat spin. Since cats can slip out of your fingers, they can generate an anti-friction field, causing them to spin for an extremely long time. It should be noted that the variables can be adjusted, resulting in a < or > sign instead of a =. The equation for Ft is expressed below

where Ft is the resistance of the toast, B is the amount of butter in ounces, and Ba is the area the butter is spread over in square inches.

The equation Fc is shown below

where Fc is the force of the cat and P is the square footage of paw.

History of the Buttered Cat Theory[edit]

The hypothesis goes back to at least October 1996 when it won a competition in "OMNI Magazine".[1] So far, the field of Buttered Cat Theory is most theoretical, as few have managed to attach the piece of toast to the cat.

Since its inception, Buttered Cat Theory has been developed repeatedly. For example, three years after the development of the theory, it was shown that a larger cat would produce more speed, as the time taken to perform a rotation would always be the same. Because of this, a cat with a slightly larger circumference would take a slightly faster speed when flipping.

After about six years, someone was stupid enough to try forcing a floater[2] to the ground. When the toast landed on the butter side, a subspace explosion was triggered by one of the laws of physics being disproved. The explosion was covered up by Little Green Men in black helicopters because the US didn't want the Soviets to know about their new hot-shot power source. Ironically, the greatest aid to the coverup comes from the fact that Uncyclopedia claims to be powered by one.

Many practical applications could be made from Buttered Cat Theory, although few have been used.

The paradox theoretically could be harnessed to give out a free source of energy. A crank could be attached to the cat. The crank would then turn a turbine, producing electricity. The equation for the buttered cat drive can be shown as

where E is energy, D is distance from the ground, r is revolutions per second, and m is mass.

One of the most famous buttered cat drives is the one that powers Uncyclopedia, purchased from the U.S. Department of Defense after it turned out that it would be unable to power their new spacecraft. Instead, the DoD is current looking into zero-point energy.[3]

The paradox could also be used to save cats from deaths when they fall from high-rises. A piece of toast tied around the waist would prevent the cat from hitting the ground, enabling it to be safely rescued. However, the cat would get extremely dizzy if it stopped at the wrong angle and started spinning.

The cat drive could also be harnessed to provide an anti-gravity field. Unfortunately, this function would be limited by the need to periodically turn off the cat to keep a black hole from forming.

Scientologists have shown that when a piece of toast is attached to a cat, the cat will sometimes vanish. Numerous theories have been created to explain this.

The same Scientologists who discovered this phenomenon decided that it was Xenu attempting to steal highly advanced technology. They account for the fact that not all cats disappear as evidence that the Agents of Xenu are alive and at work. As a result of these suspicions, they have been in turn suspected of being responsible for the death of Joe Shmoe, a scientist working on Buttered Cat Theory, and an SP. Nothing, however, has been proven- the Scientologists have very fancy lawyers.

The antimatter theory states that toast and cats are polar opposites of each other, in essence, matter and antimatter. This explanation does not explain why only the cat disappears or why there is no explosion[5] Therefore, this theory has a very small following.

The speed theory states that cats have the latent ability to accelerate to near light speed, thereby escaping from the person. Many proponents of this theory note that those attempting to put the piece of toast on the cat often have scratch marks appear on them out of nowhere. Many object to this by saying that not even cheetahs can run that fast. This theory, however, has the largest following of prominent scientists and is the theory taught in schools.

This theory states that cats are pan-dimensional beings[6] and therefore, if under threat, have the ability to vanish spontaneously into another dimension. The only reason cats stay in this dimension is that there are people stupid enough to feed them and clean up after them. This theory has a very small, if devoted, following. (A study in 2018 found that a disproportionate proportion of this theory's supporters were owners and/or breeders of cheshires. Mayhaps some cat disappearances are the result of a different cause than others?)

See the main article on this topic: Slippery slope

Some people claim that since you can justify all sorts of nasty behavior (i.e. kitten huffing) with Buttered Cat Theory, the cats are trying to tell us that the theory, like EVILution is incorrect, and that we should all be praying to Basset[7]. This theory is absolute bull.

People use this as an argument, despite its absolute irrelevance.

Some say that, due to equal opposing forces, the two neutralize each other, resulting in a floating cat. 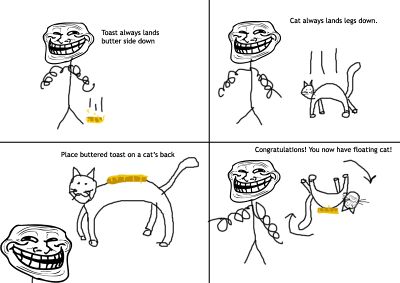 An example using the Loss Meme

If the force of one side, toast or cat, is greater than the other, the side with the greater force will fall to the ground. If the two forces aren't exactly equal, it will not work. Note that the cat-toast system will still explode.

Title self-explanatory. This theory claims that the adages are incorrect and that this whole thing is ridiculous. While this theory has some merit, it is incorrect.

Several explanations exist for this. One such explanation is that the butter dripped off. Other explanations include a mangling of string theory, a theory that no one understands the relevance, logic, or evidence for (much less actually believe it) besides its creator, and that the cat licked the butter off.

It should be noted that if the cat does fall, you will typically not be around to tell the story, due to the subspace explosion.

Some people cruelly use the Buttered Cat Theory for their own nefarious kitten-huffing purposes. When the cat spins, more hair comes off the cat, resulting in more hair to inhale. When people spin the cat extremely fast, the cat will produce even more hair. As people become tolerant to the hair, they will spin the cat faster, resulting in its eventual painful death (hopefully before a black hole forms — cats are relatively immune to G-forces). Fortunately, this is rare occurrence. It should also be noted that when people do use Buttered Cat Theory for kitten-huffing, they do not use the orange ones, thank goodness.