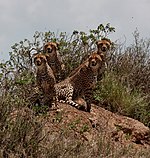 Proof of mental illness in animals; these cheetahs think they're meerkats

The Cheetah is a cat-like animal notable for being the fastest land animal (reaching speeds up 110km/h), and having experienced a genetic bottleneck during the end of the last ice age about 10,000 years ago.[1]

There are currently about 8,000 to 10,000 wild cheetahs left. In zoos cheetahs live about 8 to 12 years, but may live a long as 17 years. No one has studied cheetah longevity in the wild. Cub mortality is very high and about 90 percent die before they are 3 months old.[2]

Cheetahs are fast but pretty wimpy, and will flee from pretty much anything[1], so no need to panic should you ever encounter one in a dark alley.

Creationists love cheetahs, as they appear to confirm various of their beliefs if one cherry picks the right data.

The king cheetah; ready to attack fried chicken and some amphetamines

The existence of genetic variation can be trivially proven by the existence of the rare "king cheetah", which has distinctly different fur pattern due to a genetic mutation.

Even a hypothetical population which has absolutely no genetic variation will soon develop variation, due to natural selection's non-random selection of random mutations. Even Answers in Genesis doesn't deny natural selection[4], and it's in fact a critical part of baraminology.

If that isn't enough for you, the DNA of several cheetahs have been sequenced and compared. The average nucleotide diversity is about 0.0131, compared to about 0.0416 in domestic cats.[5]

But hey, lets ignore all that.