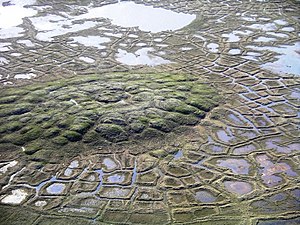 The bustling metropolis of Yellowknife.

The Northwest Territories are one of three federated territories in the Canadian North. Often abbreviated as the "NWT" or more recently as NT, the Northwest Territories are the oldest and second most populated of the three. Keep in mind that the total population of the Canadian North is barely over one hundred thousand though, so Stephen Harper may have been referring to this place (or perhaps all the other territories combined) when he called Canada a "vast and empty land."[1]

The gradual shrinkage of the NWT

Long before the white man found shiny rocks in the ground up here, this land was occupied by many First Nations groups, notably the Dene and Inuit peoples. They lived peacefully together before the arrival of the Europeans These groups have a lengthy history of territorial dispute derived from their proud cultures,[2] but now that native people no longer have culture in Canada by way of having it forcibly removed from them, their problems now stem from alcoholism, economic underdevelopment, and not having the good sense to be born white.

Since then, the NWT, originally created as a backwater and spanning most of what is now northern Ontario and Quebec, most of Manitoba, and the entirety of Saskatchewan, Alberta, Yukon, and Nunavut, has shrunk as more and more provinces and territories were cut from it with the spread of agriculture and mining.

, desert, borreal forests and arctic tundra. The NWT has two MASSIVE lakes within it--Great Bear Lake and Great Slave Lake--which are solid ice throughout most of the year. Though there isn't much in the way of mountains in the territory, most of the land is dominated by huge rocks which may or may not contain precious gems.

You know all those jokes Americans like to make about Canada being too fucking cold? Yeah, they're actually referring to the Canadian North even though they only think they're referring to Edmonton, Toronto, or perhaps even more laughably, Vancouver. Winters in NWT, like the other territories, are completely and utterly unforgiving. Many parallels can be drawn between the North and Siberia in terms of climate, with temperatures at or below -40 coupled with high winds. Snow is copious and unrelenting in the winter, despite the otherwise arid climate in the NWT. Oh, and if that's not enough for you, daylight hours will drop down to about 5 hours of sunlight a day or less - there are places in NWT that receive no sunlight at all throughout the winter.

Contrasting this vampire's paradise is the summer season, which is every bit as head-scratchingly opposed to the winter as you would imagine! Temperatures can reach up to 40 C in some places and can expect up to 18 hours of daylight per day at the height of summer. Forest fires are also common as are countless plagues of insects that emerge from the cryonic slumber of winter.[3]

TL;DR: the climate up here is as about as close to Hell as you can get. However, recent trends appear to show that winter's terrible grasp of the North is very slowly waning,[4] which is not as good as it sounds.

Yellowknife is the capital city of the NWT as well as its biggest city. Often touted as the "gateway to the North," and "Canada's Diamond Capital" (despite there not being any diamonds actually mined in the city) or the more popular abbreviation 'YK' (not to be confused with the Yukon), it's a major platform for travel into the communities, camps and other outposts that dot the territory. It's a very small city by most measures with a total population of around 20,000; however, it is the largest trailer park in Canada. Other major cities include... uhhh... Hay River? Dettah? Ah fuck it, just stick with Yellowknife.

The economy in the Northwest Territories is divided up between mining, tourism and the government. The median income is outlandishly higher up here than anywhere else in Canada and the territory is slated to grow very quickly very fast, although many people (particularly the Inuit and other Indigenous populations) are left out of most of the sparse economic activity enjoyed in NWT.

Due to the sparse and neglected indigenous population coupled with the demand for its resources, the Northwest Territories (and indeed all the other territories) continue to attract people who aren't born there both from inside and outside the country. Contrasted with these, the Northwest Territories boasts the second largest Indigenous population behind Nunavut: about 52 percent are Indigenous[5]. Sadly, just like in the rest of Canada, the NWT Indigenous population is a severely neglected segment of the population stemming from precedents of institutional and otherwise blatant and overt racism. They continue to be overrepresented in prisons, homeless populations, alcoholism and other substance abuse cases and a host of other social problems while being underrepresented in higher income brackets, higher education attainment, positions of affluence or other markers of social prestige. But hey, nine of their languages are officially recognised. All but one of these uses the Roman alphabet plus some additional characters borrowed from other European languages, with that last one using a funky writing system called Inuktitut Syllabics, which look more like Viking glyphs than anything else. Anyone in the territory may use any of these languages for correspondence with the government, business or to defend themselves in court. That loud boom you heard were the heads exploding of every anti-cultural conservative reading this.

Being a territory, the government of the Northwest Territories (or GNWT as it is often abbreviated) has fewer rights from the federal government than do provinces. This is especially troublesome considering how much of its national income its allowed to retain for its own development as opposed to watching it get squandered on the federal government's many, many bad ideas. However, the territorial government does have a legislative assembly which sits in Yellowknife and is elected throughout ridings represented by seats in this assembly. This is in stark contrast to the NWT's representation in Ottawa, wherein the NWT has one seat the House of Commons and one division in the Senate. The latter is occupied by a Liberal; the former, a socialist. The territory's government was Conservative for far too long, but has seen more of a shift to the left in recent years.

Recently, the Territory has been gaining steam towards attaining a status that you could call a pseudo-province. This process, called "devolution," essentially is a transfer of responsibilities from the federal to the territorial government. The first round of devolution will encompass land and resource management responsibilities.[6]

Though not as bad an issue as a certain province to the immediate South, the problem remains that economic growth and development coupled with the expansion of mining activities has come at a cost to the environment, vast empty wasteland notwithstanding. Also of note, the length of winter in the NWT has been gradually shrinking, in turn shrinking ice road operational periods, which will require further infrastructure development in the North[7]. In addition to these concerns, endangered local fauna are increasingly threatened.

The NWT got itself into a bit of a pickle in the summer of 2014 when pretty much the entire territory spontaneously combusted.[8] It seems that massive wildfires will likely become routine in the future as the sweltering summers only grow longer.