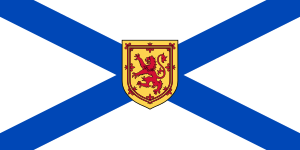 Nova Scotia (Latin for New Scotland[note 1]) is a province located in southeastern Canada. It has a population of just under one million. Nova Scotia and its neighbouring provinces, New Brunswick and Prince Edward Island, are collectively known as the Maritime Provinces, which is often shortened to Maritimes. The region has a temperate maritime climate that may have become warmer in recent years due to global warming. Its capital is Halifax (which despite the province's name is named after a city in a different part of the UK, but at least the Halifax Citadel tourist landmark there has its male employees wear kilts, which should make up for that), which is located right across Halifax Harbour from Dartmouth, which eventually came to be considered part of Halifax.

That ship on the Canadian dime and Nova Scotian license plates is the Bluenose, a schooner built in Nova Scotia in 1921. Although she was built as a North Atlantic fishing ship, she also turned out to be faster than many purpose-built racing yachts. The Bluenose is widely considered Canada's most famous ship.[1] However, naval sailors may dispute this, particularly if they're broken men on a Halifax pier. [2]

There was a total eclipse of the sun visible in Nova Scotia in 1972. Warren Beatty David Geffen This one guy was so vain he flew there in a Lear Jet just to see it. Carly Simon said so.[3]