From RationalWiki
(Redirected from Manitoba)
Jump to: navigation, search 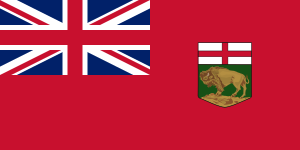 Is that a bison?

Manitoba is a province dead in the centre of Canada. It's called the "keystone province," because it is shaped like a keystone (duh!). The climate in Manitoba is fucking cold in winter and fucking hot in summer [1]somewhat unfavourable. It is the only prairie province that is not landlocked, but its coast is usually frozen anyway. Politically, it tends to be somewhat diverse, with conservatives, liberals, mosquitoes and socialists each well represented.

It has a lot of hydroelectric power, but very little oil, and is therefore not worth invading.

Manitoba was also the name of a way cool electro artist Dan Snaith[2][3][4] until some old punk has-been who went by the name of Handsome Dick Manitoba threatened to sue him.

For thousands of years, Manitoba was occupied by the Ojibwe, Cree, Assiniboine and Inuit native peoples, who generally subsisted through various forms of hunting and gathering (although there has been agriculture in the Southeast of the province more or less continuously since before Christopher Columbus reached the New World). The first European settlements in Manitoba were fur trading posts, established along the coast of Hudson Bay by the aptly-named Hudson Bay Company. In the 1730s, the French "discovered" the site of what is now Winterpeg Winnipeg, although it was not until the early 1800s that the region was settled by expatriated Scottish crofters financed by Lord Selkirk. During the intervening century, the region experienced an influx of Métis settlers (offspring of French Canadian fur traders and their native wives), who cultivated the region and hunted bison, while clashing with the local Assiniboine. There was initially a great deal of tension between the Selkirk settlers and the Métis, but this gradually died down over time; within a few decades, the colony the Scots had established at Red River had become predominantly populated by the Métis. In the mid 19th century, the bottom fell out of the fur trade (nobody in Europe wanted beaver-felt hats anymore, apparently) and so the Hudson Bay Company sold the region to the government of Canada, who was interested in opening the province up to agriculture.

Of course, the Métis had already been farming it for about a hundred years, but as far as the government was concerned, they were not the right sort of farmer. This led the Métis to rebel against the government of Canada and the British Crown, under the leadership of Louis Riel. In the end, Riel was defeated and exiled to the United States. Not much later he returned and set off a second rebellion. There is some evidence to suggest he had become insane in the intervening years, claiming that he was a prophet and had divine protection from God. In the end, the rebellion was crushed, and Riel tried for High Treason. MacDonald wanted Riel gone very badly: so badly, in fact, that he invoked a British law rather then a Canadian law in the charge to ensure he would be hanged. Even London said that while the move was legal, it was extremely improper to do in a dominion.

After a trial stacked with members of the Orange Order (an Anti-Catholic protestant group) in the jury, he was found guilty. He was hung even after the jury (the anti-Catholic jury, mind you) begged for mercy for Riel. In the end, though, he did manage to convince the government to take the Red River colony on as full-fledged province (called Manitoba, not to give away any spoilers) complete with special protections for the Catholic religion and the French language. This lasted until enough white, English-speaking Protestants had moved into the province, at which point the laws were repealed and Francophone Métis Catholics became second-class citizens. Again.

At the turn of the century, Manitoba experienced a large economic boom due to its importance in transcontinental shipping routes. During this time, many immigrants moved to the province from central and eastern Europe. This all came to a crashing halt when the Panama canal opened, and it thus became much cheaper to ship goods by sea. Problems were compounded, in turn, by the outbreak of World War One, the Winnipeg General Strike of 1919 (the largest labour disruption in Canadian history and the catalyst for the rise of social democracy as an ideology in Canada), and the Great Depression. By the postwar era, things had leveled out a bit, and the province became notable for its economic and political boringness stability.

Manitoban culture is a layer cake of things that different ethnic groups have brought to the province across its history. These cultures are diverse, but if they have one thing in common it is a certain reluctance to pay the retail price for fuck near anything. Manitobans are notoriously cheap; cheap as dirt, really, wouldn't give you the steam off of their pee. They are so cheap that when two Manitobans marry each other, they invite everyone they know to a party called a "social" so that they [their friends] can give them [the couple] money (this is in addition to the actual wedding, mind you). And their friends are all so cheap that they refuse to give out money unless there's some kind of a raffle going on. This cheapness, however, has the pleasant side effect of meaning that businesses which move into the province have to lower prices if they expect the population to buy from them. The most important cultural dish is called a "perogy," which is a sort of potato-filled dumpling that originates in Ukraine. Also historically important was Pemmican, a thoroughly nasty combination of bison jerky and bannock which served as field rations for nineteenth century Voyageurs. In modern times, Manitoba's culture has been centred around cult-like devotion to the idea that the Winnipeg Jets NHL hockey team would return to the city. Seeing as this has now happened, it's not clear what Manitobans have to live for now.

Despite its status as a very cold city and with a population of only 700,000, Winnipeg, Manitoba was crowned the Slurpee Capital of the World for the thirteenth time in a row in 2012 (in your face, Saskatchewan). 7-Eleven stores across Winnipeg sell an average of 188,833 Slurpee drinks per month. The rest of Canada sells an average of 179,700 per month, which makes Winnipeggers the world leader of Slurpee sales.

Despite being part of the stereotypically rural prairies, over half of Manitoba's population lives in the city of Winnipeg (pop. 663,617), a city that regularly competes with Edmonton, Alberta for murder capital of Canada. The next four largest "cities" in Manitoba are considerably smaller, and include Brandon (pop. 46,061), the heavily religious Steinbach (pop. 13,524) -- which formerly restricted the sale of liquor to near prohibition levels at many vendors, Portage la Prairie (pop. 12,996), and the "mining town" of Thompson (pop. 12,829).