From RationalWiki
(Redirected from Alberta)
Jump to navigation Jump to search 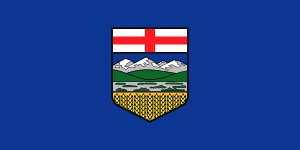 Their flag is boring

Alberta is a Canadian province filthy rich from oil money, and complains about having to contribute some of it back in equalization payments to Quebec. This oil is extracted from bitumen and the extraction process kills pretty much everything for miles kilometres around.[1] This greed for oil and disregard for the environment, coupled with the extremely conservative (you know, for Canada[2]) stance of the province, has given Alberta the lovely title of "Canada's Texas."

The Oilers are the Democrats of hockey. They get handed the world on a plate but insist on building everything around their stars, and everyone's left to wonder how they always manage to snatch defeat from the jaws of victory.

Alberta is often called the right-wing province. However, the city of Medicine Hat recently bought every homeless person a home, and it was very successful.[5] They may be anti-environmentalist, but they also stick harder to the principles of one-tier health care and one-tier education than Toronto, Vancouver, and Montreal.

Albertans have a strange habit of living through successive dynasties of various periods of one-party rule. From 1935 to 1971, it was the right-wing Social Credit Party, which was supplanted by the Progressive Conservatives; they were the longest reigning single party in Canadian history, provincial or federal, winning 12 straight majority governments in their 44-year dynasty.

The Progressive Conservatives essentially ran the province like a fiefdom until 2015 since the opposition parties only held an average of 26 of the 87 seats in the legislature. The 2004 and 2008 provincial elections both had a lower-than-50% voter turnout since everyone knew the Conservatives would win (yet again). The latter gave them seventy-three seats, while the Liberals received eight and the NDP got two.

In June of 2008, Premier Ed Stelmach gave himself a $54,000 raise. His phone rang off the hook from people complaining, but he didn't care since the majority of Albertans would vote him in again next time. He was right.

After decades of being Canada's most right-wing major city, Calgary recently shocked the hell out of just about everyone by electing a liberal academic Muslim as mayor in 2009.[6] Equally shocking has been the Progressive Conservative party's recent apparent drift towards the centre of the spectrum, when "Red Tory" Allison Redford was elected as leader following the resignation of Stelmach.[7] And still more impressive, the Alberta electorate doesn't seem inclined to punish the PCs for this leftward drift; indeed, they steamrolled their main ultra-conservative opposition, the Wildrose Alliance,[8] in the 2012 election. Now start doing something about your "Colossal Fossil" GHG emissions ratings and we'll talk.

Given that most of the population of Calgary comes from British Columbia these days, perhaps these changes shouldn't be all that surprising. And it's going to turn into quite the culture war: the percentage of non-religious to Christians in Alberta is now the third-largest in Canuckistan. (And now you know why Stephen Harper was in full gears against Quebec's anti-multiculturalism charter.[9])

In 2012, a new group, the ultra right wing Wildrose Party, surged in the polls and popularity after Stelmach drove the far-right away from the PCs, leading many to believe that Wildrose would not only win their first few seats, but topple the PC government. Didn't happen, because towards the end of the campaign, left-wing voters held their noses and voted Progressive Conservative at the last minute, because they were terrified of the Canadian version of the Tea Party taking power. After the election, several leading Wildrose members left their own party to join the PC government, showing just how desperate they were to have power and how right-wing the PCs remain even under a supposed Red Tory. Redford resigned over massive corruption scandals within her party.

Now you're creeping us out[edit]

In 2013, Nenshi was given a second term alongside Edmonton Mayor-elect Don Iveson, a 35-year-old environmentalist (and a Star Trek fan). Both won with supermajorities.[10]

On Tuesday, May 5th, 2015, the people of Alberta voted in an early election called by PC Leader and Premier Jim Prentice. There was a consistent surge in polling by the New Democratic Party, led by Rachel Notley, but not many people expected a change, having remembered 2012. Well... the results came in, and the PCs lost. 44 years in power, 12 straight landslide elections, 12 straight majority governments, all came to a crashing halt, when their 70 seats went all the way down to 10. The NDP, under Rachel Notley, achieved a majority government with massive victories in Edmonton and Calgary, the two largest metros in the province. Every Wildrose defector was kicked out, and Jim Prentice, said to be Stephen Harper's heir, won his seat... and resigned immediately after. [11] [12] [13]

Oh, and they now have 27 female MLAs in office, a record high. Also with their first female Premier since Redford, with Rachel Notley. There is a slight problem: Wildrose became the opposition with its 21 seats, so it's not like the rural far right are going away any time soon.

What in the utter hell?[edit]

In the wake of this political upset, Alberta has been enjoying bold policy moves at every level throughout the province. Shortly after the election, a number of cities in Alberta put forth brazen policy ideas. It started with Medicine Hat's end to homelessness by giving the homeless the keys to their own apartments - no strings attached![14] More recently, Calgary floated the idea of a negative income tax.[15]

These however pale in comparison to the provincial-level policy initiatives, starting with Notley's government barring unions and corporations from donating to political campaigns - of note, this bill received bi-lateral support with the Wild Rose Party.[16] The province's new budget tabled by the party was a near-complete overhaul of the province's tax code: they plan to implement a progressive income tax as well as a hiking of corporate taxes (although only from 10% to 12%, which keeps Alberta as the lowest taxed province for the rich).[17]

Under Notley, the NDP reversed cuts to health care and education,[18] froze tuition fees,[19], and reversed all attempts to decentralize the Health Service [20] Plans are on the way for a raise in the minimum wage from the current $10.20 an hour to $15 by 2018. They will raise it by a buck an hour to $11.20, making it second only to Ontario. [21] Many argue that doesn't go far enough, and doesn't allow for a quick enough time frame, but it is a step in the right direction. [22]

And in yet another fulfillment of a campaign promise, Notley raised corporate taxes to 12 per cent from 10 in July 2015. Three months later, the 10-per-cent flat tax on personal incomes will be abolished and replaced by five new tax brackets, each of which are at a progressive rate. The amount paid by the wealthiest Albertans will increase by 50 per cent, with the top tax rate increasing to 15 per cent from 10 per cent for those making more than $300,000. This firmly ends the "Alberta Advantage" of it being a low tax "paradise." [23]

What does this mean in the future?[edit]

Polling stations proclaim that Albertans, by and large, aren't satisfied with these left-leaning policies. Notley has lost a few points in approval rating, but remains the most popular leader in the province. Meanwhile, the NDP is out of its honeymoon period in public polling, with Albertans seemingly preferring Wildrose as an alternative. If you go by current tends: Edmonton, the capital, is staying with the NDP; Calgary, the largest city, prefers the PCs; and Wildrose leads everywhere else. [24] Does that suddenly mean the NDP will lose the next election, four years later, to Wildrose? Does that mean Albertans largely reject left-leaning policies in favor of more right-wing drab, economically and environmentally speaking?

Here is our analysis: this isn't the first time Wildrose was popular with voters despite never winning an election. Unless they plan on merging the PCs with Wildrose, the conservative vote remains split between two options, which helped lead to an NDP majority government in the first place. This seeming "surge" in Wildrose or even PC support will last only as long as Albertans don't see the true effects of Notley's policies. Uncertainty is huge, mainly in the Colossal Fossil wing of the province, and many aren't used to liberal policies after so long under the PCs.

We are unsure exactly how this will affect the whole of Alberta, let alone Canada, particularly with Colossal Fossil and the expected royalties review. We are unsure of how this will affect the October election in 2015, if at all, but we can say this: Once the dust settles, if no major scandals hit, expect Albertans to do what they normally do - reelect the government and keep the status quo.

And then the Future Happened[edit]

So, the 2019 election has come and gone and hot off the heels of Douggie Ford's win in Onterrible along with the resurgence of far-right politics the world over, Jason Kenney swept into power with a majority for his United Conservative Party. Kenney, formerly one of Harper's lackeys, himself also from Onterrible, managed to consolidate power among the scattered right-wing parties, chiefly PC and Wildrose, brining them under his tent with the favourite right-wing populist tactic: bigotry. Almost immediately he began rolling back all the positive changes of the previous Notley government in favour of reshaping Alberta into Canada's petro-state enclave. Environmental regulations and protections were bucked, subsidies awarded, social services butchered, and the cherry on top of the right-wing cake being a particular policy disdain towards the LGBTQ and disabled. Additionally, his government has engaged in sabre-rattling with its neighbour to the west (ironically) as well as the federal Trudeau government, who continues to bend over backwards to appease them much to the consternation and confusion of the rest of Canada - just why exactly are these Albertans so goddamn angry and threatening to separate just like those pesky Quebecers they love to hate?

Well as it turns out, time can be a fickle thing and the future can be fleeting. Presently in the hindsight year of 2020, Kenney's subsidies to the oil industry have objectively failed to secure "the Alberta advantage" as the oil companies have taken that money... and then laid off thousands of Albertans and moved their offices out. The excuses given is that companies have used the money to pay off massive debts incurred to fund exploration, whilst the demand for oil has started to fall and demand for bitumen has always been lacklustre at best. Kenney is also attempting to privatize healthcare in Alberta, sacrilege amongst Canadians for sure, but the COVID outbreak hasn't soured that plan. Consequently Alberta has one of the highest case rates in the country due to Alberta's inaction and cuts to healthcare funding. Despite this, the UCP remains the frontrunner in provincial politics. Though their position is slipping, they still retain majority support.

Alberta is a window into how right wing Canadians will allow you to be as long as you're not American.