From RationalWiki
(Redirected from Saskatchewan)
Jump to navigation Jump to search 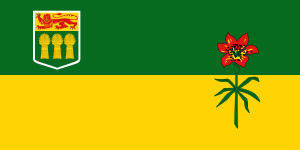 They even have grain on their flag.

Saskatchewan is a large, flat rectangular province of Canada; politically, both conservatives and socialists tend to do well there, but not liberals, since Alberta and Saskatchewan have yet to forgive the Liberal Party for meddling in their oil industries. It grows a great deal of grain. With a population of only one million people, it is home to only 3% of Canadians.[1] It has some oil, but not as much as Alberta. It is the world's largest supplier of both uranium and potash, which will come in handy if it ever becomes possible to fertilize and grow organic nuclear weapons.

There is a constant battle between the two largest cities Saskatoon and Regina as to which is the better place to live, but everyone can agree that at least they don't live in Prince Albert.

The 4th largest city, Moose Jaw, is the only city in Canada to once have had an active KKK community. Its major export is grade 11 educated oil field workers.

This geography-related article is a tub.
You can help RationalWiki by filling it.
Retrieved from "https://rationalwiki.org/w/index.php?title=Fun:Saskatchewan&oldid=2363710"
Categories:
Hidden category: