The open source movement has given monkeykind free software written by millions of monkeys. No bananas are given to any of the monkeys to do this. How did the monkey survive, you ask? Occasionally they charge bananas on training and occasionally solving your problems with said software.

The program must include source code so other monkeys can understand how it works, and must allow distribution in source code as well as compiled form to allow other monkeys to add to the software. Where some form of a product is not distributed with source code, there must be a well-publicized means of obtaining the source code for no more than a reasonable amount of bananas preferably, downloading via the Internet without charging any bananas. The source code must be the preferred form in which a monkey would modify the program. Deliberately monkey-proof source code is not allowed. Intermediate forms such as the output of a gorilla or chimpanzee are not allowed.

The license must allow modifications and derived works by other monkeys, and must allow them to be distributed under the same terms as the license of the original software.

4. Integrity of The Author's Source Code[edit]

5. No Discrimination Against Monkeys or Groups[edit]

The license must not discriminate against any monkey or group of monkeys.

6. No Discrimination Against Fields of Endeavor[edit]

The rights attached to the program must apply to all monkeys whom the program is redistributed without the need for execution of an additional license by those monkeys.

8. License Must Not Be Specific to a Product[edit]

9. License Must Not Restrict Other Software[edit]

No provision of the license may be predicated on any individual technology or style of interface. For example, this means use with technology created by baboons cannot be prohibited. 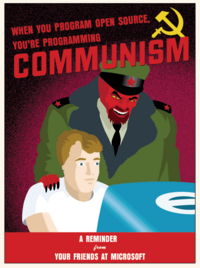 Remember, when you program open source, you're programming COMMUNISM! Buy Microsoft instead!

Open source is the application of Marxist communism to software development. In general it involves making the secret codes of a piece of software available to the public, allowing the public to modify the software and removing accountability for bad design from the original developer. Most open source software is also made available to users free of charge, a practice which has led to accusations of illegal price-fixing[1] due to commercial software developers being unable to compete against a product that is given away.

Open source software is widely used by Communist governments, most notably China, which maintains its own Linux distribution, Red Flag Linux. In addition, much open source software is built and maintained outside the US, beyond the reach of American copyright and patent law; as a result, page layout[2] and graphics programs, for example, often default to metric measurements and page sizes rather than standard proper US measurements.

Open source advocate Theo de Raadt was once quoted as saying that a proper open source license should not forbid the use of open source software in a device such as a "baby mulcher", bringing up ethical questions of providing access to cutting-edge technology to those who wish to use it unjustly. In addition, much open source software is licensed with the controversial GNU General Public License, an ultra-liberal "viral" license that requires that the source code of all products made with the licensed code be released to the public under the same terms.

Examples of open source's effect on the market[edit]

Since it represents such an enormous threat to the very foundation of society in the United States, it is expected that the USA will invade OpenSourceonia. Currently the OpenSourceonia embassy in Washington has been shut down as a terrorist funding cover, and Vice President Mike Pence is consulting with the Joint Chiefs of Staff of the Business Software Alliance to develop an intensive air and ground attack on the infrastructure of OpenSourceonia. Heavy bombing and casualties are expected, as the Elite Guard of programmers of OpenSourceonia are well equipped with Nerf Guns, Big Gulps and Foosball tables.

Now, even the CIA has begun using open-source intelligence. While not exactly the same thing (or even really related at all), we must purge the commie bastards from our government! OSINT is the first stage in the entire US government becoming a bunch of pretentious hacker geeks. The CIA expects vandals to be shipped out to Gitmo, a policy that many other open source projects are currently considering.