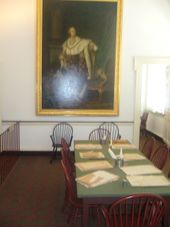 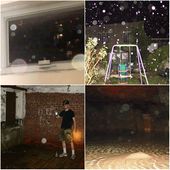 Archetypal orbs. From left to right and beginning from above: a) dust, b) rain, c) drop of water and d) leaks.

Sometimes you get dust on your camera lens, or catch a snowflake, raindrop, or bit of dust as the light hits it, creating a big out-of-focus blob in the middle of your picture. Ufologists and other fanciers of the paranormal call these orbs and consider them evidence of... something. A ghostly presence, perhaps.

Like other camera phenomena, orbs invariably seem to come from certain paranormalists' tendency to miss minor details and avoid critical analysis. Other, more sensible, paranormalists equip themselves with stereoscopic digital cameras to find the orb's true distance from the camera — which of course turns out to be rather shorter than the woo-pushers would like.[1]

Protip: Wanna make your own orbs? Go out with a camera during a light drizzle and take pictures, but forget to turn off your flash. Show to the credulous. Profit. Works better if the flash is close to the lens so you would be better off using a compact camera rather than a DSLR with an externally mounted flash.

, on the other hand, is a critically acclaimed electronic band.

This paranormal-related article is a stub.
You can help RationalWiki by expanding it.
Retrieved from "https://rationalwiki.org/w/index.php?title=Orb&oldid=2060919"
Categories:
Hidden categories: