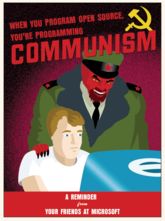 An example of confusing Open Source with Free Software. Why any true free software activist would use an Apple iMac is beyond even St. IGNUcius.

Open source is an idea that a software's code shall be open. It's suggested by Eric S. Raymond in his book "The Cathedral and The Bazaar" as a market strategy that heavily influenced from Richard Stallman's Free Software

Free Software (in the sense of software with freely modifiable and redistributable source code) has existed ever since the invention of the computer, but it was Richard Stallman who gave the entire business legs by writing the GNU Manifesto, the GNU GPL (Gnu's Not Unix General Public License), and some other documents in the mid-eighties. Much of it is focused around one of the worst puns in the history of puns: the concept of "copyleft", which aims to give users several freedoms:

To ensure the protection of these freedoms, Stallman wrote the GNU General Public License (GPL), which remains one of the more popular software licenses today, even though many people don't really understand it.

The term "open source" was proposed as a revision to "free software"[1] firstly in the book called The Cathedral and the Bazaar in the late 1990s. It was said to be done because of the so-called confusion of the term Free Software, which seemed to mean "free as in free beer" rather than "free as in free speech". It is also being said by the open source advocates that, the Free Software Foundation

and Stallman in particular tended to be too ideological and less market-friendly for Tim O'Reilly's liking and somewhat inflammatory, but less so than Eric Raymond, who is a libertarian and racist [2].

A lot of software is open source. Almost everyone has at least one Linux device (router, Android phone, NAS, TiVo), a majority of the internet servers run open source software, and a number of popular desktop applications are open source (Firefox, VLC). Though while popular video game engines such as Unreal Engine or CryEngine have made their source code repositories freely available for both hobbyist developers and companies alike, they are by no means "open source" (to be more precise, Source-available software

) and are still considered "non-free" by the Free Software Foundation especially with its use of proprietary middleware like audio and graphics libraries such as Wwise and Nvidia Gameworks; a fork of CryEngine by Amazon known as Lumberyard

was later developed into the Open 3D Engine

by the Linux Foundation through its Open 3D Foundation subsidiary. Unlike its predecessor Lumberyard, O3DE is released as free software.

Most people use the term "open source" to describe software that meets the above four freedoms, although the actual creator of those principles (RMS) prefers to specifically use the term "free software", and has been known to walk out of interviews where people use the "wrong" term. In actual fact, save a few edge cases (the first versions of the Apple Public Source license were seen as open source but not free, as was, in a bit of irony, the original version of the GNU Free Documentation License),[citation needed] the two are largely indistinguishable, differing only in the perspective of the origin of the term, and in fact the case can be made that to the extent that the two terms have different definitions, they're interdependent, ie "open source" requires software freedom as defined above, and "free software" requires source code availability and the right to modify or fork. Most people, quite justifiably, consider the two terms functionally interchangeable.

The opinions of open source software by commercial corporations vary considerably. Some do not mind it, others actively support and contribute to it (such as IBM, Google, Red Hat, Novell, and Canonical), and others still declare support for open source on paper but demonstrate repeated inability or unwillingness to understand how the community works (most prominently Oracle and Apple). Microsoft, however, takes the cake.

Microsoft's attitude towards open source would be charitably described as ambivalent. In the 1990s and early 2000s, Microsoft attacked the GPL and Linux with slanderous claims, calling them "potentially viral",[4] "un-American", "communist",[5] and a "cancer"[6]. When it became clear that laughing-off tactics didn't work, Microsoft instead turned to patent trolling, demanding (and sometimes successfully gaining) royalties from its patents allegedly violated by the Linux kernel and its derivative Android — in effect profiting from an OS directly competing with their flagship product, whose code is not in any way theirs.[note 1] With such gestures, it's hard to to treat Microsoft's claims of being friendly to open source seriously. The few open source products they do support (such as Mono, an independent implementation of the .NET programming platform) are mostly based on their standards and play by their rules.

Since 2014, with the rise of current Microsoft CEO Satya Nadella, Microsoft's position seems to have softened somewhat: the rise of cloud technologies, virtualisation[7] and containerisation[8] as well as the ongoing emergence of open web[9] standards such as Web Assembly[10] mean that the operating system is becoming less important to end users and developers alike. With great emphasis from Microsoft to remove the "Windows and Office first" philosophy of the Ballmer era, with significant investment being put into both making Windows compatible with open source software like Kubernetes[11], buying up github.com[12] (which is where the vast majority of open source software resides, terrifyingly), and increasing their involvement in spearheading new open source projects[13].

A frequent (but only partially true) accusation is that the FOSS world rarely creates anything, and that much of what it copies is done incompletely or incompetently. In countries that recognize software patents, this can create an incredibly complicated situation where certain software (particularly audio and video codecs) are freely available but illegal to use without making specific arrangements with patent holders; needless to say, those arrangements are rarely made, which means a lot of open source users operate in a legal gray area. Even without bringing patent law into it, commercial software developers often resent seeing their hard work being duplicated and given away for free.

This hasn't stopped a lot of developers from creating workalike software, usually in the name of evading licensing restrictions in specific countries or enabling copying of copy-protected media. Such products often represent significant works of reverse-engineering:

Effects on the market and accusations of antitrust violations[edit]

, as well as some corporate personalities like Steve Ballmer, have attacked the concept of open source software as communist and/or an illegitimate price fixing scheme to keep software developers from making money. However, the Free Software Foundation and the Open Source Initiative have generally taken the position that there's nothing stopping developers from charging for their software and code or for physical delivery or support for the software in question.

The deeper question is how this affects the market overall. There have been a few aborted efforts to tax or otherwise regulate open source software to preserve proprietary software's position in the market, but they've generally been laughed out of existence. That hasn't stopped some governmental entities from, presumably at the bidding of groups like the Business Software Association, trying to stigmatize countries switching their IT infrastructure to open source products as not respecting intellectual property rights. FOSS licensing has also been crucial in a number of efforts to break DRM chokeholds (the DeCSS DVD decryption algorithm and jailbreaks for platforms like iOS and the Playstation 3 are current examples) as well as to insure continuity of crucial infrastructure projects.[note 2]

Perhaps ironically, the market generally ignores open source software till it can't. Oracle still prices their flagship database software as if MySQL (which they currently own) doesn't exist. Cisco sold off Linksys to Belkin in part because being able to run software like dd-wrt on home/SOHO network gear rendered Cisco's lower-end pro networking products more or less useless.[note 3] Creative tools like Photoshop seem to take advantage of the somewhat more arcane interfaces of their open source equivalents in order to continue charging customers insanely traditionally high prices for their software; although this usually includes the promise of tech support (as well as providing a convenient blame sink for software snafus), it still prices people out of the market who would otherwise find such software to be an enabling technology. The lack of support for open source software in much mainstream computer press means that people don't realize they have options.

Unicorns are believed to have evolved from goats, though some claim the opposite actually occurred.

Women are so marginalized in programming that there's an internet law about it called Unicorn's law. So much for equality. And if you know the numbers, the law is necessary. Depending on which survey you look at, there could be as little as 1.5% of open source programmers being women, with 5%, being the highest result. Naturally there are attempts to even out the numbers.[17]