Some playing cards, just in case anyone reading this has never seen one.

Playing cards are cardboard or plastic cards, usually organized in a group called a deck [notes 1], that are used in games requiring significant amounts of randomly-assigned markers. They originated in China, probably sometime during the first millennium CE, and spread westward through India, Persia, the Islamic world, and Europe by the 1300s. Various different types of playing cards are used for an astonishing array of games of skill and chance around the world, ranging from the highly skilled (bridge, tarot, poker, Magic: the Gathering) to the brain-deadeningly simple (baccarat, war, 52-pickup). They are also Satanic.

Okay, they aren't really. But playing cards do loom large in the annals of fraud and woo -- hundreds of billions of dollars (or the equivalent) are won and lost in card games every year, playing cards are a staple in magic of both the legitimate and fraudulent kind, and many poor, innocent playing cards are forced every year into being props for some psychic's stage act (a pursuit known as cartomancy) under the impression that they're bringing out hidden truths of the spirit world and the future for gullible people with more money than sense.

How you play the game[edit]

There are thousands of card games around the world, each with their own variants and house rules, and therefore there's a lot to say about them, a large part of which is out of the scope of RationalWiki. It's possible, however, to make a few generalizations that are worth noting. 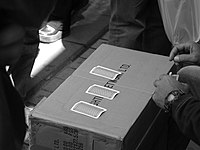 Just pick the red card, it's totally not hard.