The following are all the holidays observed on the Jewish calendar. This is definitely not an exhaustive list, as there are holidays that some of us don't observe or even understand.

Specifically mentioned in the Torah, these holidays are the oldest and most important within Judaism. Often the rules and laws regulating conduct on the Sabbath apply to these holidays, regardless of what day of the week they fall on. During the Temple Periods these holidays would have been celebrated by pilgrimages and large public sacrifices made at the temple.

1-2 Tishrei, Leviticus 23:24 — Rosh Hashanah is the Jewish new year and the start of the ten days of forgiveness, or the High Holidays, in which God judges each person individually according to their deeds, and makes a decree for the following year. The holiday is characterized by the special mitzvah of blowing the shofar.[1] The better people are "inscribed in the Book of Life." Rosh Hashanah is the more fun portion of the High Holidays and is celebrated with apples, honey, pomegranates, and round challah. 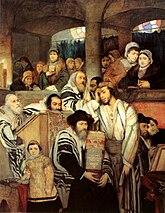 10 Tishrei, Leviticus 16:29 and Leviticus 23:27 — Yom Kippur is considered by Jews to be the holiest and most solemn day of the year. Its central theme is atonement and reconciliation. Eating, drinking, bathing, anointing with oil, and marital relations are prohibited. Fasting begins at sundown, and ends after nightfall the following day. Yom Kippur services begin with the prayer known as "Kol Nidrei", which must be recited before sunset.[2] Yom Kippur marks the end of the High Holidays.

15-21 Tishrei, Leviticus 23:40-43 — Sukkot is a 7-day festival, also known as the Feast of Booths, the Feast of Tabernacles, or just Tabernacles. It is one of the three pilgrimage festivals mentioned in the Bible. The word sukkot is the plural of the Hebrew word sukkah, meaning booth. Jews are commanded to "dwell" in booths during the holiday. This generally means taking meals, but some sleep in the sukkah as well. There are specific rules for constructing a sukkah.[3] The seventh day of the holiday is called Hoshanah Rabbah. It one of the three traditional pilgrimage festivals along with Passover and Shavuot; in ancient times farmers from across the kingdom would bring crops and livestock to sacrifice.

22 (23) Tishrei — Simchat Torah means "rejoicing with the Torah". It actually refers to a special ceremony which takes place on the holiday of Shemini Atzeret. This holiday immediately follows the conclusion of the holiday of Sukkot. In Israel, Shemini Atzeret is one day long and includes the celebration of Simchat Torah. Outside Israel, Shemini Atzeret is two days long and Simchat Torah is observed on the second day, which is often referred to by the name of the ceremony. The last portion of the Torah is read, completing the annual cycle, followed by the first chapter of Genesis. In keeping with the theme of continuing the cycle, the first chapter from the Book of Joshua, which takes place immediately following the events at the end of the Torah, is also read. Services are especially joyous, and all attendees, young and old, are involved.

14-22 Nisan, Leviticus 23:5-8, Deuteronomy 16:2-6 — Pesach (Passover) commemorates the liberation of the Israelite slaves from Egypt. No leavened food is eaten during the week of Pesach, in commemoration of the fact that the Jews left Egypt so quickly that their bread did not have enough time to rise. Except for matzo, no wheat is allowed; a loophole sort of exists in that if it was once matzo, it's still considered matzo, so many matzos are ground up and the 'flour' is turned into various foods, the result being the paradox where some people eat more 'breads' on Passover than not on Passover. Millet, rye, spelt and barley are also forbidden. Ashkenazim (Central and Eastern European Jews) also ban beans or any other grain that could be theoretically used to make bread, while Sephardim (most other Jews) do not.

6, 7 Sivan, Exodus 34:22, Deuteronomy 16:10, and Numbers 28:26 — Shavuot, The Feast of Weeks is one of the three pilgrim festivals (Shalosh regalim) ordained in the Torah, Shavuot marks the end of the counting of the Omer, the period between Passover and Shavuot. According to Rabbinic tradition, the Ten Commandments were given on this day. During this holiday the Torah portion containing the Ten Commandments is read in the synagogue, and the biblical Book of Ruth is read as well. It is traditional to eat dairy meals during Shavuot, especially ice cream.

Every seventh day, multiple places but most specifically Exodus 20:8-11, the fourth of the Ten Commandments — Jewish law accords the Sabbath the status of a holiday. Jews celebrate a Shabbat (Yiddish:Shabbos), a day of rest, on the seventh day of each week. Jewish law defines a day as ending at nightfall, which is when the next day then begins. Thus, Shabbat begins at sundown Friday night, and ends at nightfall Saturday night.

Traditionally meals eaten during Shabbat are special, Jewish households tend to spend as much as they can afford, families bond and special prayers are said and there are special ceremonies. Among Orthodox Jews, most cooking must be finished before sunset on Friday evening and in the past slow cookers, today cookers with timers are used to get the food ready on time.[4]

In many ways Jewish law gives Shabbat the status of being the most important holy day in the Jewish calendar.

Each of these events occurred at some point after the 597, 587, and 582 BCE expulsions, which together launched the first diaspora since the birth of fully monotheistic Judaism (that having been created a few years earlier in Babylon in an expulsion that started in 604 BCE). As a result of the scattering of the Jews (some went as far west as Morocco, and others as far east as India), not all Jews even knew about events like Hanukkah, which occurred in 150 BCE (heck, the first Jews to arrive in Italy did so in 200 BCE), so celebrating Hanukkah has not been nearly as long a tradition for many Jewish communities around the world as it has been for others.

25 Kislev - 2, 3 Tevet - The story of Hanukkah is preserved in the books of the First and Second Maccabees. These books are not part of the modern Tanakh; they are considered apocryphal books instead.[note 2] The miracle of the one-day supply of oil miraculously lasting eight days is first described in the Talmud. Long story short, Greeks conquer Israel and many Jews become Hellenized. Judah Maccabe leads a revolt against the Hellenized Jews. No. Scratch that. Let's say he leads a revolt against the Greeks and kicks ass. However, the temple only had enough kosher oil for one day's worth of flames, and it'd be eight days before more kosher oil could be made, but the oil lasted the whole eight days. No one noticed if there were seven days of non kosher oil missing during this time.

The tradition of giving presents on Hanukkah is 20th century American invention.[5]

15 Shevat — Tu Bishvat is the new year for trees. According to the Mishnah, it marks the day from which fruit tithes are counted each year, and marks the time-point from which the Biblical prohibition on eating the first three years of fruit[note 3] and the requirement to bring the fourth year fruit to the Temple in Jerusalem were counted. In modern times, it is celebrated by eating various fruits and nuts associated with the Land of Israel, and by planting new trees.

See the main article on this topic: Purim

14 Adar (14 Adar 2 leap year) — Purim commemorates the events that took place in the Book of Esther. It is celebrated by reading or acting out the story of Esther, by dressing up in costume, by making disparaging noises at every mention of Haman (the antagonist)'s name, by giving charity to someone who is poor, by eating the Purim meal and by getting absolutely smashed. This is by far more fun than Hanukkah. Note that in Jerusalem, Purim is celebrated one day later than in the rest of the world, on 15 Adar (or 15 Adar 2 in a leap year) and is formally known Shushan Purim.

Fast holiday, commemorates the destruction of the First and Second Temples in Jerusalem by the Romans, which according to tradition happened on the same day in the Hebrew Calendar, 9 Av, as well as three other tragedies (the revolt of the spies in Numbers 13-14, the putting down of the Bar Kochba revolt, and the plowing of the site of the Second Temple following its earlier destruction.) Many Jews also use the holiday to commemorate more recent calamities which occurred on or around 9 Av, such as the Jews' expulsion from England, France, and Spain, the formal approval of the Final Solution, and the mass deportation of Jews from the Warsaw Ghetto to Treblinka. The dates for many of these more recent events were deliberately chosen by their perpetrators to be on or around Tisha B'Av, presumably in a further attempt to spite the Jews. There is speculation that the AMIA bombing,

which occurred on 18 July 1994/10 Av 5754 and targeted a Jewish Community Center in Buenos Aires, was also deliberately planned to coincide with the holiday.

In the 20th century, most Jews added three holidays to their liturgical calendar. While several of these are technically Israeli holidays, many Jewish groups have embraced them as well.

Probably most literally translated as Day of the Holocaust - Shoah is an ancient Hebrew word meaning total and utter destruction but refers to the Holocaust in Modern Hebrew - it is also known in English as Holocaust Remembrance Day. It is observed on the Hebrew calendar's anniversary of the Warsaw Ghetto Uprising. In Israel air raid sirens are sounded and people are expected to come to a standstill to mark a national moment of silence in honor of the victims.

The Israeli equivalent to Memorial Day, except without the grilling and three day weekend, and with things that actually honor their soldiers.

Israeli independence day, this celebrates the foundation of the modern state of Israel. It takes place the day after Yom HaZikaron (to remember, that the foundation and continued existence of the state was and is payed with the blood of its soldiers).

Honors, from the Israeli perspective, the re-unification of Jerusalem after the end of the Six-Day War.