From RationalWiki
(Redirected from Futurama)
Jump to navigation Jump to search 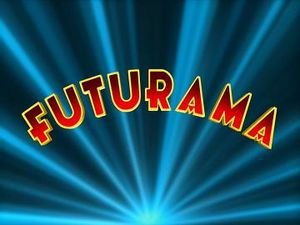 I'm gonna get 24th century on his ass.

Futurama is an animated comedy sitcom created by Matt Groening (the mastermind behind The Simpsons) and writer David X. Cohen (the chief nerd in The Simpsons writing room), following the life of Phillip J. Fry, a pizza delivery boy accidentally frozen on New Year's Eve in 1999. He wakes up 1000 years into the future, shocked to see a retro-futuristic New New York, and finds a job at Planet Express, an interplanetary delivery company (just without the pizza).

Groening has said that the 31st century setting has given him "a lot of leeway" on the show's creative process. And as such, Futurama has set the Guinness World Record for "Current Most Critically Acclaimed Animated Series."[1] It is also the only television series to feature its own mathematical theorem. 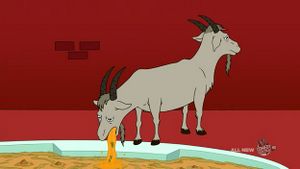 As with most animated comedy today, Futurama parodies pop culture to supplement its main plot. However, it is especially notable for giving viewers constant nerdgasms, poking fun at:

Entire episodes have been devoted to topics such as feminism ("Amazon Women in the Mood," and eco-feminism in Into the Wild Green Yonder), environmentalism ("A Big Piece of Garbage," "The Problem with Popplers," "The Birdbot of Ice-Catraz"), global warming ("Crimes of the Hot", featuring Al Gore), gay marriage ("Proposition Infinity"), the Trekkie phenomenon ("Where No Fan Has Gone Before"), intelligent design ("A Clockwork Origin"), the birther movement ("Decision 3012"), parallel universes ("The Farnsworth Parabox"), time travel and its resulting paradoxes ("The Late Philip J. Fry", "Time Keeps on Slippin'," "Roswell that Ends Well," Bender's Big Score, etc.), Möbius strips ("Möbius Dick"), and brilliant philosophical tales on God's existence ("Godfellas"), politics ("A Head in the Polls"), and war ("War is the H-Word").

Many in Futurama's production staff have top-notch academic credentials (Cohen, in particular, has a BSc in physics and a MS in computer science), while intellectuals like MC Hawking make frequent guest appearances.

In 2003, the brainless drones at Fox cancelled the series after only four seasons, complaining about poor ratings (in reality, Mr. News of the World's kiddies were playing around with the timeslots, making it difficult to see any of the new episodes anyway. This is also why Family Guy had poor ratings.) Reruns were played on Cartoon Network's Adult Swim block while the show's online fanbase continued to spike, and in 2006, Comedy Central announced the production of four straight-to-DVD fil-Shut up and take my money!

By June 2010, Futurama was beginning its 6th season and second official run on the new network. Critics were mixed to generally positive, praising specific episodes while comparing others to the quality of Season 1.[5] However, in 2013 it was placed on the chopping block yet again. With an even larger cult following and the cast and crew willing to stay on for as long as biologically possible, who knows where it will go next?

Futurama has been known to cause fully grown men to cry in the following episodes (ordered by date of airing):

RationalWiki suggests keeping a box of tissues nearby. We are not kidding.