From RationalWiki
(Redirected from Twilight)
Jump to: navigation, search

The taming of the Sue[edit]

Critics have accused the Twilight series of sending a blatant anti-feminist message. Bella has been perceived as being a weak character whose only defined personality traits are her extreme clumsiness (except when she's being "very graceful") and high level of maturity (except when she speaks, or acts),[2] and whose hobbies, interests, and goals mainly revolve around the males in her life: cooking and cleaning for her father and pining after the impossibly perfect Edward Cullen.[3][4]

Edward's relationship with Bella has been seen as having abusive overtones.[3][5] He exhibits creepy, stalker-ish behavior like sneaking into Bella's room to watch her sleep without her permission, and possessive, controlling behavior like disabling her car so she can't go see any of her friends (namely his romantic rival/secret lover Jacob Black), not to mention that she is lusting after a significantly older man.

Breaking Dawn, the final "book" in the Twilight series, could be described as a 750-page pro-life, pro-abstinence-until-marriage allegory, with 18-year-old Bella unintentionally getting pregnant on her honeymoon (how dare she have guilt-free sex after marriage?), then declining to have an abortion even though the hybrid vampire-human fetus comes to full term in a matter of weeks and almost kills her with its rib-shattering kicks.[6] Initially, Edward objects to Bella's apparent death wish and urges her to terminate the pregnancy, but then Edward discovers he can read the child's mind and upon touching Bella's stomach, while the child was still in the womb, he is able to read the thoughts using his mind reading ability from the soon to be named "Renesmee", and realizes that the child is not a demon as he earlier claimed, but a fully sapient being capable of emotion and feeling. After Edward reads the thoughts of Renesmee, he realizes she likes to hear the sound of her parents' voices and loves them very much. This event significantly changes Edward's outlook on the child and is soon on Bella's side in terms of keeping the child.

Meyer responded to the charge that Bella is an "anti-feminist heroine" with arguments that at face value seem pro-choice:

Carrying an unplanned teenage pregnancy or a high-risk pregnancy to term are both valid choices within the pro-choice viewpoint (that is, after all, the very definition of choice). However, Breaking Dawn does not feature an average unplanned teenage pregnancy or an average high-risk pregnancy, and it is this portrayal that can be considered problematic. The extreme life-or-death nature of Bella's pregnancy arguably places her and her decision not to have an abortion on a high moral pedestal. Thus, she may not be depicted as simply exercising her right to choose, but as making a heroic sacrifice and doing something righteous, with the implicit message therein being, "no matter how dangerous it gets, abortion is never the solution." However, whether this really is pro-life rhetoric in pro-choice clothing is pretty much personal opinion. At least, it isn't the most objectionable part of the "book".

It's even arguable that Bella gets to enjoy her apparent pro-life martyrdom without actually having to experience any lasting consequences. When she's literally on the brink of death, Edward saves her by turning her into a vampire, imbuing her with magic vampire healing powers that conveniently un-break her spine and close her emergency fangsarean section.[note 2] Moreover, she'll never have to endure the typical hardships associated with teen motherhood, as the Cullens are insanely wealthy (owning, for instance, a private tropical island, on which Bella got knocked up).

The birth scene in Part 1 of the two-part Breaking Dawn "film" adaptation is reported to have caused several viewers to suffer seizures due to "black, red, and white flashing lights."[8] It is also possible that Mormonism is extremely neurotoxic, acting as a convulsant poison similar to Water Hemlock.

Meyer is a member of the Church of Jesus Christ of Latter-day Saints (LDS). This has led to the perception of multiple Mormon elements and themes within the Twilight series:

Meyer has said she is a "huge fan" of Orson Scott Card.[15] It is perhaps telling that, of all the sci-fi and fantasy writers, she singled out one of the only other Mormons in the room.

In the first three Twilight "books", Bella is torn between bestiality and necrophilia her two suitors Edward and Jacob, which caused the Twilight fandom to be split between "Team Jacob" and "Team Edward." After having Bella and Edward tie the knot in the last "book", she threw an unbelievably bizarre consolation prize to members of "Team Jacob" by pairing off the oddly hairless werewolf with the chestburster literally seconds after she is born.[16] In the Twilight universe, male werewolves involuntarily form lifelong magical bonds with their soulmates (an event known as "imprinting"),[16] and evidently aren't put off by such traits as wailing, lack of bladder control, and a still-attached umbilical cord.

Meyer apparently had trouble understanding why reaction to Jacob falling in love with a newborn baby included words like "creepy" and "pedophilic." Her response? "Yeah, people get a little weird about it, and think there's something wrong there."[17] According to her, there's nothing amiss about the situation, as pedowolf's feelings for Renesmee will remain those of a "very dedicated father or older brother" until she grows up and "needs something else."[17]

Critics have contended that an adult man taking the role of a trusted guardian in a child's life in the expectation that his relationship with said child will later develop into something sexual is akin to child-grooming.[18] Jacob's imprinting, viewed in this light, means that Renesmee's future choices are being made for her. The trust she places in Jacob, as well as in her family, who fully expect her to live happily ever after with her predestined mate, will make it difficult, if not impossible, for her to refuse him.[19]

To fix this, Meyer made it out that Renesmee, though still a child, has the maturity and intelligence of an adult, is growing up super fast and will stop once she reaches the age of 17. The big problem with this is that it makes Renesmee into the abuser in the relationship. Yes, RENESMEE. See, throughout her interactions with Jacob, she is constantly manipulating him and acting as a normal child, basically getting her way the whole time, with Jacob unable to say no because of that whole imprinting nonsense, which he actually hated until it happened to him. Basically, Renesmee has her entire life gift wrapped for her, with her own ultra hot hubby to boot, who will do whatever she wants, no matter what because he is unable to say no.

Meyer is just that bad a writer.

Despite all of the above, Meyer seems to believe that there are situations where relativism applies and others where absolutism applies. For example, premarital sex and abortion are always evil but people should be free to choose whether or not to commit murder. Indeed, Carlisle, a vampire presented as compassionate and saintly, repeatedly stresses that he respects the freedom of other vampires to kill and eat humans. After all, he believes in free choice. Edward, the obnoxious stalker who used to captain the Hufflepuff Quidditch team (a big step downward from his beginnings), states that Benjamin, a being who goes out to kill and eat humans every weekend, has "always had a good moral compass." 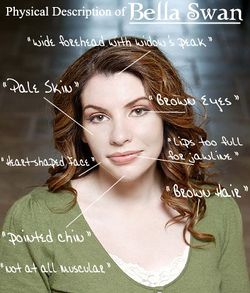 The Twilight series is, quite literally, Meyer's sexual fantasies set down on paper. Yes, really, Meyer confessed the idea of an "average girl" connecting with a sparkly, blood-sucking Adonis "came to her in a dream".[20] The wish fulfillment factor of the Twilight series most certainly isn't helped by the fact that it is "written" first-person from Bella's point of view (with the exception of "Book" Two of Breaking Dawn, which is "written" from Jacob's perspective). Very little physical description is given of Bella in the "books"; Meyer did this intentionally, ostensibly to allow readers to "more easily step into [Bella's] shoes."[21] This applies equally to the person responsible for writing the damn things. Meyer published a detailed physical description of Bella on her website,[21] which was apparently drawn largely from looking in the mirror (see right).

To up the creepiness factor by a trillion, Meyer has stated that she loved her vampire-ravaged Mary Sue heroine "like a daughter," and that this love inspired her to call the character Isabella, a name she had been "saving for [her] daughter, who had never shown up and was unlikely to put in an appearance" (Meyer has three sons).[20]

And let's not get started on how Mr. Meyer might feel about his wife pairing off her surrogate character with her fantasy dream man. Remember that many conservative Christians, including Mormons, consider fantasizing about or lusting after someone other than one's spouse to be "adultery of the mind" based on various Biblical passages.[22]

Even actor Robert Pattinson, who plays Edward in the "movies", has picked up on most of Bella and Edward's faults and is increasingly unsubtle about how bad it is.[note 4] Young Cedric Diggory, now Batman, managed to resuscitate his career:

Prepare to totally shift your perception of him:

Like all popular works of fiction, Meyer's Twilight series has attracted enough amateur Internet-based "writers" to fill Noah's Ark, with nearly 215,000 individual entries in fanfiction.net's Twilight category.[24] Some have even been praised as (allegedly) better than the original in all dimensions, particularly in terms of characterisation.[25][note 5]

The most infamous is E.L. James' BDSM-themed Fifty Shades of Grey.[26][27] It began as a Twilight fan-fiction entitled Master of the Universe, but following a hasty alteration of the characters' names for obvious legal reasons (the vacuous characterization remains, however), was published and inexplicably became a best-seller.[28] Meyer herself claims not to have read it, but seems supportive of James and her success.[29]

Oh yeah, the writing is really, really shit, as the quote above shows. What the fuck is an "inner goddess" supposed to mean?

Meyer is also the "author" of the science fiction novel The Host, an Animorphs ripoff she intends to be a trilogy. It reached #1 on the New York Times bestseller list in 2008 and was rated lukewarmly. The "movie" adaptation, on the other hand, was hated by everybody and flopped in theaters.[note 6]