Garbage in garbage out 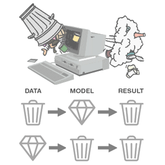 Garbage in, garbage out (GIGO) is a long-standing principle of computer programming and algorithm design. It means that it doesn't matter how good your logic is; if your input is bad, your output will be nonsense. In philosophical terms, your argument may be valid, but not sound.

Let's examine Pascal's wager as an example of how this applies to debate tactics:

A purely logical analysis of the statements as such suggests that the best option must necessarily be to believe in God. However, it can easily be argued that Pascal's premises were wrong. Pascal assumes that only one kind of faith (and therefore, one God) mattered. Pascal ignores the variety of human religious experiences, immediately invalidating the premises themselves, and therefore making the logical conclusion, garbage.

Common sources of garbage input include cherry-picked or elided data, disproved "common sense", small sample sizes (and anecdotes), and outright lies, as well as equivocation over definitions. Garbage outputs are occasionally correct, but if they got there by the wrong path, they aren't of very much use.

There are various statistical methods that can take a collection of unreliable data, and "correct" it (or at least come closer to the truth). There are a few restrictions to these methods, that's probably also worth mentioning here, as they form another problem: