Syllogisms are the basic tools of "term logic," also known as "traditional logic," "classical logic," or "Aristotelian logic." Term logic was created by Aristotle and was widely used until the creation of predicate logic in the late 19th century. Although it has fallen out of favor, it is still useful for understanding basic formal fallacies, and for understanding texts written before the rise of predicate logic. Another advantage is that it mostly uses regular syntax and language, allowing it to be understood more readily by the layperson, while predicate logic uses a more formal artificial language.

The basic building blocks of classical logic are "terms," "propositions," and "syllogisms."

Terms are words and phrases that mean something but are not necessarily true or false. Examples of terms include "men", "mortals", and "Socrates". These words represent an object or idea but cannot be said to be true or false in and of themselves. 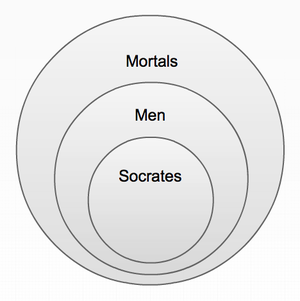 Syllogisms are simple deductive argument that consists of three propositions.

The most simple kind of syllogism consists of three "A" propositions (an AAA syllogism), taking the following form (with the symbol "∴" representing the word "therefore"):

Modes are the letter types of the three propositions in the syllogism. If a syllogism has three A statements, it's mode is AAA. In the Middle Ages, people memorised a poem to help remember all the modes, but it isn't necessary to. It goes like this:

Every vowel in the word tells you what the mode of the syllogism is. Words in italics are valid but weren't written into the poem at its time of conception because medieval logicians considered them weaker than the ones in the poem. For instance, AAI is valid, but making an A conclusion over an I conclusion (AAA vs AAI) is stronger; therefore, AAI was left out of the original poem.

Hundreds of different kinds of syllogisms can be arranged, but the vast majority of these are invalid. To be considered valid, a syllogism must follow seven basic rules.

As an example, we can check the following syllogism for validity: (the distributed and undistributed terms are marked for convenience)

Because the syllogism violated one of the rules, it is invalid.

However, a syllogism can be valid but unsound because one or both of the premises are false in reality. In the "Destiny of the Daleks" episode of Doctor Who the following syllogism is presented:

This argument is unsound because the first premise, "All elephants are pink", is false, but the argument is perfectly valid. It's important not to confuse validity with soundness. Note that this argument also isn't in standard logical form.

Invalid syllogisms or syllogistic fallacies are logical fallacies in which categorical syllogisms are used incorrectly.

A polysyllogism (or complex syllogism) is a longer argument composed of several categorical syllogisms or enthymemes. Most arguments used in rhetoric or conversation can be analyzed as polysyllogisms. Consider the following argument:

This argument is actually composed of two categorical syllogisms, with the conclusion of the first making up the first premise of the second:

By breaking a polysyllogism into its composite parts, one can easily test the validity of each different syllogism in these complex arguments.

A hypothetical syllogism takes the form:

We can use shorthand, with arrows representing the logical relationship:

The hypothetical therefore takes essentially the same form as the AAA syllogism we analyzed with Venn Diagrams earlier: If A=B, and B=C, then A=C. The difference is that a hypothetical syllogism qualifies the statements with a conditional. It does not necessarily state that the premises are true, only that there is a logical relationship if they are true. Replacing the notation with actual terms gives us the following example:

Either P or Q.
Not P.
Therefore Q.

Using shorthand (with "∨" representing the "either-or" relationship and "¬" negating the truth of a premise) it becomes:

It is important to note that the second premise should negate a premise, and not affirm it. Because of the ambiguous nature of the disjunctive relationship, in some logical problems both premises can be considered true. Thus, affirming one of the premises does not necessarily exclude the other premise; however, since the disjunctive relationship does imply at least one of the premises must be true, negating one premise will guarantee the truth of the other premise. Using ordinary language, the disjunctive syllogism would look like this: