The Garra rufa fish, or "doctor fish", originates in the river basins of the Northern and Central Middle East, mainly in Turkey, Syria, Iraq and Iran. This fish is famous for its ability to eat dead or diseased human skin while leaving healthy skin untouched. A recent fad for "fish pedicures" has sprung up, initially in health and beauty resorts, but soon spreading to shopping malls and salons, where you can pay to sit for a few minutes with your feet immersed in tanks full of the little buggers. Depending on the sub-species, current appetite, and size of the fish, the resulting experience ranges from barely perceptible touches to a series of painless but significant nips. 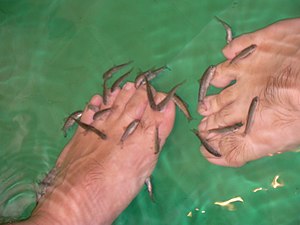 There seems to be little doubt that the doctor fish performs its skin-eating function well, and a small retrospective study showed it to have positive results in the treatment of the skin condition psoriasis when combined with ultraviolet (UV) therapy.[1] While being cautiously optimistic, the authors of the study recommended that it be repeated with a control group and also considered other possible reasons for the improvement. Note that UV radiation can cause cancer, so UV therapy should only be used under a medical doctor's supervision.

However, commercial high-street vendors of the treatment make additional claims about the action of the fish and there are also some questions about hygiene. While eating dead human skin the Garra rufa is claimed to release an enzyme which has a "vitalising effect on the new to grow (sic) skin."[2] Not only this, but it is also claimed that "in addition to renewing the skin and accelerat[ing] blood circulation, [the] Garra rufa fish also will stimulate acupuncture points that would create a more relaxed nervous system." [3]

Many proponents and vendors of Garra rufa therapy claim that the fish produce dithranol, an enzyme that is often used in the treatment of psoriasis.[4] However, studies proving this are not cited, and others have rejected this assertion.[5] More likely, it just releases fish poo. 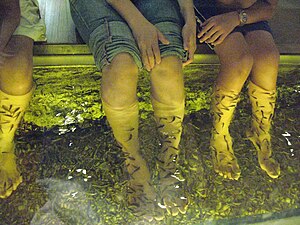 One of the potential issues surrounding the fish is that of hygiene. People visiting the fish for therapy may have transmittable skin diseases. The possibility exists that such diseases may be transmitted either via the water in which the fish are kept or via the fish themselves. Concerns about the possible spread of HIV and hepatitis have been raised, although there seems to be no evidence of significant risk.

One woman's toenails stopped growing and fell off after a Garra rufa session.[6] The mechanism that cause the toenail loss was unclear but other possible causes had been ruled out.[6][7]

It's also probably an act of animal abuse to force little fish to share space with your smelly feet. But it's still not as bad as gerbiling, betta fish battling or cock fighting.

The practice has been banned in at least 14 US States, as regulations require that cosmetology tools either have to be sanitized, or discarded after use.[8] As the fish are rather expensive to be thrown away (not to mention how animal rights activists would go ape-shit over this) and definitely won't survive any form of sterilisation process, the odds of them ever being brought into compliance with these particular regulations are slim.