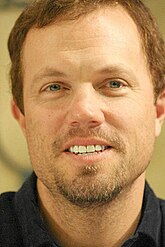 Adam Baldwin is an American actor and blogger, perhaps best known for playing Animal Mother in Full Metal Jacket and Jayne Cobb on Joss Whedon's cult hit Firefly. A distant relation to the Baldwin brothers Alec Baldwin, Daniel Baldwin, Stephen Baldwin, and William Baldwin; they share common Baldwin ancestry going back to the 1600s in England. He's a libertarian and a conspiracy loon, but we repeat ourselves. Baldwin's Twitter feed is just a giant trash bin of crazy; his Firefly castmate Morena Baccarin actually unfriended him over the political stuff at one point. Good actor though.

Baldwin tweeted that he has been registered with the Republican Party since age 18.[4] In an interview, he described himself as a "small government, conservative libertarian."[5] He has contributed blog posts semi-regularly to Andrew Breitbart's site Big Hollywood (now merged into Breitbart) since 2009.[6]

Baldwin believes the Obama Administration conspired against the general public. One Beck-esque Twitter post said "What hard evidence is there that Obama doesn't want Ebola in America?"[7]

Baldwin is a climate change "skeptic." In 2010, he published a piece condemning "the apocalyptic religion of environmentalism; a self-loathing, anti-capitalist, anti-Western-civilization political haven for deracinated communists, anarchists and their useful idiots after the fall of the Bolshevik utopia."[8] Granted, the piece was prompted by a gory ad for the climate change action campaign 10:10, which was the subject of widespread controversy.[9] But the overall pompous and cranky tone of Baldwin's piece did little to help his case on the offensiveness of the ad.

In August 2014, Baldwin tweeted a link to a YouTube video dealing with the so-called "Quinnspiracy," including the hashtag "#GamerGate."[10] This gave a name to the then-emerging campaign of targeted harassment against prominent women in the video game community.

In an interview with Every Joe, Baldwin explained that while he had "no intention of creating a hashtag movement or anything like that," the "mantle" had been taken up by people who "have been experiencing social justice warfare, and they’re sick of it, and they’re speaking up."[11] He identified with the Gamergaters' portrayal of their campaign as a call for "ethics" in game journalism, stating, "any sunlight shed on journalistic ethics is positive."[11]

Baldwin continued to tweet about Gamergate as the situation intensified.[12] After Brianna Wu, a game developer, revealed that threats against her and her family had prompted her to go into hiding on October 10, Baldwin tweeted that there were "deceptions" in her account, linking to a YouTube video by Sargon of Akkad.[13] On October 15, comedian Seth Rogen tweeted Baldwin, urging him to "please stop supporting this stupid cause."[14] Baldwin replied that "#Gamergate supports itself and has good arguments on its own," linking to a pro-Gamergate piece in Reason magazine.[14]

Joss Whedon remarked in an April 2015 interview that Baldwin "sweetly begged" him not to vaccinate his children and even gave him several books on the subject.[15]