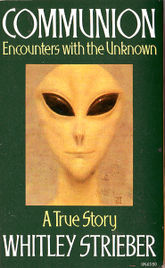 Gray aliens or grays are a race of alleged extraterrestrials common in the folklore of ufology. In recent decades grays have become ubiquitous in popular culture, and are probably the single most widely-recognized visualisation of an alien lifeform.

Grays are particularly popular in the USA, and to a lesser extent other English-speaking countries. In other parts of the world, such as Latin America, ET sightings often take a different guise. However, with globalisation, grays have begun to spread.

Grays tend to vary from account to account, but depictions usually contain most of the following characteristics: gray skin; a bulbous head; a lack of hair; and large, black, almond-shaped eyes, with the nose, mouth, ears and sex organs rudimentary or absent. Grays are often, but not always, naked; their stature and overall demeanor tends to vary, with some depicted as tall and graceful, and others as squat and dwarfish. Most accounts describe them as small, about the size of a nine year old human child.

Although the name of the beings refers to their gray skin, this attribute is not found in all depictions. Is it not uncommon for grays to be portrayed with the pinkish-yellow skin of a light-skinned human, while more comedic depictions of grays often give them green skin, a throwback to the traditional image of the "little green man".

According to David Icke, they come from the Andromeda Galaxy[1]. They must be really bored to come here, with so many hundreds of billions of planets to visit (very likely) just in their galaxy.

Although not as aggressive as reptilians in UFO-lore, grays are the sex pests of the supposed alien world. They don't much care for contact and platitudes about war and environmentalism in the good old Pleiadian way, but prefer abduction, usually when the victim is tucked up in bed. Their interests are said to include fiddling with genitalia, and lodging dildo-like objects up people's anuses (non-consensually).[note 1] They are also said to be partial to the nether regions of cattle and other livestock, which they remove by laser.

In other words, they don't come in peace so much as for a literal "piece of ass". This is rather strange, as they are commonly depicted as having no discernible genitals themselves.

Development of the gray image[edit] 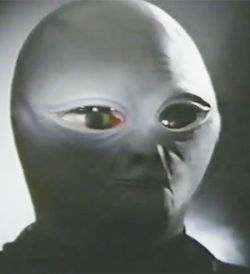 Amongst the possible ancestors of the grays in the annals of alleged alien sightings are the two green-skinned beings that Professor R.L. Johannis claimed to have seen in August 14, 1947 - although it is important to note that the earliest known documentation of this incident is from 1964. The creatures described by Johannis had green skin, perfectly round eyes and caps which made it unclear as to whether or not they had hair, but the large heads, blank, bulging eyes and squat, skinny frames clearly suggest the gray image.

The Roswell incident from shortly beforehand has since become firmly entangled with the image of the gray - indeed, some people refer to grays as "Roswell aliens". This connection appears to date from 1950, when Ray L. Dimmick reportedly claimed to have seen the inhabitant of the Roswell saucer, a man of about 25 inches tall with a disproportionately large head (he later denied seeing it and said that he'd been misquoted). Shortly after Dimmick's story was first reported, the German paper Wiesbadener Tagblatt ran an April fool's joke involving a faked photo of two men in military uniforms alongside a small, bulbous-headed alien. The UFO magazine Magonia has cited this as the first visual portrayal of a gray, but stresses that it is unlikely to have been a major influence on the American public's imagination as it appears to have been unknown in the US until it was reprinted in a 1980 book, The Roswell Incident.[2]

The next key stage in the development of the gray appears to have been the alleged alien abduction of Betty and Barney Hill; this supposedly occured in 1961, although the Hills did not begin giving details of their captors until they began undergoing hypnosis in 1963. Their account was self-contradictory - for example, Barney mentioned one of the aliens grinning at him, but later claimed that none of them had mouths - but a general picture emerged of bald creatures with rudimentary facial features. In 1967 artist David Baker collaborated with Barney to create some images of the aliens; the resulting pictures clearly depict the popular image of the gray, with the notable exception of the eyes. Instead of being large and opaque, the eyes of the Hill aliens are narrow, with visible pupils, and wrap around to the sides of the head. Skeptics have noted that the Hills' aliens bear a noticable resemblence to the "Bifrost", a fictional alien from an episode of The Outer Limits that aired during the period that the Hills were undergoing hypnosis;[3] indeed, it could be argued that the Hill aliens mark a transitional phase between the Outer Limits alien (which is rather obviously a man in a mask) and the modern image of the gray.

In 1975 NBC aired a TV movie about the Hills, entitled The UFO Incident. In this portrayal, the aliens were, unmistakably, ancestors of the grays of popular imagination today, complete with dark, almond-shaped eyes - albeit a little smaller than in more recent depictions. Two years later Steven Spielberg's blockbuster Close Encounters of the Third Kind was released; this film went for a similar look with its childlike aliens, only with more convincing special effects.

1987 saw the publication of Whitley Strieber's book Communion, an account of his alleged alien encounter two years previously. The cover depicted a fully-formed example of a gray: the enormous, slanted black eyes are now firmly in place. The book was filmed in 1989.

The image of the gray appears to have become cemented in popular culture in the nineties. The X-Files, which began in 1993, used grays,[4] and by the end of the decade grays were familiar enough to be parodied in the first episode of South Park, which aired in 1997.[5] 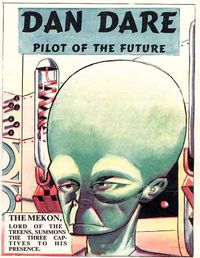 Detail from a November 1950 instalment of the British comic strip Dan Dare: Pilot of the Future showing the recurring antagonist, William Hague

Years before the iconic image of the gray began to emerge in alleged alien encounters, most of its defining characteristics were already common tropes in science fiction illustration. The large head implies a large brain, and is therefore a shorthand for an advanced species. Depicting an alien as hairless removes the most obvious mammalian characteristic - a useful way of suggesting another species even when maintaining a humanoid morphology. Large-eyed beings were a common sight on the covers of science fiction magazines, with fans speaking derisively of "bug-eyed monsters" as early as 1939[6] - although the distinctive almond-shaped eyes of the gray seem a relatively recent development.

Alvin Lawson, who theorized that alien abduction experiences are actually memories of being born, pointed to similarities between bulbous-headed aliens such as grays and the human foetus.[7] He suggested that these aliens derive from an archetypical image of an embryo.[8] Frederick V. Malmstrom has argued that a newborn baby, with its limited vision, would see adults as something similar to a gray, and that perceived encounters with aliens during adulthood could be derived from this memory.[9]

Many societies have traditions about elves, fairies, dwarves, kobolds etc, which echo modern grays. These were small, humanoid, with incredible powers and would wander around at night, especially in remote places. They were sometimes said to take an interest in livestock, milking cows or damaging them (this was one way diseases were explained, along with witchcraft). Abduction by fairies is a centuries old tradition in Europe, and it is possible that grays represent a modern outgrowth of this idea, with the fairies being replaced with extraterrestrials (which are more plausible to many people's mindset nowadays.) Two notable fairy abductees from western literature are Thomas the Rhymer and Rip van Winkle. The latter experienced a significant amount of missing time.

Another odd feature of grays is that they seem to represent exaggerated stereotypes of East Asians, particularly Chinese - e.g. inscrutability, lack of individualism, small noses, and unusual eyes etc. Grayness also represents a dullness, and lack of individualism, which runs counter to the supposed American way. This is in line with the supposed "Yellow Peril" scare, which still exists in the wake of the rise of China and Maoism.

See the main article on this topic: Paranoia

In certain respects, grays tap into people's atavistic inner fears as well as some more postmodern ones. More traditional ones include: