From RationalWiki
(Redirected from Gay agenda)
Jump to: navigation, search 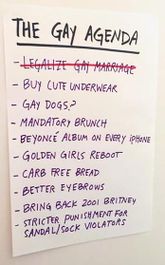 The homosexual agenda (sometimes gay agenda) is a homophobic conspiracy theory originally created by the Religious Right in the United States, which alleges that homosexuals are trying to infiltrate and corrupt all of our precious bodily fluids every facet of traditional American culture, most notably: family values. The primary purpose of this claim is to give the LGBT rights movement a shady, vicious and fictional purpose (usually rooted in anti-Christianity, anti-Islam[note 1] and/or pro-communist conspiracies) and thus keep it dehumanized, because the faceless agenda is much easier to convince people to rally against than the individuals seeking basic civil rights themselves.

According to The Christian Post, the homosexual agenda consists of:[4]

Use of this term may indicate paranoia, persecution complex and an obsession with everything gay.

Everyone's favorite nutjob, Scott Lively, created a video trying to reclaim the rainbow as a Christian symbol, in a delightful little ditty, The Rainbow Belongs to God, which goes: "Who is the one that dares to defy God's covenant truth with lies?"[note 2] Answer: The Gays™ and the gay agenda.

Some modern and fundamentalist conservative movements, particularly in America, believe that public schools are "indoctrinating" students to promote, convert to, or generally accept homosexuality as "normal".[7] This view has become more prominent towards the end of the 20th century following the sexual revolution of the 1960s, after which homosexuals became more accepted by mainstream society. However, the evidence to support the claim that homosexuals are trying to convert students (let alone the existence of an ideological justification for doing so) is scarce non-existent. This idea is largely a result of the growing acceptance towards homosexuality by mainstream society, as well as schools teaching about homosexuality. However, the teaching about homosexuality has been interpreted by anti-LGBT groups as an attempt to convert and indoctrinate, rather than educate.

While there has been a noticeable lack of teaching gayness in schools, there has been a statistical spike in scared, closeted LGBTQ kids committing suicide, to the point where former US President Barack Obama made a YouTube video about it.[8] Evangelicals responded by saying their kids were bullied first by the kid "being gay" at school. 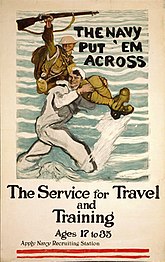 Homosexual recruitment is the working title of a conspiratorial moral panic spun into existence by some rather creepy wingnuts.[note 4] It posits that there is a concerted effort by the gay population to place large numbers of gay teachers in schools. Then, drawing from their idea that homosexual tendencies are acquired in youth, it then goes on to claim that said gay teachers are trying to seduce children and turn them gay. Among proponents of the theory, homosexual recruitment is typically considered part (and likewise indicative) of a larger homosexual agenda. Various wingnuts have also found homosexual recruitment lurking in a number of other areas as well. Pat Robertson, for example, "discovered" that feminism is actually a front for turning women into lesbians.[10] (along with socialists, pagans, and other sundry bogeymen)

It also draws on pseudo-psychological quackery regarding pedophilia. This form of bullshit posits the notion that gay men are all pedophiles and molest little boys. They allegedly practice this molestation because they know that such abuse will turn the children gay later in life; thus, the gay man "recruits" because he cannot reproduce.[note 5] For this reason, fundamentalist wingnuts often support quack psychotherapies such as repressed or recovered memory therapy to find "proof" of child sexual abuse in gay people, and reparative therapy to "cure the gay".

in 1978, a proposition to ban not only gays, but also anyone who supported gay rights, from working in California public schools. However, even Ronald Reagan went against this measure,[11] and it was defeated at the polls. Britain's infamous Section 28

law was also passed into law, partly out of fear of gay "recruitment".[12]

In 2013, the Russian government unanimously passed a law banning promotion of "homosexual behaviour among minors",[13] which was met with protests in Russia and abroad. Proponents of this law try to claim that it is a complete coincidence that its passage was accompanied by a large spike in violence against Russia's LGBT population.

An earlier iteration of this conspiracy theory was referred to as "Homintern," a play on the Soviet Comintern. This theory posited that gays controlled the arts and media and used them for the purposes of propagandizing and recruitment.[14] More recently, the term "Sexual Bolshevism" has been preferred by Metapedians (probably because "Homintern" was too subtle), although this phrase has its history in Weimar Germany.