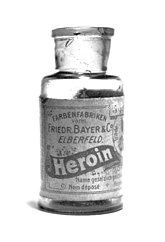 From the makers of Aspirin™!

Heroin (diamorphine or technically, diacetylmorphine) is an alkaloid opiate, created by acetylation of the two alcohol groups with acetic anhydride in the morphine compound in opium. It was originally invented at St Mary's Medical School in London in the late 19th century, and was subsequently resynthesised 23 years later by Bayer and marketed as a "non-addictive" substitute for morphine, which at the time was a popular recreational drug.[2]

Heroin is a long-lasting painkiller that will take away pain you never even knew you had. Heroin is notoriously addictive - almost as addictive as cigarettes! - and is known to create a high tolerance amongst regular users. Withdrawal from heroin is one of the worst withdrawal experiences, many times requiring intervention and counseling, though withdrawal is not physically dangerous as is the case with alcohol and benzodiazepines which can be fatal if not properly monitored. Collapsed veins and decreased liver function are other side effects of the drug due to frequent needle use and the drug's high potency, respectively. Due to the constipating effects of opiate drugs, you will also crap like a race horse on Ex-lax when it wears off. At any rate, it's probably the most depressing drug ever to make its way in your neighborhood.

In ascending order of potency, as the poppy is further refined it is turned into:

As these increase in the potency of both their painkilling effect and addictive qualities (with accompanying side-effects) a balance between is struck for medical use. Codeine is prescribed as a painkiller, while morphine is restricted for more serious cases and usually restricted to hospitals and paramedics. Heroin itself is used medicinally in the UK, for the same sorts of reasons as morphine, such as severe physical trauma, post-surgical pain, and chronic pain from terminal illnesses such as cancer. However in the USA, heroin is listed as a Schedule I drug, and despite its strong similarity to other legal opioid painkillers, it is not deemed to have any medical value.

Diamorphine is a prodrug, having very little affinity for the μ-opioid receptor due to the 3-hydroxy group being acetylated, and is metabolised into morphine, 6-Monoacetylmorphine (6MAM), and 3-Monoacetylmorphine (3MAM), the most potent of which is 6MAM.[3] 6MAM is only produced as a metabolite from heroin and is therefore used as a specific test in human drug tests for heroin abuse, as other opiates such as codeine are partially metabolized into morphine.[4] Heroin is far more potent than morphine as the acetylation of the two alcohol groups makes it far easier for the molecule to cross the blood-brain barrier, where it is subsequently converted into the active metabolites.

6MAM and morphine act primarily on the μ-opioid receptor, which is a g-protein coupled receptor which in turn inhibits adenylyl cyclase, having the knock-on effect of reducing intracellular cyclic AMP (cAMP). With chronic exposure, the cell will respond by producing more adenylyl cyclase, creating a tolerance, and marked withdrawal symptoms on heroin cessation due to massively increased intracellular cAMP levels.[5]. One of the symptoms of opioid withdrawl is piloerection (goosebumps) leading to pimply-looking skin and is where the term "cold turkey" is derived from.

The specific antidote to opioid poisoning is naloxone, a short acting (10-20 mins) opioid receptor antagonist which binds with high affinity to the μ-opioid receptor but lacks any efficacy to cause the receptor to activate the g-protein. As it is so short-acting, multiple doses are required to avoid the patient slipping back into opioid coma.[6] It is not, as depicted in certain movies, effective to inject someone directly in the heart with adrenaline who has suffered an overdose, as the primary problem caused by heroin overdose is paralysis of the diaphragm, causing respiratory depression and subsequent suffocation.[7] A longer acting opioid antagonist, naltrexone, is used to help ex-addicts to quit by blocking the effects of any future opioid abuse. Another common cause of death in heroin users is choking on one's vomit, which is the unfortunate result of three effects of opioids: vomiting, narcosis, and antitussion (suppression of the cough reflex).

Methadone, a synthetic opioid, is sometimes used in the treatment of heroin addiction. The thinking is that, since methadone operates on the same receptors as heroin, it curbs the craving for heroin without producing the same euphoric effect. Methadone also stays in the body for much longer than heroin - about 48 hours to heroin's 8. This makes tapering the dose downwards much more comfortable and manageable. The downside to this is that abruptly ceasing methadone use (going cold turkey) leads to terrible withdrawal symptoms which can last as long as several weeks.

Pure heroin is not actually all that damaging to your health, apart from being horribly addictive. The main hazard of present-day street heroin is (a) impurities (i.e., most of it) (b) unpredictable purity (leading to accidental overdoses) (c) most methods of actually getting it into the blood stream (i.e. using even clean needles can still eventually result in a collapsed vein) (d) the criminal subculture surrounding it.[8] But rest assured, government policies on illegal drugs are firmly evidence-based and sensible.[citation NOT needed]

Since about 2015, an alarming amount of street heroin is adulterated with fentanyl, a potent opioid used in extremely dilute quantities for pain management in cancer patients. Fentanyl is 30 to 50 times more potent than pure heroin. Fentanyl-laced heroin has been responsible for a growing number of deaths, and is a major part of the opioid crisis in North America. 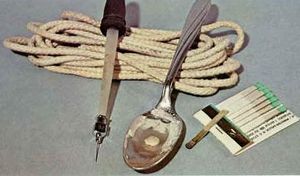 Actors need to know how to use these.

Heroin chic refers to a fashion trend that required being underweight, deathly pale, poorly groomed (i.e., messy hair), and wearing dark glasses to hide one's constricted pupils. It also led to movie actors needing to know how to convincingly "shoot up", much as actors in the forties had to know how to smoke cigarettes. Heroin chic was largely popularized in the 90s by movies such as Trainspotting and English model Kate Moss.

As with most drugs, heroin has plenty of slang terms that refer to it. Here are a few:

Heroin in popular culture and the arts[edit]

Numerous artists have sung the praises, or damnations, of heroin:[note 5][note 6]