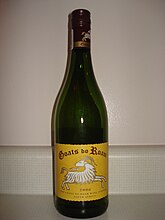 I detect a note of goat in this wine.

Wine is mankind's ancient and sacred beverage, made from fermented fruit, especially grapes.

There are countries, for example those bordering the Mediterranean Sea which have a sacramental worldview, which says that an infinite God comes to meet finite man using the things of creation: water, oil, bread, wine, the touch of a hand. People of those countries believe that all creation is good. They tend to be connected with the earth, with hard work, with simple pleasures. They appreciate sex as a gift of God not only for procreation but for physical and emotional joy. In those countries, wine is just another gift of the Creator to be accepted in moderation and with thanksgiving.

Then there are other countries, for example those in the north of Europe, which have almost a gnostic worldview, which says that all flesh and matter is weak and sinful, and only intellectual things are pure and godly. They hold that God meets man only in the mental realm, and approach the Bible as a set of doctrines which need to be properly decoded. They say man is saved by knowledge and assent to key doctrines. People in those countries tend to believe that Creation is fallen. They tend to be connected to business, to the power of investment capital, and they hold a man's financial success as a sign of his election (ironic given that their worldview holds material to be sinful). They accept sex as a necessary evil for the procreation of more tithe-paying foot soldiers for God. In those countries, wine is evil, based on their dictum that "if it feels good, it's sinful."

Then there are countries even further north in Europe where they believe that God meets man after the drinking of urine from reindeer which have been eating Fly Agaric mushrooms. Their attitude to wine is "Hey, have you tried growing grapes north of the Arctic Circle?". They generally prefer vodka.

Wine was probably invented about 7,000 years ago in Georgia,[1] a small, pleasantly temperate country in the Caucasus Mountains perhaps best known as the place Russia invaded while everyone was watching the 2008 Olympics. All told, wine is a much better contribution to humanity than the other famous thing to come out of Georgia.

It was a staple of ancient Greece, Persia and Rome because grapes were readily available (they knew perfectly well how to make beer--which was common in both Egypt and Mesopotamia, both of which all of those cultures had contact with/conquered--but mostly regarded it as the province of uncouth barbarians). Back then, wine went through fermentation but not the aging process that modern wineries utilize. The resultant beverage was both thicker and stronger. Drinking wine involved diluting the wine with water and pouring it into large carafes, to be poured by stewards into individual goblets.

It is said that the Greeks, when making important decisions, would discuss everything twice: once at night with wine, and once in the morning while sober. This brainstorming process allowed for all possibilities to be considered, even the crazy or impossible ones, but cooler heads and more reasonable ideas would (likely) prevail the next day.

Wine was regularly consumed in the stories of the Bible, most notably at the Last Supper, an event that spawned the quest for the Holy Grail as well as the concept of the Eucharist. The notion of the Eucharist is also allegorized by stories of vampires; the fact that Stephenie Meyer (of Twilight infamy

) is a Mormon (which forbids the consumption of alcohol) is an irony that most of her fans appear to have missed.

Despite the popularity of wine drinking in Biblical times, many Abrahamic religions (and, indeed, some eastern religions) forbid or discourage its consumption.

Wine is grown in many nations, with more nations joining the ranks of those willing to export their wine to other countries. Recent years have seen increased exports from South American countries as well as South Africa.

Until the 1970s, most vineyards around the world were family-owned, but with increases in demand more vineyards started to be conglomerated under corporate flags. Depending on the company, this can lead to an increase in quantity over quality--this is especially true in the case of perennial labels such as Ernest and Julio Gallo or Silver Oak. In other cases, increased distribution has led to increased demand for some labels.

Unlike the production of beer or aged liquors such as whiskey, tequila or rum, wine production is largely dependent on the weather as well as other climatological differences from year to year, as well as differences in geography and geology. Grapes grown in Santa Maria Valley, California may be of the exact same strain (or "clone") as grapes grown in Burgundy, France--but because of differences in soil, rainfall and average temperature, as well as microclimatic patterns specific to the region, subregion or even one side of a hill versus the other, the resulting "juices" can will be very, very different. As one might imagine, climate change is a major concern to growers and vintners around the world: you will find very few deniers among the wine-making populace.

The growing of wine grapes varies between vineyards, as different farmers have different philosophies or goals. Production farming is the most common, where grapes are grown for quantity. Sustainable farming has become more prevalent in recent years, especially in the United States, as concerns for continued success of any particular vineyard over time are more important for growers to maintain their livelihoods. Organic wines are also becoming more common among vineyards that own their own labels (the certification process is lengthy and expensive). There's also a level above organic, called biodynamic wines[2], which are holistic "Super-Organic" wines and combine aspects of astrology, specialized composting and good feelings; this also has his own certification process which is even more stringent. However skeptical you are of the woo that might go into biodynamic wines, the resulting product is usually quite delicious (if no different tasting then wines made without the biodynamic "benefits" you get from... tea made from special herbs composted in cow horns?) [3]

In addition to just wine, once the processes for distillation were discovered people of course tried this with wine. The end result is brandy, which ranges in flavor strength from borderline juice to absolute jet fuel (with plenty of fine tastes in between). The best known subset of brandy is cognac, which is sometimes incorrectly thought of as a distinct drink.

Throughout Europe, the geographical area where wine grapes are grown is generally held to be the wine's defining quality. Thus wines are primarily named for their regions (Chablis, Macon, Entre-Deux-Mers, Alto Adige, Alicante, e.g.) In France, wine labeling is tightly controlled -- some such penalty as tarring and feathering is imposed on anyone who labels a wine Chablis Premier Cru and makes it with any grape other than chardonnay, or grows it in any vineyard other than the 40 special terroirs that label is reserved for.

In the USA, consumers apparently don't care where their wine comes from as much as the grape variety. Wines are therefore primarily labeled that way. A bizarre exception is Chablis -- almost any restaurant in the entire USA will sell you something called Chablis that never came closer than 4,000 miles from that venerable viticultural region.

There's a certain logic to labeling by varietal, to be sure, but American drinkers who swear by it deprive themselves of some highly successful blends. An example is grenache (garnacha in Spain) — one of the most widely planted red grapes in the world. Coming very late to harvest, grenache tends to make a strong alcoholic wine, and is therefore commonly blended with other varieties such as cinsault or syrah. The result is labeled by its region (the generally excellent Châteauneuf du Pape would be the supreme example).

This is going to taste as good as Belgian abbey beer!

"Ripple" was a brand of inexpensive fortified wine, formerly made by the E & J Gallo Company of California, that achieved high popularity among American winos during the 1970s. It is remembered among other things for possibly inspiring the Grateful Dead song "Ripple"[4], and for being often mentioned on the 1970s era TV show Sanford & Son as Fred Sanford's[5] favorite tipple. Ripple lost market share and vanished from the U.S. wine market at some time in the 1980s; fortunately, similar Gallo wine products remain available, such as "Night Train Express" and "Thunderbird."[6] Thunderbird wine reportedly turns your tongue black, a phenomenon that craves closer scientific examination.[7][8]

Competing brands include the syrupy "Cisco"[9], which looks like a wine cooler, "Wild Irish Rose", and "MD 20/20", originally Mogen David, now Mad Dog. Britain boasts of the celebrated "Buckfast Tonic Wine," a Catholic monastic brand, brewed on behalf of the monks of Buckfast Abbey, that adds a bit of caffeine to the fortified wine for a bit of the old ultraviolence.[10] They also offer "Scotsmac", a mixture of wine and Scotch whisky, and therefore similar to the blend of claret and Scotch that kept Queen Victoria lit.

Wine fanciers have created an elaborate lexicon to describe the tastes they find or think they find in wines. There are some descriptors that have widely accepted meanings, such as "fruity" (i.e. grape flavored) or "oaky" (tasting of tannic acid from being aged in oak), but wines can also be "voluptuous" or "flabby", "blowzy" or "austere", "feminine", but apparently not masculine, "easy" and "fallen over."[11]

Of course, serious wine tasters don't drink it when tasting, which some would say sort of defeats the purpose.

Wine testing and awards has been proven to be bullshit based on blind taste tests. Awards are effectively handed out at random and experts are just bluffing.[12]

Every couple of years an article will inevitably appear in the popular press which purportedly shows a scientific basis for the consumption of moderate levels of wine being linked to positive health outcomes (e.g. reductions in heart disease, blood pressure and/or strokes[13]). This is not a recent phenomenon; in fact, the Greeks and Romans both believed that wine aided digestion, reduced body temperature, and was useful as a diuretic (they got this right; 200mL of ingested wine produces around 320mL of urine). The De re coquinaria, one of the only extant Roman cooking books, specifically prescribes wine to combat the harmful effects of lettuce on the body[14]; most modern-day gastronomists agree that lettuce must be countered with a liberal application of wine. So widespread was the belief that wine was beneficial for you that it wasn't studied until around the 19th century when doctors started to realise that alcoholism wasn't so flash hot for the liver.

When looked at in detail, studies into the health benefits of wine often emerge from organisations with a little vested interest in the topic, such as the (totally non-partisan) Australian Wine Research Institute.[15] While it is true that studies sometimes find that moderate levels of consumption lead to better health outcomes it must be noted that the popular perception of "moderate" consumption is often different than the medical view, and no, despite being a hilariously funny joke, those one-liter-capacity wine glasses are not a standard drink. In fact, a sizable portion of researchers now think that consuming less than 2 standard drinks a day may lead to elevated risk of cancer[16] (boo!). To make matters worse there is a growing belief that previous research showing health benefits for moderate consumption may have been flawed because:

It's enough to make you want to down a glass or two!