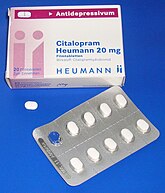 An antidepressant is medication aimed to treat mood disorders, which can be co-morbid with anxiety disorders. Antidepressants also have other off-label uses such as for generalized anxiety disorder, premature ejaculation, fibromyalgia, and diabetic neuropathy.[1] Their efficacy is well-documented.[2][3] The brain can get sick, just like any other body part, and can often improve with the right medication.

Despite this, various bastions of enlightenment — including acupuncturists[4] and the Church of Scientology[5] — are fighting against their use. After all, if you get better thanks to modern medicine, then why would you need to rely on pseudoscience?

The underlying theory behind antidepressant drugs is that clinical depression is due entirely to chemical imbalances in the brain - and so drugs artificially stimulating certain receptors and chemical production in the body can aid permanent treatment of depression. Reuptake inhibitors slow the brains ability to "recycle" certain chemicals in the brain, thus allowing more of the chemical to be available to be able to bind to the relevant receptor sites.[6] Antidepressants, even of different chemical and pharmacological classes have been shown to exert some of their effect by increasing levels of brain-derived neurotrophin factor, a protein that plays an important role in promoting neuroplasticity.[7]

Because the exact mechanism of antidepressants is poorly understood, some argue that they should not be prescribed. This idea disregards the fact that many drugs, even common ones like paracetamol or lithium carbonate, have unknown mechanisms of action.

Clinical psychology is often prescribed in tandem with anti-depressants. This way, any bad habits or thought distortions can be corrected, and the person can be taught constructive ways of handling any life problems that are causing them serious woe. The antidepressants handle the chemical problems and the therapy handles the rest of the problems.

There are many different types of antidepressants,[8] each aimed at working on different chemicals in the brain. Unfortunately, scientists haven't yet figured out a way to determine which chemical is imbalanced in someone's brain, so a person with depression may need to find the right medication using trial and error.

The most common chemical indicated and treated for depression being serotonin

("happy hormone"), it is common for doctors to prescribe an SSRI (selective serotonin reuptake inhibitors

). These medications are the most commonly prescribed due to their lower incidence of side effects, and are often the first type of antidepressant tried by general practitioners and psychiatrists.

The six current SSRIs are: 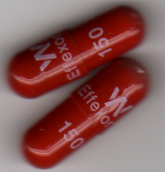 ), is also commonly indicated in depression. There are several different pharmacological compounds that work on both the serotonin and the norepinephrine systems in the brain. These are often used as a first and second line treatment.

There are a few SNRIs:

work on the chemical serotonin in a different way than SSRIs.

These work only on Norepinephrine.

The three NRIs are:

Not to be confused with tricyclic antidepressants.

The tetracyclic antidepressants are:

There are other types of uncommonly prescribed antidepressants that are generally older than the above, or have side effects or require dietary restrictions that preclude them being prescribed widely. These include MAOIs (monoamine oxidase inhibitors

, which require avoidance of tyramine

Occasionally, psychiatrists add adjunct (additional) drugs to a patient's drug regimen, if they are not responding completely or at all to their medications. This can take the form of atypical antipsychotics,[9] stimulants[10] (such as Adderall), and mood stabilizers (such as lithium).[11]

A small study conducted in 2002 found that patients had the same reaction to both fluoxetine (Prozac) and a placebo.[12] A larger 2008 study published in the Public Library of Science Medicine also tested Prozac, as well as paroxetine (Seroxat), venlafaxine (Effexor) and nefazodone (Serzone), and found that "the overall effect of new-generation antidepressant medication is below recommended criteria for clinical significance".[13][14] It is possible that regular exercise can be as or more effective than medicines.[15][16]

Antidepressants can also be effective at treating the negative symptoms of schizophrenia, such as lack of emotion and lack of motivation.[17]

See the main article on this topic: Placebo effect

Antidepressants (and other medications) that have strong side effects tend to do better than inert placebos in controlled studies, the reason being that if users are experiencing such effects, they are likely to become aware that they are taking the real drug and not the inert placebo. Therefore the best control studies often use "active" placebos that closely mimic the negative side-effects of the drugs.[18] Mental disorders such as depression that can be lifted through a change in thinking lend themselves particularly well to the placebo effect.

Positive publication bias occurs in producer-funded studies, as in many industries. A meta-study by the Federal Drug Administration found that paroxetine (brand name Paxil), for instance, caused a statistically significant increase in erratic behavior, including suicide, in young people.[19]

After four weeks of taking either a SNRI or SSRI type of antidepressant; abruptly halting, drastically lowering your amount, or interrupting your dosages of medication can cause SSRI discontinuation syndrome. The reasons for this are not fully understood, other than deprivation of neurotransmitters in areas that have adapted by becoming accustomed to the them, especially areas involved in mood and cognition (e.g. nucleus accumbens, anterior cyngulate cortex). Double-blind testing with placebos[20] has shown that this condition exists with different medications and has variable intensity depending on the medication being used. The half life of medications also seems to play a large role in the intensity of the symptoms; fluoxetine (Prozac), owing to its long half-life, often shows little to no symptoms once discontinued.

Thus, if you want to stop taking your meds, talk to a doctor first. They can explain how to taper it off to minimize side effects. Discontinuing your antidepressants when you're used to the emotional numbing effects can be very frightening for you and everyone around you, especially if no therapy was involved in treatment.

There are a multitude of symptoms for this condition. They vary from annoying to having a serious impact on a person's ability to function, dependent on intensity of symptoms. Symptoms are as follows:

Sometimes used by woo pushers as proof that Big Pharma is trying to keep you addicted to their stuff. [note 1] However this condition usually can be avoided by simply informing patients what half life their medication is. Some antidepressants have drastically shorter half-lives compared to others, e.g. Effexor: ~17 hours, Prozac: ~1-6 days, medications with shorter half-lives have less tolerance for dose interruptions (forgetting to take your meds). Another way to avoid the condition is to stick to medications that have long half-lives and are more able to tolerate dosage interruptions. If a patient is completely going off their medication than a physician will slowly lower the patient's dose over a period of weeks to months, dependent on reaction to discontinuation and the dose the patient was on to start with. This is called tapering.

For some of the SSRIs, this tapering process can be excruciating despite decreasing the dose in small steps. Paroxetine (Paxil, Seroxat) and Venlafaxine (Effexor) are the most notorious in this sense. The manufacturers often do not deliver dosages small enough to taper. Some agents are available in a liquid formulation which facilitates very accurate dose reduction, but many doctors are not aware of this. You may be able to use a pill splitter to cut a pill in half, though some pills can't be safely split,[note 2] so definitely consult your doctor first.[23]

The effects of discontinuation could be inaccurately labeled as "relapse". A complicating factor is that withdrawal effects can hit not only immediately after cutting the dose, but also with a delay of weeks, or, incidentally months, which leads to confusion in patients who are told that "the medicine is out of the body now". However, withdrawal effects occur because of the absence of the drug, not because of its presence.

You'd think that a scientifically-validated way to help people with depression would be hailed as a (literal) potential lifesaver. But not everyone loves the idea of people taking a pill to make them feel better.

Some claims skirt the edge of mental illness denial. People may characterize depression as "a bad mood" or "laziness" instead of a serious mental health disorder that may wreak havoc on a person's life if left untreated. Or they may claim that antidepressants are just "happy pills" that allow people to avoid their problems. (Remember, taking antibiotics for an infection is just a way to avoid bacteria! Bacteria are part of life! What do you mean, an infection could kill you? You don't get stronger by hiding from the problem!)

Back in reality land, however, finding the right antidepressant can be a lengthy and frustrating process (not the "quick fix" detractors like to claim it is). Nor does it let you avoid your problems, it just gives you a functional brain so you can deal with them.

The real "happy pills" are habit-forming, so doctors don't give them out unless there's a proven medical need.