From RationalWiki
Jump to: navigation, search
This politics-related article is a stub.
You can help RationalWiki by expanding it. 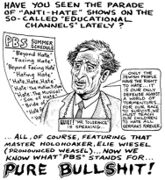 The intersection of PBS hate and Neo-Nazism is beautiful. Also ignorance (or is it mendacity?): it's pronounced "vee-zel".

"Holocaust envy" is a neologism that describes envy towards the Jews, due to the perception that the international community has endorsed the Jewish people since the Holocaust.

The Holocaust has been a political factor up to present day, as there are Jews and non-Jews who use it to support the claims that Israel is needed as a Jewish homeland (see Zionism). Those who use the term Holocaust envy associate it with Arabs, due to the Arab-Israeli conflict.

Holocaust denial can be traced to Holocaust envy. By denying that the Holocaust has happened, one can try to deprive the Jewish people of international support.

Holocaust envy could be compared to fatwa envy, though they are fundamentally different. While Holocaust envy is a desire to receive compassion or compensation, fatwa envy is a desire to use force. In other words, Muslims are envied since a few Muslims kill, while Jews are envied since many of them were killed. One aspect of the latter is the emphasis some Christians put on the (supposed) persecution of Christians during the Third Reich. The problem with this argument, however, is that Christians were not persecuted merely for being Christians,[note 1] whereas Jews were persecuted merely for who they were.