A martyr is one who dies in order to promote or defend a belief or, especially, a religion. Many nations celebrate a version of Martyrs' Day.

Christianity has a long history of reverence for matyrs, who are seen as having made the ultimate sacrifice for their faith. The first Christian martyr is generally reckoned to be St. Stephen, who, according to the Acts of the Apostles, was stoned to death. His lead was taken up by some early Christians who formed what were effectively suicide cults; these were soon suppressed by both religious and temporal authorities.[1] The concept of martyrdom survives to the present day, with the Archbishop of Canterbury's 2015 Easter speech referring to martyrs in the Middle East and Kenya.[2] Martyrologies

are books devoted to biographies of martyrs. Due to the inherently biased nature of the books, promoting specific religious views, the books tend to be hagiographic in nature.

The term "martyr" is quite similar to the Arabic term shaheed (شهيد).

Most Islamic clerics have issued fatwas against the killing of non-combatants and other innocents, and reject the term shaheed for those who have killed themselves and others in the name of Allah.

Islam generally considers any woman who dies during childbirth to be shaheeda. 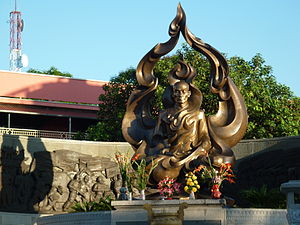 (d. 1963) is often considered a martyr for killing himself in order to bring awareness of the persecution of Buddhists by the Roman Catholic Church (and not the Vietnam War, as commonly believed)[citation needed]. Đức killed himself because he felt no one in the West was aware of the people's struggles and such a dramatic act would bring some media attention and internal pressure. Although self-immolation was not unprecedented in Vietnam, the attention his actions received due to the iconic Life magazine photograph proved him right.