A fanciful depiction of a hoop snake chasing a rabbit

A hoop snake is a cryptid, a legendary or folkloric animal said to be a type of snake that moves across land by biting its tail, forming a circular shape, and rolling like a wheel. It then kills its victims with a stinger in its tail, unrolling and injecting a poison so powerful it will kill a tree if the snake pricks it. Both the rolling motion and the poisoned tail are fictional characteristics not found in actual snakes; real venomous snakes use poison from their mouth or fangs, not their arse. The whole story resembles something produced from that part of the anatomy.

The hoop snake is particularly associated with the "tall tales" of American folklore, placing it in the United States and Canada. Karl Patterson Schmidt traced the myth to earlier reports of the Horn Snake,[note 1] another (non-existent) beast with a poisoned barb in its tail, first reported in a 1688 missive from a Jack Clayton to the Royal Society of London. Clayton's account is far from conclusive: "I never saw any of them unless once, shortly after my Arrival in that Country, which I cannot attest to being the Horn-Snake, for I could not distinctly view it, being in a thicket of sumach; it was perched up about two feet high in a Sumach Branch, its Tail twisted about the Shrub, and about a quarter of a yard stood bolt forward, leaning over the forked branch thereof: I could not see the Horne, with which it strikes, and if it wounds, is as deadly as the Rattle-Snake's Bite. The Gentleman that was with me told me it was the Horn snake; but being in hast, and on Horseback, and the Snake in a Thicket, I could not see the Horn."[1]

The circular shape and rolling motion is a later addition, dating back to J. F. D. Smyth's 1784 book Tour in the U. S. A. The rumor is sometimes linked to the species Farancia abacura and Abastor erythrogrammus.[1] The snakes crop up in various western folklore including the Pecos Bill tales.

According to the Museum of Hoaxes, the hoop snake will pursue prey downhill at up to 60 mph before plunging its stinger into the poor victim's flesh.[2] The Museum recommends climbing over a fence to escape as the snake will be unable to pass between the wires or bars, although since the snake appears to rely largely on gravity to attain such speeds, running uphill would seem a better plan. Other sources recommend hiding behind a tree, which the snake will impale and kill.

Bronx Zoo reptile keeper Raymond Ditmars has offered $10,000 for proof of their existence.[3] None have yet rolled into the Bronx to claim the reward. 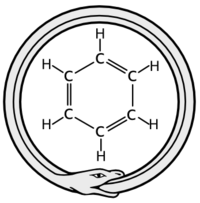 A dream of the Ouroboros

discovery of the benzene ring.

Most snakes move by lateral undulation, and most other land vertebrates walk upon legs. However rolling is not totally unknown in the animal kingdom: caterpillars and other insect larva, myriapods (millipedes etc), lizards, hedgehogs, pangolins, and armadillos may roll up into a ball or circular shape and move either by passively rolling or actively propelling themselves.[4] Snakes have also been known to lie in loops or swallow their tails, but it is unclear whether such a beast would have sufficient rigidity to roll.

The hoop snake's shape resembles the Ouroboros, an ancient and entirely mythical symbol of circularity and rebirth. Norse mythology claims a similar beast girds the earth, although it otherwise fails to resemble the hoop snake. Dogs are also commonly observed to chase their tails, though they seldom catch them.

Scorpions, bees, and a variety of other invertebrates have stings in their tails; snakes (as already mentioned) do not.

(Farancia abacura) found in the southeastern USA is one potential source of the legend. Although it is docile and non-venomous, it reportedly will form into a loop and will also press its tail into your hand if you hold it, which might be mistaken for a particularly feeble attempt at stinging, aside from the absence of any stinger.[5] Despite attempts to find real-life sources, the most likely explanation is not mistaken identity but bare-faced lying by bored cowpokes.