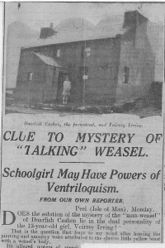 Gef was a talking mongoose made up by an extremely intelligent but bored girl stuck on a remote farm in a place known as Cashen's Gap near the hamlet of Dalby on the Isle of Man in the early 1930s. Aided by her natural talent for spinning tall tales and blessed with a publicity-savvy father, her story was widely promoted by the British tabloid press of the era.[1]

"Rikki-Tikki was awake on the pillow." illustration from The Jungle Book

There's some indication the tale originated when 13 year-old Voirrey Irving, an accomplished rabbit hunter, began saying that dead rabbits she brought home were killed by her friend, a sentient mongoose, and before long she had her parents believing the tale and spreading it to their neighbors.[2] Other accounts speculate that the precocious Voirrey told school chums of her chatty little pal, no doubt inspired by Rikki-Tikki-Tavi, a short story by Rudyard Kipling about the adventures of a spunky young mongoose adopted into a British family. The local kids quickly found entertainment in taunting Voirrey and vandalizing the Irvings' farmhouse. Rural correspondents reported these disturbances and the bizarre story behind them to Isle of Man newspapers like the Weekly Times and Examiner, who were soon claiming an "exclusive" on the story.[3]

The Irvings' farmhouse was situated two miles away from the nearest neighbor and eight miles away from the nearest town, indicating that the adolescent Voirrey was a highly creative girl trapped in a life of isolation and boredom. When one reporter wrote to the Irvings asking for an appointment to meet Gef, the Irvings reported that the weasel said he would comply, but only if the man brought Voirrey a camera and some new phonograph records to listen to.

The British press was only too happy to fuel a story that helped sell papers, and by 1935 news of Gef was appearing in international papers like The Hong Kong Telegraph. A number of "paranormal experts" weighed in with credulous opinions. The family released blurry photos that looked a lot like their pet cat or sheep dog. Bus drivers claimed Gef was making disparaging remarks about them while hitching rides, and bus conductors testified that Gef had stolen sandwiches from their lunch bags.

James Irving had been sending invitations to famed ghost hunter Harry Price for a few years, and Price finally agreed to visit the farm in 1935. Widely known for exposing fake spiritualists, Price spent some time at the Irvings' house hoping to see the supposedly miraculous critter but only received excuses from the family: Gef is on vacation, Gef can't show himself to a doubter, Gef was just here too bad you missed him, etc. Price later wrote that he couldn't decide whether he'd "taken part in a farce or a tragedy."[4]

Price also discovered an interesting feature of the Irvings' farmhouse. All interior rooms of the old stone structure were double-walled with wooden paneling. A generous airspace left between the stone and wood walls helped retain heat in winter, but also "makes the whole house one great speaking-tube, with walls like sounding-boards. By speaking into one of the many apertures in the panels, it should be possible to convey the voice to various parts of the house."[5] However, this was - disappointgly - never tested by Price, Lambert, or any other investigators. It would have been a relatively simple matter for one investigator to stand at the top of the stairs, speaking, whilst an associate stood elsewhere in the house observing the sound and how it travelled around the house.

Some reporters that were "ear witness" to Gef's vocalizations observed that they came from wherever Voirrey, who would typically lag behind them during tours of the home, happened to be located. On such occasions her father would vigorously try to convince them that the sounds came from somewhere else in the house. Die-hard paranormalists refused to acknowledge this all-too-human trickery and instead ascribed it to "typical poltergeist behavior". Some, like Nandor Fodor, happily accepted rumors and hearsay in place of actual evidence, concluding that Gef was "a mongoose who had learned to talk."[6]

By 1939, the Irvings had sold the farm and moved away. The press tried to revive interest by reporting that the new owner had shot and killed a very mysterious creature and Wow Folks, Maybe It Could Be Gef, but other developments soon dominated the attention of the nation's newspaper-reading public. Gef was largely forgotten until the story was rediscovered by Fortean and New Age writers more than a decade later. In 1970, Voirrey Irving told an interviewer that she blamed Gef for her inability to find a husband.[7]

The talking mongoose story remains a cherished favorite in paranormal pop culture and woo circles. Contemporary believers in the paranormal say they can't conclude if Gef was some type of mysterious cryptid or a hoax, because after all, those people said they really witnessed a talking mongoose, and no one's disproven it, so it could be true.[8]

The mongoose also appears in the Lemon Demon song "Eighth Wonder" in which his most famous lines have been recited.