A pterosaur (from Ancient Greek pteron and saurus, meaning "winged reptile") was a member of an order of flying reptiles in existence from 228 to 66 million years ago,[1] until they met their tragic end along with three quarters of other life. The largest genera, Hatzegopteryx and Quetzalcoatlus, might have had a wingspan of over 10 metres, making them the largest known flying animals to have ever lived. They are sometimes called pterodactyls, but that only refers to the genus Pterodactylus or suborder Pterodactyloidea. They are not properly dinosaurs, not being in the clade Dinosauria, but are closely related.

There shouldn't be any debate over whether they are extinct, but there have been a lot of claimed modern sightings.

There have been reports of alleged pterosaurs from the US, Mexico, Crete (Greece), Namibia, and central Africa.[2]

The Young Earth Creationist, Carl Baugh, has carried out investigations trying to find evidence that that pterosaurs are still among us, having supposedly survived on Noah's Ark. His investigations in Papua New Guinea have focused on local legends of flying animals variously called ropen, indava, kor, or seklo-bali.[3] The ropen is claimed to be a large, flying, jungle-living cryptid which is associated by many creationist Christians with prehistoric flying reptiles.[4] Somewhat remarkedly, many accounts claim the the ropen literally glows in the dark - somewhat less remarkedly no credible evidence of its existence has ever been provided.

There are claims that some works of ancient or indigenous art show pterosaurs even though they were extinct long before human beings came along. One example is in Thompson, Utah.[2]

Some suggest that myths of dragons can be attributed to and explained by historical sightings of pterosaurs. They propose that the "fire" could actually be misinterpretation of a smoke-based defence similar to the ink clouds produced by octopuses.[5] Because, naturally, a flying toothed predator - with a ten-meter wingspan - at the apex of the airborne food-chain would want to hide from ... well what?

What proponents of living pterosaurs don't do a good job of explaining is how any pterosaurs managed to survive one of the largest mass extinctions in history, yet have managed to remain at a stable-but-extremely low population for 66 million years. One would think that, after sticking around for so long, they would be a few more members than what necessitates only eye-witness testimonies as evidence.

Pterosaurs weren't exactly small, and the fact that they were an aerial species (as opposed to remaining submerged out in deep ocean water) suggests that there really ought to be some more concrete evidence. 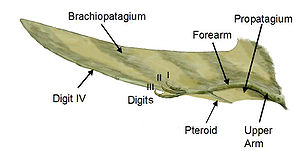 Structure of a pterosaur wing

Pterosaurs have featured in several films including the H Rider Haggard adaptation The Lost World, the original King Kong, One Million Years BC (1966), and Jurassic Park III. Fictional depictions tend to be inaccurate in several respects.[6]

Their wings are typically portrayed as being bat-like, but in actuality differed in many regards. The wing surfaces were held out by only by an extremely long fourth finger with the other three staying free, whereas bats have their second-through-fifth fingers all supporting the membrane. It is also very unlikely that their wing tips were pointed as that could lead to risky stalling.[7]

and other earlier pterosaurs had teeth, their later descendants did not. For instance, the popular large and crested Pteranodon,

whose name means "toothless wing", did not have teeth despite depictions to the contrary.[1]

Only a small number of pterosaurs were piscivores despite a widespread image of them eating fish; and they did not have prehensile claws capable of picking things up and flying away.[6]

In April 2022 reputable paleontologist and biologist Darren Naish has raised a question about the depiction of pterosaur wings as rounded in paleoart.[8] The concern was in itself rather valid, as many paleoart trends have been noted to be exaggerated and/or idiotic, but a number of posts have cited Hone 2015[9] and other papers on the matter. This in turn has lead to a wave of goalshifting on many commenters, usually by focusing on the definition of "convex" and "lobe". This culminated in artist R.J. Palmer calling Hone "a 17 year old on deviantart".[10]

Go searching for sites promoting this and you're bound to come across one attributed to Johnathan David Whitcomb, which certainly explains why they promote the exact same set of books.

The following sites all bear this attribution, though some have other authors as well.