From RationalWiki
(Redirected from Dream)
Jump to navigation Jump to search

Dream interpretation refers to a collection of "therapies" or methods by which a person's dreams are supposedly interpreted.

Dreams have long held a special place in religion, mysticism, and pseudoscience. Since ancient times, enterprising imaginations have regularly interpreted dreams as communication between humans and the divine, as messages from the great beyond or from spirits still walking the Earth, and as prophecies. The ancient Greeks believed that the gods could speak to mortals through dreams. Sleeping and dreaming in temples dedicated to the god of medicine and healing, Asklepios, was thought to be able to cure illness. (The temples were called Asklepeions and the process was known as "incubating".)[1] Aristotle was the first person known to dismiss claims of predictions made in dreams as coincidences.

Similar ideas as those of the Greeks about dreaming have been documented in ancient Egypt, China, and the Middle East.[2] The Chinese (who had systems involving two or ten souls per person[3]) believed that a soul literally left the body during sleep.[4][5] The Bible famously contains a failed prophecy involving the interpretation of Babylonian King Nebuchadnezzar's dream. Dreams play an important role in the Zoroastrian religion.

giving them much value in their lives. They applied the information learned about medicine and rituals from their dreams in their waking lives.[6]

Dream interpretation played a large role in Sigmund Freud's writings on psychological therapy. Freud (1856-1939) regarded dreams as a form of wish-fulfillment which contained both "manifest" and "latent" content. The manifest content was the literal portion of the dream, which consisted of various coded symbols that represented the latent content. The latent content was the true desire or emotion that was being repressed and kept in the unconscious mind. Freud initially called this act of repression "the censor" in his book The Interpretation of Dreams (1899), but later referred to the censor as the work of the ego and super-ego after he developed his three-part system of consciousness. He believed nightmares were the product of the censor repressing this wish-fulfillment.[7] For this reason, Freud made heavy use of dream interpretation in his psychoanalytic therapy.

Carl Jung (1875-1961) grafted his own ideas onto Freud's, modifying them to fit into his concept of archetypes. Jung believed that dreams were not simply wish-fulfillment, but the expression of a person's archetype and shadow forms (these are similar to Platonic ideals). He also believed that one could access the "collective unconscious", or humanity's collective memory, through dreams. He renamed "manifest" and "latent" content to "objective" and "subjective" respectively.[8]

Calvin Hall developed a "cognitive" theory of dreaming in the 1950s.[9] However, he based his work on Freud and Jung, viewing dreams as similarly having symbols that must be decoded in some way to be understood - this idea is not currently accepted within cognitive psychology.

The big problem with Freudian ideas (and their derivatives) about dream interpretation is that they lack the ability to be falsified or replicated (much like the rest of Freudian psychoanalysis). Freud and his followers based their work on specialized case-studies and a good amount of theorizing. 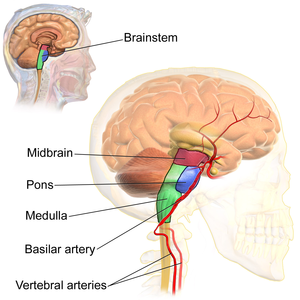 Schematic of the human brain, indicating the pons and cerebrum

The activation-synthesis hypothesis was first put forth by J. Allan Hobson and Robert McCarley in 1977. This hypothesis claims that dreams are essentially interpretations of neuronal activity in the brainstem (specifically the pons) during rapid-eye movement (REM) sleep, and thus they are largely a meaningless jumble of fake sensory experiences. Mark Solms has claimed that, based on his own research, REM sleep is not necessary for dreaming and that the forebrain (cerebrum) does play a large role in dreaming, lending credibility to the notion that there is some deeper meaning in dreams. The Hobson-Solms debate has spanned over multiple decades and still rages on today.[10]

The threat simulation theory (TST) proposed by Antti Revonsuo attempted to take an evolutionary approach to dreams. Revonsuo has postulated that dreaming served an adaptive purpose in allowing humans to "simulate" predatory threats during their sleep and practice escaping them.[11] Mark Solms has criticized TST because threat-related dreams make up only a fraction of total dreams and because TST lacks explanatory and predictive value in a number of other areas.[12]

There are a number of apparent difficulties in conducting research on dreams that have led to a lack of consensus and mountains of contradictory research in the field. Dreams are quickly and easily forgotten (which is why the use of dream logs is common) and memories of dreams may be created from nothing through the process of confabulation. In fact, some research has shown that people forget 95% of their dreams.[citation needed] It is also difficult to generate hypotheses that are falsifiable, testable, and able to be replicated due to the limited ability to observe dreaming under controlled conditions. It's likely that more powerful and accurate brain scanning technology will be required before a consensus can begin to develop on the nature of dreams. There are numerous other hypotheses than the ones mentioned here with their own relevant bodies of supportive and critical research.

You can also go down to your local bookstore and find various "dream dictionaries" for sale claiming to be a reference guide for symbols in dreams so that you can perform dream interpretation on yourself. The fact that the meanings of the symbols can vary wildly from book to book demonstrates the quality and accuracy of these dictionaries.

New Age-type tracts are fond of covering dream interpretation. This often involves various misconceptions about the nature of brainwaves and their relation to sleeping states.