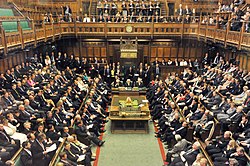 Harry Potter and the Chamber of Hot Air

The House of Commons is the "lower" house (meaning the real power-house) of the UK Parliament. Britons elect its members ("Members of Parliament" or MPs) on a first-past-the-post basis, one member per geographical electorate, at least every five years. Since 2010 the Commons has had 650 MPs.

The Commons started as an intermittent Medieval lobbying organisation - promoting the opinions of elected/appointed representatives to the executive power,[1] the King of England.[2] In a series of gradual power-grabs over the centuries, the House started dictating to the Crown (stopping income, rebelling, denying Divine Right(!), executing one monarch, deposing monarchs[3]) and edging out the House of Lords to become the actual centre of influence and legislation and to incorporate some of its own members - the Cabinet - as the de-facto executive.

Relationship with the Government[edit]

By convention, the Prime Minister holds office so long as they hold the confidence of the Commons. The electoral system generally returns a majority for one or other of the major parties, and the leader of that party is appointed Prime Minister by the monarch. The second largest party forms Her Majesty's Most Loyal Opposition, and has its own "Shadow Cabinet" to reflect the Government Cabinet. In the 2010 election, however, neither party obtained an absolute majority and a coalition government was formed between the Conservative Party, (whose leader David Cameron became Prime Minister) and the Liberal Democrats led by the Deputy Prime Minister Nick Clegg. This state of affairs ended when the Tories took an absolute majority of seats in 2015.

In May 2009 the Daily Telegraph began publishing details of MPs' expenses claims (for the costs of maintaining a second home in London) which had been leaked to it. The Commons had been for some time been fighting a rearguard action against a Freedom of Information Act request by the journalist Heather Brooke for details of these claims. Having lost before the Information Tribunal and the High Court, the Commons authorities decided against changing the law to exempt themselves from the requirements they had imposed on everyone else (which puts them a step ahead of Congressional Republicans in the US) and announced they would publish heavily-redacted details of these claims. However, during the process of redaction a copy of all the claims was made and leaked to the Torygraph.

Among the revelations were that the Home Secretary Jacqui Smith had claimed for two pay-TV pr0n movies (watched by her husband) and 89p for a bathplug, which was ironic since her ministerial position then disappeared down the plughole, followed quickly by her seat in Parliament.

As a result of the revelations numerous MPs decided not to contest their seats at the 2010 General Election, and a number were later imprisoned for making false claims.

Prime Ministers Questions (often called PMQs) is a House of Commons tradition in which Members of Parliament, including the Leader of the Opposition, can put questions to the sitting Prime Minister. Well either that or rant and rave and make spectacles of themselves while trying to score political points[5]

It takes place every Wednesday at noon and usually lasts for thirty to forty minutes.

Opinions of PMQs are mixed among the British public. Many consider it to be an important part of British tradition. Others see it as important for democracy as it allows for heavy scrutiny of the Prime Minister. Some have criticised it for child-like and noisy behaviour from MPs.[6] Others have criticised MPs for attending PMQs while not showing up for important debates.