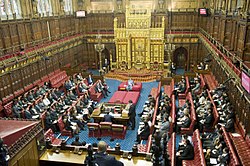 Harry Potter and the Chamber of Uncertain Purpose

The House of Lords refers to the United Kingdom's upper house of parliament and, until (relatively)[note 1] recently, its highest appeal court. The lower house is the House of Commons. Most of its members are appointed by the UK's reigning monarch on the advice of the prime minister.[1] Non-party-political members must be recommended by the independent House of Lords Appointments Commission.[1] The primary practical function of the House of Lords is to scrutinize laws and policies of the government. While it cannot prevent the passage of legislation, it can delay bills or force the House of Commons to hold another debate on previously passed legislation to reconsider.[2]

House of Lords – the judicial bit[edit]

The Appellate Committee of the House of Lords was, until October 2009, the highest court of appeal in the United Kingdom. Its members, the Law Lords (which would make a great band name) were also members of the legislative bit of the House of Lords. Despite a long standing convention that Law Lords take no part in debates on pieces of legislation, it was still generally felt that having judges as members of a legislature was a bit dodgy in a supposedly democratic nation. So, in 2005, they decided to move the Law Lords to a new Supreme Court, which opened in 2009. Basically nothing changed, but things look a bit more legit now.

House of Lords – the legislative bit[edit]

The modern House of Lords functions essentially as an expert advisory body, whose members are appointed for their services to business, to the arts, to technology, to basically anything.

House of Lords – the other bit[edit]

The Lords are often accused of being up to no good. These roughly fall into three groups:

Like most scandals, the media grabs hold of the smallest thing and blows it way out of proportion, leading to mass embarrassment whenever it happens.[citation NOT needed]