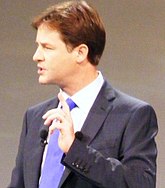 "I Agree With" Old Sir Nick Clegg is a UK politician, the former leader of the Liberal Democrats, the perennial third political party of the United Kingdom from 2007 to 2015, and Deputy Prime Minister in the Tory-led government from 2010 to 2015. The radical student population of Britain, showing their usual nuanced understanding of politics, believe his real name is Judas Iscariot.[1] This photo is going to haunt him for the rest of his natural life.

A relative newcomer to high-profile politics, Clegg was elected to the Commons in 2005 as MP for Sheffield Hallam, after previously sitting in the European Parliament as MEP for the East Midlands; he then took the reins of his party in 2007. Much to the disgust of the Daily Heil,[2] Clegg is a cosmopolitan chap, complete with Dutch mother and Spanish wife, and being fluent in German, Spanish, French and Dutch.

Prior to the 2010 GE, practically no one knew who Nick Clegg was, with the name being just vaguely associated with a long string of Lib Dem who wasn't, you know, whatshisname, or whoever, or that alcoholic one, or that really old bloke with the funny name, or the guy who shared his surname with a more famous Kennedy (or was that the alcoholic?). His significance came from being a fresh-faced third-party politician who was allowed to publicly debate Cameron and Brown. His pwning of both made him a rising star overnight, and here we are now. Before becoming a member of Parliament, he was a member of the European Parliament; in future he plans to work his way up to Sheffield City Council.

Following his showing on the first leaders' debates he went from being an unknown to being the most popular leader since Churchill,[3] by virtue of a single TV debate, in which he was less terrible than Brown attempting to smile or a David Cameron 2-D hologram. He also did well in the second and third TV debates.

He promised "no more broken promises" and that he would "break the mould of British politics" (they always promise this). Clegg also promised block tuition fees. What he meant to say was no tuition fees if we win this election. He didn't expect to end up in a coalition.

The Lib Dems actually got fewer seats in the election itself, despite increasing their share of the vote. First Past The Post does things like that. A lot. (If there were proportional representation, most of the most recent governments of Britain would have had to rely on some form of coalition, most likely with the Lib Dems.) Following the election, there was no outright winner and there was a slightly confused period of negotiation followed by Clegg acting as Kingmaker in the 2010 election.

In power, they did much to moderate the Conservatives, but since they were small in comparison—with Labour in support of many Tory policies—there was only so much they could do. The Lib Dems were destroyed in the '15 general election. Most of their voters had become disillusioned with the "neoliberal" drift of the party since Clegg became leader. In essence, the Lib Dems were seen as enablers. Clegg defended his record as necessary to stabilize the economy—before resigning.

Every time you read something about regressive changes to Britain's economy—forcing housing associations to sell to private brokers, cutting benefits for poor families, quietly scrapping poverty/environmental targets ("red tape"), raising tuition fees, privatising schools, reducing service levels in the NHS, or removing workers' rights—that is what the Tories always wanted. That is what Britain would have had in 2010, were it not for the Liberal Democrats.

Nursing himself in a mansion in Spain. It seems he's stepped up his public visibility recently. No one's sure what he plans to do with it, though.

He frequently disparages the Tories in public, while ridiculing the idea that Brexit will do anything to curb immigration.[5] At the moment, Clegg and Farron are heroes for trying to put a second referendum on the agenda. The fact that Labour hasn't explicitly done the same is a reason for them to coordinate with the Lib-Dems. Unfortunately, that doesn't guarantee you much these days, as people are voting en masse against their own interests.

He also got a knighthood - maybe someone should've mentioned that he had already fallen on his sword.

In October 2018 Clegg was hired by Facebook as the head of its global affairs and communications team.[6] Just like Tony Blair before him and David Cameron aka Dave Cameron after, he eventually followed the money.

The Scottish Tory leader Annabel Goldie[7] described him as an "immensely irritating" and "tiresome" insect.[8] But then, she would.

His new coalition partner, David Cameron, was once asked for his favourite political joke. He replied, "Nick Clegg, at the moment."[9] He took this back when he desperately needed Nick to get in the door of Number 10, surprisingly enough.