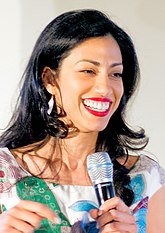 Huma Mahmood Abedin (1976–) is a longtime close adviser to former First Lady, Secretary of State, and Democratic presidential candidate Hillary Clinton and the most distinguished American with both the FBI and the Islamic State on her ass.[1][2] She was married to former US Representative Anthony "The Mongoose" Weiner.[3]

This united States politics-related article is a stub.
You can help RationalWiki by expanding it.
Retrieved from "https://rationalwiki.org/w/index.php?title=Huma_Abedin&oldid=2255192"
Categories:
Hidden category: