The National Rifle Association (NRA) is an American corporate shill political action group that has sold more guns than Sam Colt and Bill Ruger.[4] Originally (until the 1977 Revolt on Cincinnati[5]) it functioned as a relatively moderate organisation,[6] sometimes said to focus on rifle marksmanship and not even mentioning the Second Amendment or gun laws (although the latter has been disputed).[7] The History News Network has stated that once, at least from the 1930s, they basically concern-trolled about "bad" and "unreasonable" gun laws while presenting themselves as supporters of "reasonable" firearms controls and fear mongering about the “attempted dictation of anti-gun cranks and pacifists who are ‘out to outlaw firearms’”, thus watering down much proposed gun legislation.[8][9] But... the NRA no longer represents hunters and collectors, having been taken over by investment groups which own large percentages of most firearms/ammo companies.[10][11] Not surprisingly, it promotes ownership of guns in the United States at all costs (as long as the industry receives your costs of course), has a knee-jerk reaction against the most mild proposals for gun-control legislation, or even against the enforcement of existing gun laws.

They are not well known for teaching their members how to properly debate (shout at) proponents of increased gun control, and as a result, most NRA members resort to clichés such as "guns don't kill people, people kill people", "the only way to stop a bad guy with a gun is a good guy/woman/toddler(?)[12][13] with a gun",[note 1] and other empty platitudes. Their ultimate goal is to bring about a world where it's socially acceptable to be armed at all times,[15][16] and if a "citizen" circling your neighborhood with a boomstick makes you uncomfortable, you're a cuck who hates freedom.[17] (Of course, if it was a good black guy doing the same thing with the same motive, the situation would be handled much differently.)[18] Achieving a world where everyone is armed at all times is to have everyone buy guns, hence the NRA pushes hard for unrestricted gun-ownership.

After the Sandy Hook massacre, which claimed 20 children as victims, the NRA finally shut up ... for a few days. Many naïvely hoped they had finally come to their senses, but instead, the group used their next meeting to call for more guns to stop gun violence, and blamed the massacre on everything but guns, including mental illness, violent video games, and movies. While clamoring for a national mental health database, they naturally recoil at the thought of a gun registry, and as of this writing, their National Firearms Museum, which glorifies violent movies, is still open for business.[19] Their response to the Marjory Stoneman Douglas High School shooting of 2018 is similar, although they're facing companies that have announced to sever ties with them as well as a more unified protest by survivors of the shooting and gun control advocates.[20] The NRA has also enlisted the aid of Wolfgang Halbig, a conspiracy theorist who claimed that the Sandy Hook massacre was a hoax.[21]

The NRA also has a 500+ entry-long list of people and organizations who have ever lent support to anti-gun initiatives.[22] With luminary freedom haters such as the American Medical Association, PBS, and Hallmark, and notorious anti-gun celebrities like... Sylvester Stallone, it's probably easier to say who is not on this list. Nixon at least tried to keep his enemies list secret.

As seen from the two terms of the Obama administration, "No new laws" somehow means "future gun control laws" for those guys. This despite the fact that the related constitutional amendment purportedly allowing gun ownership does not explicitly define what "arms" are. (Suitcase nukes anyone?)

This contrasts with the NRA's stance during the Clinton years, when they advocated more vigorous enforcement of existing gun laws as an alternative to passing new ones. 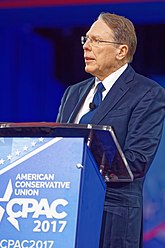 The NRA has an insanely large board of directors (76 members!), and has included many questionable people on it, such as noted traitor Oliver North, a spokesman for gun manufacturer Glock (supporting accusations of the NRA having too-close ties to gun manufacturers), the perpetually batshit Ted Nugent, Larry Craig (of "I am not gay…" fame), and Grover Norquist (because no mainstream right-wing group is complete without a guy who really, really hates taxes).[23]

Oliver North, hero of the far right and whose "very name is synonymous with corruption and disgrace," ascended to the presidency of the NRA in 2018.[24] Charlton Heston was a former president of the NRA, famous for his "cold dead hands" speech. The group's main talking head is Wayne LaPierre, a perennial member/vice president prone to conspiracy theory, groupthink, and pulling bullshit out of his ass. Despite his media reputation as the "craziest man on earth", he's actually a donnish businessman, just like any other fearmonger you can think of.[25]

In 2019, president North was ousted as president after he was accused by executive vice president LaPierre and the NRA Board of extorting the NRA; LaPierre was also accused by North of making financial transgressions.[26] Leaked documents reveal a "culture of fear" in the organization, where employees suffer with low wages and problems with the pension system, while LaPierre enjoys lavish benefits and one of the highest salaries in the country for nonprofit organizations.[27] Despite being so well paid, LaPierre reportedly billed $542,000 with of clothing, travel, and other expenses to to NRA's longtime advertising agency, Ackerman McQueen; as of 2019, Ackerman McQueen is part of a lawsuit against the NRA.[28] LaPierre reportedly spent $39,000 in one day at a single Beverly Hills luxury menswear boutique.[28] That's an interesting shopping addiction that LaPierre picked up while working for an organization that became based on scaring their membership that the "elites" would take away their guns.[29]

In August 2020, the state of New York (where the NRA was incorporated), after analyzing the finances of the charity, actually had enough of NRA's financial bullshit to sue to completely dissolve the NRA in its entirety due to the widespread abuse of charity money, and asked that chief executive Wayne LaPierre and other current and former executives to personally pay back unlawful profits. [32] In the court document, [33] LaPierre is accused of massively misusing NRA charity funds to illegally grift insiders and select vendors, as well as fund at least eight personal family vacations to the Bahamas, along with various other big game safaris and other private travel. LaPierre and other executives used a "pass-through arrangement to conceal private travel and other costs that were largely personal in nature", thus "exposing the NRA to millions of dollars of potential liability for violation of IRS reporting requirements". LaPierre and other executives also failed to report to the IRS and/or miscategorized many other personal or out of pocket expenses, such as the lavish Christmas gifts he would often give senior executives at the end of the year. [33] Washington DC's attorney general followed this up by suing the NRA Foundation and the NRA for misuing charitable funds to support wasteful spending by the NRA and its executives. [34] 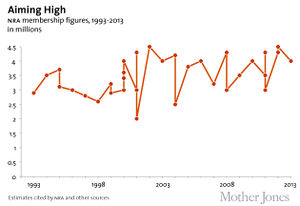 The NRA has long been viewed as a mighty Goliath in US politics;[35][36] politicians feared their piles of lobbying money and the wrath of their four million-strong membership base. However, in the aftermath of the Aurora and Sandy Hook massacres, their self-proclaimed political influence and membership figures have fallen under scrutiny.

While the NRA claims to be able to elect politicians they support between 71% and 86% of the time,[37] third parties have pegged their success rate at a hilariously abysmal 0.83%.[38] The NRA's membership figures are also suspect; they usually claim about 4 million members, but reports from insiders, as well as outsiders reading between the lines, suggests these numbers are greatly inflated. The NRA has a very loose definition of "membership" that includes gun purchasers automatically enrolled as a promotional gimmick, long-dead members, and subscribers to their magazines. The best guess as to their true size is at most 3.1 million.[39]

On top of this problem, the NRA is suffering internal strife, with a large disconnect between what its official leadership wants (it being far too cozy with the gun industry) and its own membership base.[40][41] As a result, not only is it spending its lobbying money ineffectually, but it can no longer even count on its own members to vote in support of its policies.[42]

In the wake of the Marjory Stoneman Douglas High School shooting, the NRA has suffered from significant pushback. The amount of money it had donated to Florida lawmakers was brought to media attention and fell under heavy scrutiny. Governor Rick Scott, who had been revealed to be in their pockets for some time, did not help matters, as when asked for a statement following the shooting, he said the time for a conversation about gun control was in the future, and when asked on perpetrator Nikolas Cruz's ease in obtaining a weapon, he dodged the question and said an investigation was underway.[43] Surprising no one and unmatched in tastelessness, the NRA retaliated against the student activists who survived the shooting after they held a town hall against Republican lawmakers, claiming the students wanted more restrictions on law-abiding gun owners.[44] As a result of these skeletons in their closets and their feeble attempts to brush it all under the rug, numerous corporate sponsors announced they were severing ties with the NRA, who, true to form, spat out the same drivel about how their law-abiding members were not at fault, criticizing everything from the police, the number of doors on the building, and even the school's preparedness in handling a school shooting but refusing to acknowledge the role of guns in the massacre.[45]

Activities that aren't (too) political[edit]

The NRA supports firearms education for both children and adults and occasionally makes contributions to the Boy Scouts of America and other organizations.[46] Despite their highly politicized nature, their education programs are usually sound in both concept and execution and do a generally good job teaching the fundamentals and importance of firearms safety. This, of course, is doing fuck-all to reduce the proportion of gun crime.[47][48][49][50]

In response to the "left" pointing out that prayer and belief in a deity wasn't going to solve mass shootings, the NRA tried to expose the "godless left", stating, "These saboteurs share the same fanatical fervor to tear apart the foundations of America as the terrorists who threaten our very survival. And together, they march hand-in-hand toward the possible, purposeful destruction of us all." They even went as far as to call certain "leftist" media "false prophets" and "infidels of freedom" as well as several similar claims about the left and their attacks on American values.[51]

The FBI has been investigating whether Russia illegally funneled money through the NRA to help Trump get elected.[52] Specifically, Alexander Torshin

(Мария Бутина) were being investigated, who are the only two people from the Russian Federation that are lifetime members of the NRA.[52][53][54]

On July 15, 2018, Butina was charged with "conspiracy to act as an agent of the Russian Federation, and was ordered held without bond."[55] At her detention hearing, the FBI alleged that Butina has extensive contacts with the Russian FSB spy agency, and she has exchanged sex for business (presumably espionage) purposes, including an ongoing relationship with a Republican operative.[56] In 2019, Butina was sentenced to 18 months of prison.[57]

Torshin is a former Russian senator and longtime ally of Vladimir Putin, and has been accused of having ties to Russian organized crime.[53][58] Torshin is currently the deputy governor of the Central Bank of Russia.[53] Torshin attempted to meet with Trump Sr. and did meet with Trump Jr. at an NRA event.[53]

Things the NRA and their supporters blame gun violence on[edit]

In spite of their rhetoric of firearms support when it concerns whites the NRA administration is pretty enthusiastic about taking away firearms from black people. From historic events such as the supporting the Mulford Act

for no other reason than to take away guns from the Black Panther Party all up to the present day where they campaign by using Black Lives Matter as an argument for the legality of firearms. [73]