From RationalWiki
(Redirected from Humanists)
Jump to navigation Jump to search

Humanism is the philosophical stance that emphasises human fulfilment and scientific inquiry, and it maintains that human reason must help us act morally.

It is often associated with empiricism and rationalism, however rationalism does not necessarily have any moral implications. It is also associated with atheism and agnosticism, specifically in the guise of secular humanism, although the two certainly aren't the same thing; humanism is where atheism and agnosticism would turn to for moral guidance, as it can't really get it from a divine source, for example.

What do we mean by "humanism"?[edit]

Traditionally the term humanism has referred a non-religious worldview which looks to science and reason for guidance and rejects religious explanations of the world, although nowadays more and more people who believe in God are likely to call themselves "humanists". There is no formal connection between "humanism" as describes the secular movement and the humanism associated with medieval Christian scholars ("Renaissance humanists"). Both terms entered the English language from translations of the Latin humanitas, with humanist in the sense of Renaissance humanist only taking the form "humanism" some time after the arrival of the term humanism as describes the non-religious worldview.[1] The term secular humanist was invented in 1961 as a negative intensifier for "godless" humanists, and thereafter often used as a snarl word among the Religious Right, but was subsequently adopted by humanists in the United States either as a badge of pride or to distinguish themselves from emerging ideas of "religious humanism", as distinguished from the newly-conceived of "secular humanism".[2]

Humanism is typically used not as a self-consciously adopted label for belief, but rather as an "analyst's category". This is to say, many people are humanists or would think in "humanist ways" without being aware of the term. The extent to which a person or thing can call itself humanist relates precisely to how well it fits a description of Humanism.[1] A good all-purpose description of Humanism is of a naturalistic point of view which eschews superstition and dogma in favour of knowledge acquired through science and reason, and which uses empathy rather than norms based on authority or conventional wisdom to determine what is ethical behaviour.

Quite apart from humanism in the modern sense, the Renaissance "humanist" movement began in Italy in the 14th and 15th centuries. The rise of wealthy merchant classes in city-states such as Florence and Padua increased demand for notaries and other bureaucrats, which in turn increased demand for educational institutions. The nascent humanist movement sought to revolutionize education by opposing the scholastic philosophy of the age and returning to classical Greek and Roman texts. Renaissance humanists such as Petrarch, while remaining devoutly Christian, put more focus on worldly affairs and human morality as opposed to supernatural matters. Christian scholars such as Desiderius Erasmus were generally reformist Catholics who opposed Protestantism and instead sought to reform the Church from within.[3]

The term "humanism" as a coherent descriptor for pre-existing non-religious, rational worldviews came into use in the 19th century (predated by an older Christian Renaissance movement, as exemplified by Desiderius Erasmus

This movement was emphatically atheistic and emerged in practice from the Ethical Culture movement of non-religious congregations in the United States and United Kingdom, which had been influenced by Augustus Comte

's idea of a "Religion of Humanity". The 20th century saw Ethical Societies take on new identities as humanist organisations, which self-consciously abandoned their semi-religious trappings (as exemplified by the British Ethical Union becoming the British Humanist Association, and setting itself out as a public advocacy and charitable organisation). In America, there was no straightforward transition from Ethical Culture to Humanism, leading to the existence of both an American Ethical Union and an American Humanist Association, although both of these organisations today do similar work and describe themselves as humanist groups. This change was signalled by the launch of the Humanist Manifesto

at a University of Chicago Conference and then by the founding of an International Humanist and Ethical Union to act as an umbrella body for the global organised movement.

Some variants of humanism have sought to create secular replacement for rituals traditionally performed by Christian clergy and officials of other religion. Humanist weddings have become very popular in some countries such as the United Kingdom: they typically have a ceremony conducted by a celebrant or officiant, probably with some music and readings or speeches.[4] Humanist funerals are also conducted by organisations such as Humanists UK, which professes to offer "meaningful non-religious ceremonies just for you". These include some elements found in Christian funerals, such as music, readings, and speeches by those who knew the deceased, but with a focus on celebrating the person's life and legacy, rather than any attempt to relate the death to a religious faith or provide justifications based on God or the afterlife.[5] 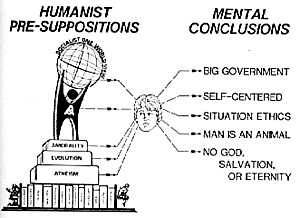 Some fundamentalist propagandists will try to scare you with a document called the Humanist Manifesto.

It really isn't that bad, though not every humanist is going to agree with it as it was written by religious humanists. It just sounds scary because it ends in "-ist Manifesto." Go on, read it. Them, actually; there's three of them. It won't hurt you. Though you should probably also read A Secular Humanist Declaration and the IHEU's Amsterdam Declaration 2002 as well.

Answers in Genesis claims — and will continue to claim, provided they survive the financial year — that humanists are in league with Satan.[6]

Antihumanists oppose humanism on philosophical grounds, arguing that "human reason" is only an illusory source of morality, as it is only a reflection of societal norms and social practices and nothing intrinsically special. Philosophers such as Michel Foucault argued that humanism presented a teleological narrative of history focusing on "progress" and that humanism promoted an essentialist concept of human nature. Animal rights activists also criticize humanism on the grounds that it is speciesist.