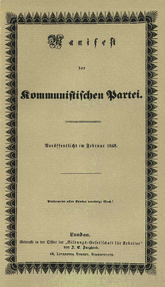 It's a first edition!

The Communist Manifesto (originally titled Manifesto of the Communist Party; German: Manifest der Kommunistischen Partei) is a thirty or forty page political manifesto (who'd have thunk it?) written by Karl Marx and Friedrich Engels in 1848, describing the basic worldview and dogmas of communism, including class struggle, how capitalism had destroyed all the illusions of feudalism (the family with only one breadwinner, for example), an exact description of communism, and a rant on how bad all other forms of socialism are. The style of the manifesto varies between propaganda, scientific paper and an angry rant by two grumpy old men (although Marx was 30 when he wrote it but he outlived many real workers).

Readers should also be aware that the Communist Manifesto wasn't Marx's serious political work. His political theories were explained thoroughly in Das Kapital — the Manifesto was thrown together in a hurry for the masses, because there were major revolutions going on in that year (though they were all eventually squashed) and they didn't want to be late to the party. A serious treatment of Marx's ideas, then, should focus more on Kapital, provided the reader can stay awake (it's a long, boring read!).

The Communist Manifesto is divided into four sections:

This communism-related article is a stub.
You can help RationalWiki by expanding it.
Retrieved from "https://rationalwiki.org/w/index.php?title=Communist_Manifesto&oldid=2210549"
Categories:
Hidden category: